Killed after posing for pictures, the five-year-old victim of Russia's airstrikes on Syria


ive-year-old Raghat loved singing, nail polish, teasing her toddler sister, the alphabet she was starting to learn at nursery, and goofing for the camera. In the last photos of her, taken barely 10 minutes before the Russian bombs landed, she shows off a new bracelet and freshly painted nails with glee, then squeezes a kiss from her squirming baby sister.
“I only took my children back to Syria for six days,” says her mother, Suheer, her eyes welling up as she plays a video on her smartphone, bringing a shadow of her daughter momentarily back to life. Her son Hossein, only four himself, leans in to smooth away her tears. Too young to really understand why his sister has vanished, he comforts his mother with a soft patter of “mummy, no, mummy”. 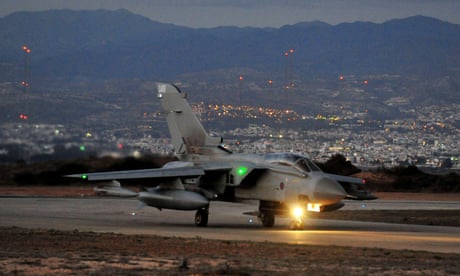 Ministers say it could take two years to destroy Isis

Read more
Raghat now lies miles away, across the Turkish border in Syria, buried in the town of Habeet, near Idlib, where she died in October alongside her grandfather and her cousin Ahmad. When the attack finished she was found wrapped in Ahmad’s arms. A 28-year-old maths teacher, he had tried to race her to shelter when the first bomb fell.
They made it to a small dugout in the garden, but a bomb landed just beside the entrance, and Ahmad’s body was not a strong enough shield. Raghat survived the first blast, but died on the back of a motorbike as her family raced her to hospital. “We were supposed to be going home the next day,” Suheer says. “My husband never saw his daughter again.”
The family are one of hundreds ripped apart by more than two months of intense Russian bombing raids on opponents of President Bashar al-Assad, which victims and fighters say have strayed far behind frontlines. Coalition airstrikes led by the US have also killed civilians, but have stricter rules of engagement. There have been no reports of civilian casualties from the airstrikes launched on the al-Omar oilfield by British Tornado jets this week.
Syrians say that Russians are not only reckless about choosing targets, but also appear to be intentionally bombing some civilian areas.

Survivors, doctors treating the injured, and local commanders believe the Sukhoi jets, flying from a new airbase in the coastal Latakia province, are hitting homes in a deliberate campaign to break fighters’ morale and depopulate swathes of the countryside.
“They are targeting the civilians at night, and mostly frontlines during the day,” says Abu Hussain, a Turkmen rebel commander, a high-rank defector from the Syrian army. “It’s because they don’t want anyone to film the jets bombing at night, so you can’t prove their identity.”

That matches images and accounts of the airstrike on Raghat’s house, which her brother says began moments after 9pm on 1 October. In one of her last photos, she holds a lit torch, and video he says was shot soon after the bombing shows flames raging through the house against a dark sky.
Russian airstrikes killed at least 295 Syrian civilians in October alone, according to monitoring group Airwars, which keeps an extensive database of images, videos, reports and biographies of the dead.
“Based on all field reporting, the number of alleged civilian casualties attributed to Russia is many times what we see being claimed against the US-led coalition,” says Chris Woods, who runs the Airwars project.
“We think the primary reason here that the casualties are so high is the type of munitions that Russia is using, mostly ‘dumb bombs’ which almost always mean more civilian deaths. That is closely followed by where and how Russia is bombing. There is no doubt that Russia is bombing civilian neighbourhoods.”
Their assessment of the strike on Habeet matched Raghat’s family’s account, and ties in with Russian reports of bombing raids in the area, they say. A Syrian monitoring group also confirmed details of the attack, and a prominent human rights activist still working inside Syria videotaped the aftermath and photographed the little girl’s body.

The family, who asked for their surname to be withheld to protect relatives still in Syria, didn’t expect a bombing raid even though Russian planes had been buzzing around the area for four days, apparently doing surveillance. President Vladimir Putin had said his fighters would be targeting “terrorist groups”, and the family’s home was more than 60 miles (97km) from the nearest Isis forces. 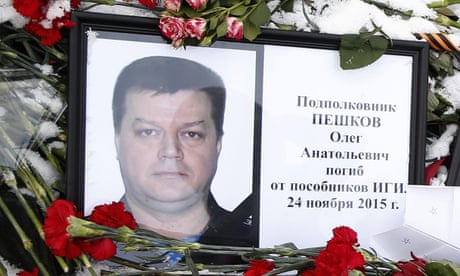 Read more
Even as it became clear that Russian planes were more focused on tackling Assad’s opponents than Isis, the frontline was still several miles away. It would take days for civilians to realise they were firmly in the bombers’ sights, because of confusion about targets and the slow and unreliable trickle of news out of Syria.
Many working in overwhelmed hospitals, providing relief or ferrying the worst injured across the border into Turkey, fear the deaths have barely registered in western capitals obsessed with tackling Isis, and almost oblivious to the civilian deaths caused by Russian bombing.
“Its been 48 days with no one talking about it,” says Abu Hamza Suleiyman, a doctor at a Syrian field hospital near the town of Jisr al-Shughur, another area targeted by Russian bombers. “There are almost no civilians left in their homes because they bombed almost every single village.
“I could understand the frontline, but the civilians? One landed just outside a maternity hospital. This is the worst experience in the last four years. I’m from a small village in these mountains, and for ages no one has bombed this village, but when the Russians started bombing they hit every single village.”
The killings already appear to be entrenching the war and fuelling radicalisation. Anti-Assad fighters seeking revenge and disturbed by the flagging strength of their own groups, seek to ally with opposition forces that are well-supplied and confident in Syria – among them Isis.
“Isis are not very good, but a lot of people think they are doing the correct thing against the regime,” says Raghat’s older brother Ali, a fighter with the Free Syrian Army whose two younger brothers now want to join him on the frontlines to avenge their family.
Ali, who was not at home when the strike hit, fears other families may look for even more radical solutions. “There is no Isis in our area at all, but there is going to be soon.”
Their grandfather, 56 year-old Abdul Razzaq, was one of the first civilian victims of the Russian raids, hit in the Habeet strike as he tried to race down from the top storey of the house. Most of the family were already downstairs and managed to dash to safety, leaving only Raghat, her cousin and 49 year-old grandmother Zahra, who had been in another part of the house and decided to head for the dugout in the yard.

As they fled, a shell landed just behind Zahra, knocking her to the ground, destroying her hearing and peppering her with shrapnel. It nearly killed her, but probably also saved her life, because just as Ahmad and Raghat thought they had reached safety, another blast hit the shelter directly.
Zahra’s search for treatment took a long, painful night of racing across northern Syria, on roads so bad she broke an arm, because some hospitals have beentargeted in airstrikes and others are overwhelmed by casualties of the bombings. 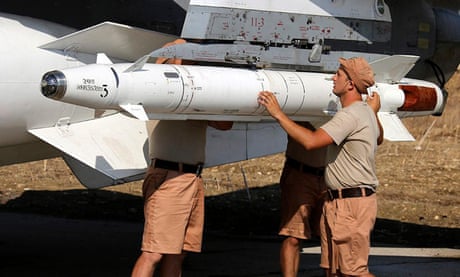 'More than 90%' of Russian airstrikes in Syria have not targeted Isis, US says

Read more
Ali raced her 15 miles to the nearest medical station, but doctors there could do little more than stabIlise her for a three-hour drive to the Turkish border, in an ambulance that was more like a truck.
A drive in darkness, haste and confusion was followed by three hours waiting at the border, moaning in pain and terrified she was dying. They were finally escorted across the border to begin treatment, but two months later she still has no movement in one arm, and can barely walk because the sores and burns on her legs are yet to heal.
They were only in the path of the bombs because the war has dragged on so long. The whole extended family fled to Turkey in 2012, but two years ago pension payments to Abdulrazzaq, a retired officer in the Syrian military, were stopped by the government.
Only Suheer stayed with her husband, who had found a job in Turkey. She missed her parents and siblings badly, though, and after two years persuaded her husband to let her take the children back to celebrate Eid. They crossed back into Syria days before the Russian campaign began.They could no longer afford rent. But, anxious to avoid the grim refugee camps and reassured that their home was under firm rebel control and had never been bombed or taken by the regime, they decided to risk returning.
Raghat died in new holiday clothes and a bead bracelet bought by a favourite aunt, Rasmea, who studied computer engineering before the war. “We were shopping, came home, did some pictures, and then – the end,” she says. She still wears her niece’s bracelet, faded now to dull browns and blacks. Her Facebook profile picture is a montage of images of Raghat, both radiant in life and mutilated in death.
“Why are the Russians bombing Syrian people, what have we done wrong?” she says, on the verge of tears. “We want people to see what is happening in Syria, please tell the world.”
Muhammed Almahmoud contributed reporting
Posted by Tony at 7:35 AM