'Hell itself': Aleppo reels from alleged use of bunker-buster bombs


Residents of the Sukkari neighbourhood attend to one of the wounded after the detonation of an alleged bunker buster bomb. Photograph: Omar Arab
Link


The roar of the explosion was unlike anything Abdulkafi al-Hamdo had heard before. Stones from a kilometre away fell in front of the home where the teacher had taken shelter with his wife and seven-month-old daughter.
Arriving at the scene in the early afternoon on Friday, he took in the destruction of the Mashhad neighbourhood of eastern Aleppo, and the crater left following the bomb. It was the first time, the opposition claimed, that they had documented the use of bunker buster bombs in Syria’s second city.
Known in Arabic as al-qanabil al-irtijajiya, “the bombs that shake”, bunker busters are designed to hit targets deep underground. The Russian models can weigh more than a tonne and penetrate two metres into reinforced concrete.
Russia has not admitted to using the weapons, but at the UN security council on Sunday the US and Britain accused Moscow of deploying explosives “more suited to destroying military installations” to destroy homes and decimate bomb shelters.
When Hamdo saw the impact that one of them appeared to have had on Mashhad, he despaired. Schools, orphanages and hospitals in Aleppo that moved underground to escape the destruction around them now feel that even they are at risk.
“When I saw it I thought, my God, is it possible that there is so much destruction here and nobody wants to help us?” he said. “At that moment I knew that the international community had sentenced us to death, that we would be recorded as martyrs that they will weep over at some future date.”
Two other bunker busters allegedly fell that day, one in Sheikh Khodor and the other in Tariq al-Bab, both in the besieged, rebel-held eastern suburbs of Aleppo. In an image from the scene of the latter, a man stands in the middle of the crater, dwarfed by its scale.
Airstrikes have tormented the people of Aleppo’s eastern districts for five consecutive days, claiming hundreds of lives and wounding many more, with a ferocity that local people say is unrivalled since the beginning of the revolution turned civil war more than five years ago.
The city, once Syria’s bustling commercial capital, is divided into east and west, held by rebels and the government of Bashar al-Assad respectively. The eastern part has been besieged for three months.
The latest campaign comes after the collapse of a brief ceasefire negotiated by Moscow and Washington, and Assad’s government has vowed to reclaim the whole city, apparently no matter the cost.
Eastern Aleppo has endured years of destruction, the ruins of districts having been repeatedly bombarded with barrel bombs, and more lately phosphorus and incendiary munitions, which have left them in flames.
The images of the past week have been unrelentingly horrifying. In one, civil defence workers find a mother holding her infant under the rubble, dead and covered in white dust. In another, five bodies from the same family in a rebel-held town just outside Aleppo lie in white shrouds, the child’s burial cloth conspicuously smaller.
There is a new awe and horror in residents’ voices as they describe the impact of the bunker busters. “We are standing before inhumanity, real massacres, extraordinary weapons whose blasts we never heard before. They make the ground shake beneath our feet,” said Mohammad Abu Rajab, a doctor in one of the largest medical centres in eastern Aleppo.
At a UN security council meeting on Sunday, the UK and US condemned the use of bunker busters. Samantha Power, the US envoy, condemned the barbarity with which she said Russia was prosecuting the war on behalf of Assad.
“Bunker-busting bombs, more suited to destroying military installations, are now destroying homes, decimating bomb shelters, crippling, maiming, killing dozens, if not hundreds,” said Matthew Rycroft, the UK ambassador to the UN.
Residents of eastern Aleppo have often come up with new solutions to survive the onslaughts on their neighbourhoods. Moving below ground had, until now, been one means of protection. 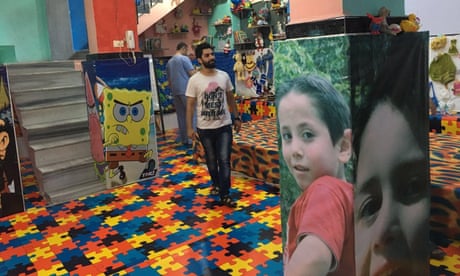 Read more
“I’ve been in Aleppo for five years and I’ve seen a lot of bombing, but the destruction of these bombs, I have never seen before,” said Omar Arab, a journalist who lives in the Mashhad neighbourhood and witnessed the destruction there and in the neighbourhood of Sukkari, where the opposition says a bunker buster bomb was used.
Even the dreaded barrel bomb, a cylinder packed with explosives that is pushed out of planes and helicopters and is woefully inaccurate, does not inspire as much fear.
“There aren’t that many shelters, and anyway the greater fear is that they’ll bring down entire buildings,” said Arab. “After all, a barrel bomb brings down two floors in a building. In the bombing in Sukkari, it brought down a building that was six storeys high. I see body parts every day, but it has terrified me.”
“It’s like an earthquake when it lands,” said Aref al-Aref, a resident of eastern Aleppo who lives close to Tariq al-Bab, the site of another alleged bunker buster explosion. “It’s the first time we see something with this destructive power. It’s a war of extermination in every sense of the word.”
For those who continue to brave the assault on eastern Aleppo, it is clear the scorched-earth campaign, including the alleged use bunker busters, has the sole purpose of frightening residents into submission. 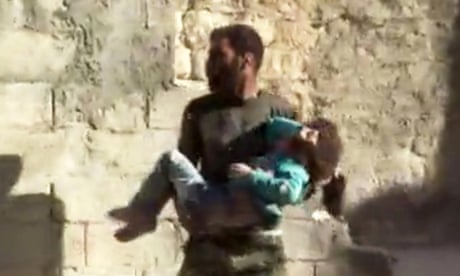 'Is this civilisation?' ask residents as Aleppo reels from relentless shelling

Read more
The government has succeeded in recent weeks and months in reaching surrender deals with rebels living under protracted siege – in al-Waer, a rebellious Homs neighbourhood, and Darayya, a Damascus suburb that relented last month after a four-year siege.
Residents believe it hopes to do the same in Aleppo. The government has already asked civilians who wish to escape the carnage to flee via designated corridors leading towards government districts.
“The goal is to displace people,” said Arab. “People were terrified by this new type of bomb. They want to commit larger massacres so people flee.”
Indeed, that may be the only way to reclaim eastern Aleppo, a grand prize for a government hoping to relegate the rebellion against it into a rural insurgency, while controlling urban centres.
“The only way to take it is with such a monstrous atrocity that it would be remembered for decades or generations,” said one western diplomat with knowledge of the ceasefire talks, when asked about the government’s campaign.
“I was not surprised by Russia using it,” said Hamdo. “They’re a murderous, criminal state. But I was surprised that the international community let it use those weapons.
“The mask fell a long time ago from Russia and the regime, but now the mask has fallen from human rights defenders, from the international community. This is hell itself.”
Posted by Tony at 11:05 AM