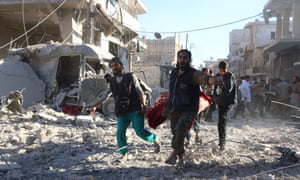 The largest hospital in the rebel-held side of Aleppo has been devastated by barrel bombs, witnesses have said, as forces loyal to the Russia -backed government intensified their assault on the area with a major weekend offensive.
The crucial facility, known as M10, had already been put out of service before the latest attack, having suffered a heavy bombardment three days earlier, in an assault that the UN chief, Ban Ki-moon, denounced as a war crime.
With M10 and the second-largest hospital in the eastern part of the city now both out of use, only six operational hospitals remain in the region, according to the Syrian American Medical Society (Sams).
“Two barrel bombs hit the M10 hospital and there were reports of a cluster bomb as well,” Adham Sahloul of Sams said.
The recent surge in attacks in Aleppo from forces loyal to the Syrian president, Bashar al-Assad, have been some of the worst in the country’s five-year civil war . More than 220 people have died and residential buildings have been reduced to heaps of rubble.
France condemned the bombing of M10, saying the shelling of healthcare structures and personnel in Aleppo constituted war crimes.
“Their perpetrators will be held to account,” foreign minister Jean-Marc Ayrault said in a statement. “France is mobilising at the Security Council as we speak to put a stop to this unacceptable tragedy,” he added.
The devastation continued as it emerged that the US secretary of state, John Kerry, complained to a group of Syrian civilians on the sidelines of New York’s United Nations general assembly last week that his diplomacy had not been backed by a serious threat of military force.
Russia appeared to respond to the reports, based on an audio recording of the meeting obtained by The New York Times, but with a warning. Russian foreign ministry spokeswoman Maria Zakharova said direct aggression by the US towards the Syrian government would lead to “frightening, tectonic shifts” in the Middle East. 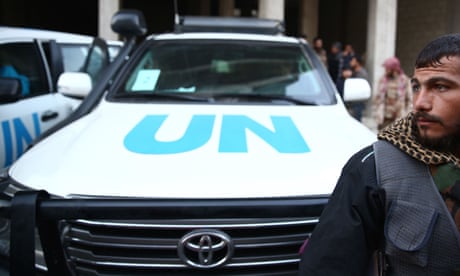 Read more
The Syrian Observatory for Human Rights, a British-based monitoring group, said airstrikes also hit a smaller field hospital in the Sakhur neighbourhood on Saturday. “One person was killed and the field hospital is out of service,” said the Observatory head, Rami Abdel Rahman.
Russian warplanes were also involved in the attacks on Saturday as the army shelled the besieged old quarter in a major offensive.
The airstrikes focused on major supply lines into rebel-held areas – the Castello Road and Malah district – while fighting raged in the Suleiman al-Halabi neighbourhood, the frontline to the north of Aleppo’s old city.
An army source quoted in state media said its forces had made advances, which was denied by rebels, who said they had repelled a new assault.
“They are shelling the old city heavily after another failed attempt to gain ground. They have lost several fighters and we are steadfast,” said Abu Hamam, a rebel from the Failaq al-Sham group.
The army said it would press its advantage after retaking the strategic Handarat camp north of Aleppo on Thursday. On Friday, civil defence sources said airstrikes on rebel-held residential areas killed at least 30 people with the use of incendiary and phosphorous bombs causing extensive damage and fires. 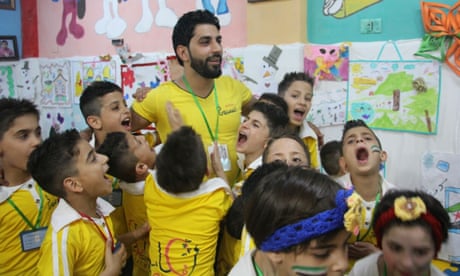 Stories from inside Aleppo: 'It feels like we are in prison'

Read more
The observatory said at least 20 were killed by sustained Russian and Syrian army strikes and artillery shelling on Friday and into the early hours of Saturday. State media added that rebel mortar attacks on government-held Midan and other areas in the city killed at least 20 people.
Medical charity Médecins Sans Frontières described the impact of Syrian and Russian bombardment of the east as a bloodbath.
More than 220 people have been killed in the east of the city since the government launched its offensive on 22 September. Residents of government-held neighbourhoods expressed relief that the rebels were being pushed back but said they feared retaliation. “We were happy when we heard about the army’s advance,” said Majed Abboud, a 32-year-old car dealer.
“But I’m afraid that with these ferocious clashes, there will be some kind of reaction from the armed groups,” he said. “They hit us with rockets and there were many casualties today [Friday] in Suleiman al-Halabi and al-Midan.”
Aleppo, Syria’s largest city and commercial hub before the civil war began in 2011, has been divided into government and opposition sectors for four years.
Posted by Tony at 8:20 AM