A medic inside the children’s hospital as it came under attack. Photograph: Mahmoud Al Fani/Independent Doctors Association
Link


The only children’s hospital in besieged Aleppo is out of action after being bombed as it treated victims of a chlorine gas attack, forcing staff to evacuate babies in incubators and other patients injured over days of fierce bombardment.
There are currently only four functioning hospitals left to serve around 250,000 civilians living in opposition-held areas, which have been under intense attack since the Syrian government and its Russian backers launched a new offensive on Tuesday.
There were so many airstrikes across Aleppo that the White Helmets teams which rescue survivors from rubble and put out fires said they were struggling to reach all the bomb sites. “[The city] is a mess,” said rescuer Ibrahim al-Haj.
The UK-based Syrian Observatory for Human Rights said 18 different neighbourhoods were hit dozens of times and at least four people had been killed. 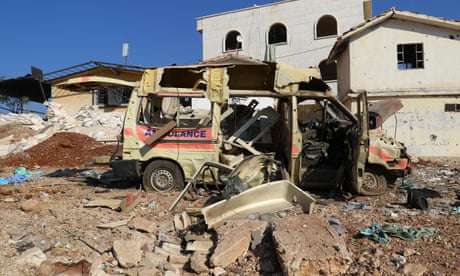 Read more
The latest assault on Aleppo is part of a wider attack on Syrian rebels launched from the ground, the air and the sea, with a Russian aircraft carrier firing missiles from off the Syrian coast. It hits Aleppo just as the siege starts to bite hard.
Medical and food supplies stockpiled in preparation are now dwindling after months without being restocked and, with winter closing in, the people trapped in Aleppo face “a very bleak moment”, a senior UN humanitarian official warned.
The children’s hospital, which was also hit on Thursday, was forced to evacuate as its doctors treated victims of the chlorine attack who were struggling to breathe.
“We are moving the children’s hospital because it has been hit twice this week and is considered a full-on target,” the Independent Doctors Association said. “We took the decision to evacuate it today, to relocate the staff and patients elsewhere.”
It is believed the bomb was a vacuum missile, fired by Syrian government forces, the IDA said. Footage shot by an al-Jazeera reporter who was covering the aftermath of the chlorine gas attack showed the hospital plunged into darkness.
Doctors and nurses used torches and mobile phones as they rushed to collect babies from their incubators, wrap them in blankets and take them to a basement office, where they were lined up together for a little extra warmth. One nurse broke down sobbing on a colleague’s shoulder.
Fourteen babies were later driven through the shelling to another location so their treatment could be restarted, one of the paediatricians confirmed. “As we drove out with the ambulance, warplanes were firing and artillery were shelling,” he said by text message. “But thank God we were not hurt.”
Bombing raids on the city have frequently targeted medical facilities, which have moved underground and sometimes shifted location in response.
The Russians and Damascus deny deliberately targeting civilian infrastructure, but attacks on hospitals, schools, markets and other non-military targets have been a regular feature of the war. The World Health Organization said it has already recorded 126 attacks on health facilities in 2016.
Syria’s largest city, and its cultural and economic hub before the war, Aleppo is now the last major urban stronghold of rebels fighting president Bashar al-Assad, and its fate is considered a bellwether for the future of the civil war.
The ferocity of bombing raids on the city is widely believed to be the start of a new push to retake it and may pave the way for ground attacks, although state troops have often struggled in close urban combat with rebel forces.
Instead Assad’s forces have relied on cutting off cities, bombing rebels to the negotiating table and starving civilians who support them into submission. Those who have clung on in opposition-held Aleppo through years of war now fear they face a similar fate.
“My understanding is that virtually all warehouses are now empty and tens of thousands of families are running out of food and all other supplies,” UN humanitarian adviser Jan Egeland told Reuters. “So this is a very bleak moment, and we are not talking about a tsunami here, we are talking about a manmade catastrophe from A to Z.”
The UN planned convoys with aid for 1 million Syrians in besieged or hard-to-reach areas this month, but so far not one convoy has reached its destination, Egeland said. A relief plan which would allow medical workers and supplies into east Aleppo and evacuation of the sick and wounded has not been endorsed by either side in the conflict.
International outrage at the indiscriminate bombing has been growing, but revulsion in the west did did little to temper the onslaught. Rebels fear theelection of Donald Trump as the next US president will further weaken their chances of relief.
The next US leader has made clear he wants to focus primarily on fighting against Isis, and is open to working with Assad and Russia, whose forces are currently pounding East Aleppo.
Assad said Trump would be a natural ally if he sought to combat terrorists, an epithet that the Syrian president uses to describe all of the opposition.
Charities working in Aleppo called on Americans to lobby their politicians to push harder for the siege to be lifted.
“We must all come together and place pressure on our governments to lift the siege on besieged areas ... and allow for food and medical supplies to enter immediately,” the head of the White Helmets and the Syrian American Medical Society, which supports hospitals in Aleppo, wrote in the Washington Post.
“We are asking you to mobilize, place pressure on your governments and demand that the people of Syria be granted the supplies they urgently need.”
Posted by Tony at 2:09 PM