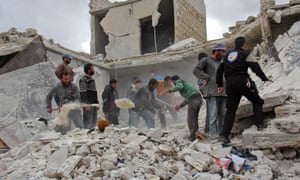 Jet fighters and helicopters bombing east Aleppo hit a children’s hospital and a blood bank on Wednesday, as medics and patients sheltered in the basement waiting for the hours-long assault to end.
An ambulance driver and at least two children were among at least 20 civilians reportedly killed after a night of fierce attacks on rebel-held sections of Syria’s largest city. Another 47 people were reportedly injured.
The bombardment, which continued into Wednesday, is widely believed to mark the start of a push by Bashar al-Assad, Syria’s president, and his backers, including Russia and Iran, to crush the opposition in their last urban stronghold. 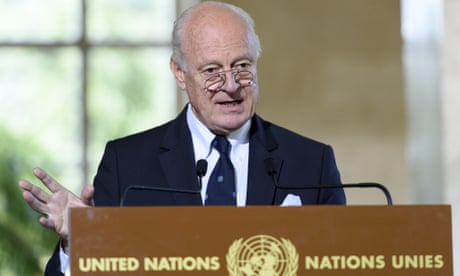 Read more
“A horrible day for the children’s hospital. Me and my staff and all the patients are sitting in one room in the basement right now, trying to protect our patients,” the centre’s director, Dr Hatem, said in a message posted on Facebook. “We are trying to leave the basement but we can’t because of all the aircraft still in the sky. Pray for us please.” They were still trapped underground early in the afternoon.
The children’s hospital, which carries out about 4,000 consultations a month, was one of six medical centres bombed in Syria over the past 48 hours, according to a charity that supports them. It was not the first time it was attacked.
“Like all the surrounding hospitals in eastern Aleppo it has been hit multiple times this year alone, putting 2016 on track to becoming the worst year of hospital attacks on record,” the Independent Doctors Association said.
The blood bank was only a few hundred metres away and narrowly escaped anairstrike a few weeks earlier. It is the only big blood supply centre left in Aleppo. A car used to transport supplies was destroyed.
The targeting of civilians and medics in Aleppo in particular has fuelled international outrage and growing pressure on Damascus to halt the bombing.
But opposition forces are now bracing for an intensified campaign on the city, against the backdrop of a geopolitical landscape dramatically changed by the election of Donald Trump as the next US president.
On Tuesday Assad described Trump as a potential “natural ally” if the president-elect fulfilled a campaign promise to fight terrorism.
Doctors said many people were under the rubble after a bombardment that included barrel bombs – cylinders packed with explosives dropped often inaccurately from helicopters and usually targeting civilian areas.
“Horror is back to Aleppo,” said Abdulkafi al-Hamdo, a teacher in the city, in a text message. Audio recording from inside the city captured the sounds of intense bombardment and shelling.
Ibrahim Abu al-Laith, a civil defence official, told Reuters there were more than 40 airstrikes on the Shaar area of the city alone, where the hospital and blood bank were located. “Today the bombardment is very, very fierce,” he said.

Russia has denied involvement in the air raids so far on the city, but said it had launched strikes on the provinces of Idlib and Homs on Tuesday from its aircraft carrier the Admiral Kuznetsov, stationed off the Syrian coast.
The aircraft carrier’s arrival in a highly publicised trip from Russia’s ports to the Mediterranean was widely seen as a sign that Moscow was ready to double down on the campaign to reclaim Aleppo for the government.
Whole districts of a city that was once Syria’s most vibrant have been virtually abandoned over years of intense street fighting. Many parts of the east have been bombed to rubble and are being starved by a slowly tightening siege.
A semblance of normal life continues in west Aleppo, and regaining full control of the city would be a huge boost for forces loyal to Assad, for its symbolic value and because it is the only key urban area still controlled by the opposition.

Assad’s forces, backed by Iranian and other Shia militias and Russian air power, have used a policy of bombing the opposition to the negotiating table while starving the communities that support them into surrender in several Syrian cities. They appear to be deploying the same tactics in Aleppo. 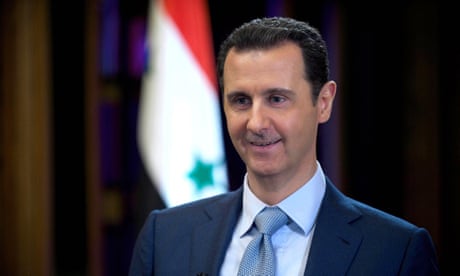 Assad: Trump would be a 'natural ally' if he follows through on fighting terrorism

Read more
The situation in Aleppo has long been seen as a bellwether for the broader civil war in Syria, and the current onslaught is within the context of surging momentum for the Assad regime after Moscow’s intervention in the war last year.
The opposition fears that the Trump administration will abandon America’s covert but limited support for the rebellion, allowing the Kremlin a free hand to crush it. Trump said during the election campaign that he intended to focus on destroying Islamic State.
In his first reaction to Trump’s election victory, Assad struck a cautiously upbeat note, saying the president-elect would be a natural ally if he sought to combat terrorists, an epithet that the Syrian president uses to describe all of the opposition.
“We cannot tell anything about what he’s going to do, but if … he is going to fight the terrorists, of course we are going to be ally, natural ally, in that regard with the Russian, with the Iranian, with many other countries,” he told Portugal’s RTP state television, speaking in English.
“I would say this is promising, but can he deliver?” Assad added.