Ex-intelligence chiefs: Trump is being played by Putin and US is in 'peril' 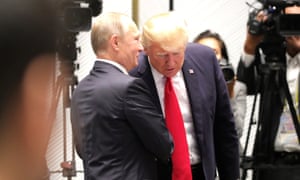 
Two former US intelligence chiefs have said Donald Trump poses “a peril” to the US because he is vulnerable to being “played” by Russia, after the president said on Saturday he believed Vladimir Putin’s denials of Russian interference in the 2016 election. 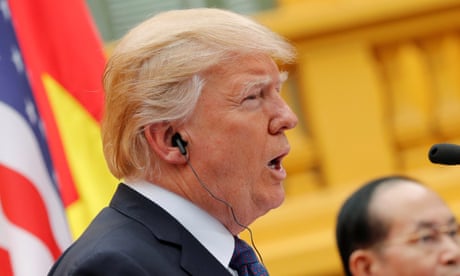 Read more
The former director of national intelligence James Clapper and the former CIA director John Brennan issued a stern rebuke to Trump after the president branded both men “political hacks” for their support of an intelligence agency consensus that Russia meddled with the US election.
“First of all, he was referring to us as political hacks because he was trying to delegitimize the intelligence assessment that was done,” Brennan told CNN’s State of the Union.
He later added: “By not confronting the issue directly and not acknowledging to Putin: ‘We know that you’re responsible for this,’ I think he’s giving Putin a pass.
“And I think it demonstrates to Mr Putin that Donald Trump can be played by foreign leaders who are going to be appeal to his ego and try to play upon his insecurities, which is very, very worrisome from a national security standpoint.”
Special counsel Robert Mueller, a former FBI director, recently issued the first indictments in the investigation into possible collusion between Trump aides and Russia. Trump has repeatedly denied collusion.
On Saturday, he told reporters on Air Force One during a flight to Hanoi Mueller was leading an “artificial Democratic hit job” which could cost “millions and millions of lives” by interfering with diplomatic efforts with Russia.
Asked if he had raised the issue of Russian interference during conversations with Putin at a political summit in Da Nang, Trump said: “Every time he sees me, he says, ‘I didn’t do that.’ And I believe – I really believe that when he tells me that, he means it.”
The president later tweeted criticism of “haters and fools” and insisted that “having a good relationship with Russia is a good thing, not a bad thing” because he wanted “to solve North Korea, Syria, Ukraine, terrorism, and Russia can greatly help!”
Nonetheless he then appeared to contradict his own remarks during a press conference in Hanoi on Sunday, saying he was “with our agencies” on the issue of Russian meddling.
Clapper seized upon Trump’s initial comments. The former director of national intelligence also told CNN such backtracking was indicative of weakness in front of the leaders of rival powers.
“I think he [Trump] seems very susceptible to rolling out the red carpet, honour guards and all the trappings and pomp and circumstance that come with the office,” Clapper said. “I think that appeals to him and it plays to his insecurities. Yes, I do think that both the Chinese and the Russians can play him.” 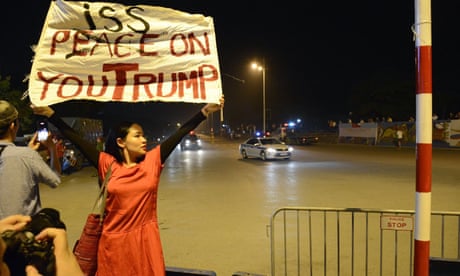 Read more
Trump criticised Clapper and Brennan, who served under both Democratic and Republican presidents, as well as James Comey, the FBI director he fired in May over, he said, “this Russia thing”, during the same flight to Hanoi on Saturday.
Brennan said the remarks were “reprehensible” but added: “Considering the source of the criticism, I consider that criticism a badge of honour.
“To impugn the character of somebody like Jim Clapper on Veteran’s Day, who has dedicated so much of his life to this country, I just find that outrageous. I think it’s something Mr Trump should be ashamed of, but it doesn’t seem that anything that he does he feels any shame of whatsoever.”
Trump’s treasury secretary branded the former intelligence chiefs’ remarks “ridiculous statements”.
“President Trump is not getting played by anybody,” Steven Mnuchin told CNN. “President Trump was focused on some very important issues in North Korea and Syria and those are areas in which we need to work with Russia and get them onboard with our strategy.”
Posted by Tony at 9:36 AM