Oman fears 'stupid' policies on Qatar, Yemen and across region, backed by Trump, pushing it and other Gulf states into alternative alliances


Oman and other Gulf states could seek alternative alliances if Saudi Arabia, the United Arab Emirates and US President Donald Trump continue to pursue “stupid” policies that are destabilising the region, a senior Omani official has told Middle East Eye.
The official, speaking on condition of anonymity, said that Muscat could be forced to seek alternative protection if the Saudi-Emirati axis pursued plans to break away from the Gulf Cooperation Council, and expressed concerns about the continuing blockade of Qatar which has plunged the GCC into crisis.

What do you think will happen if the Saudis and the Emiratis go it alone? The other [Gulf] states will look elsewhere for protection
- Oman source

Riyadh and Abu Dhabi earlier this month announced plans for a separate political and military alliance and withdrew their officials from a GCC summit meeting in Kuwait. Bahrain has also sided with the Saudis and the Emiratis.
“What do you think will happen if the Saudis and the Emiratis go it alone? The other states will look elsewhere for protection,” the official said, referring to Oman, Qatar and Kuwait, the GCC states outside the Saudi-led bloc.
When asked to clarify which countries he meant, he said the options could include Iran, Saudi Arabia's regional rival with whom Oman maintains diplomatic ties, and India, which has a strong trade relationship with the Gulf states.

The official also said that the UK, which has plans to build a permanent naval base at Duqm on Oman's Indian Ocean coast, had pledged to protect its ally from any regional dispute.
But he warned that British influence in the region risked being eclipsed by China and other Asian states because of London's short-sighted focus on arms sales and energy deals.
Oman is generally known for quiet diplomacy and for staying on terms with all sides in the brutal politics of the Gulf. However, behind closed doors, the sultanate is less than happy with the way that Saudi Crown Prince Mohammed bin Salman (MbS) in particular is dividing the GCC and waging battles on multiple fronts.
MEE's source made it clear that the country sees the policies being pursued by MbS and backed by Trump as reckless, destabilising and, in a word, “stupid”. This is the same word used by UN Secretary-General Antonio Gutierrez last week to describe the Saudi-led war in Yemen.

According to the source, if Saudi and Emiratis go ahead with their own cooperation pact, the Gulf will experience a kind of super Brexit – or, as he put it, a “break-it”.
The Omanis have long had a semi-detached view of GCC plans for greater unification under Saudi leadership, and have never been enthusiastic about proposed currency unions or security pacts that would tie them too closely to Riyadh. 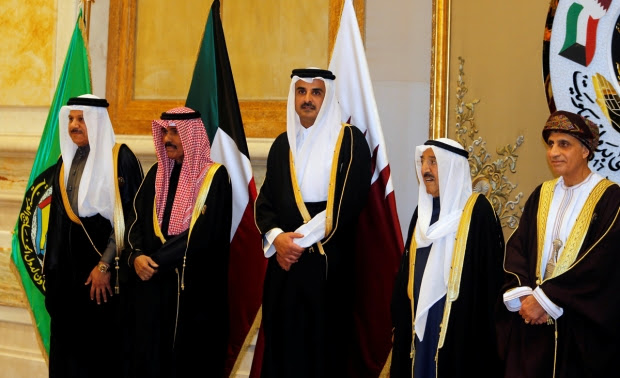 Qatar's emir, Tamim bin Hamad Al Thani (centre), stands next to Kuwait's emir, Sheikh Sabah al Sabah, and Oman's deputy prime minister at December's GCC summit (Reuters)
“We always knew the GCC plans for integration were not achievable because we know our neighbours and how unpredictable they are,” said the source, referring to the Saudis and the UAE.
Oman believes it can survive outside the GCC if it has to, as it has always maintained multiple alliances, including with the West, India, and its burgeoning relationship with Iran.

Oman is not officially taking sides in the Qatar dispute and the official said the country is continuing to offer advice to both parties. Mediation is being led by Kuwait.
Oman’s view is that the stated reasons given for the blockade of Qatar – that Doha has supported “extremist groups” and has moved closer to Iran – are not the real ones.
“What is the difference between Saudi and Qatar? Who supported extremists in Syria and Iraq?” the source asked. Both had, he suggested.
The dispute was not about Qatar's support for Islamists or Iran, he added, but rather about power and Saudi plans to dominate the peninsula and to make it another Bahrain.
The official also questioned whether the US and UK were really guaranteeing the security of Qatar. He asked what assurances they had given the Qataris, pointing to Trump’s support for MbS in the dispute and the UK’s lack of intervention to solve the crisis.
The UK has just agreed to sell 24 Eurofighter Tycoon jets to Qatar in an $8bn deal so there is no sense that the lucrative security ties and arms contracts with Doha will cease.

But the official warned that the UK’s narrow focus on weapons sales and energy in its relationship with the Gulf states was a major weakness and would ultimately see it eclipsed by China and other Asian states.

The UK is no longer Oman’s top trade partner, despite two centuries of colonial power and influence over the al-Busaidi monarchy

The UK is no longer Oman’s top trade partner, despite two centuries of colonial power and influence over the al-Busaidi monarchy. The country’s leading investors are the United States, the UAE, Japan and China, according to figures published by Spanish bank Santander.
The UK should switch from its reliance on selling arms and its historic control of the oil and gas sectors to trading in goods and services if it wishes to retain some of its waning influence, he advised.
The Omanis also believe Washington and London could do much more than they have been to settle the Qatar dispute. In this the Omani view is close to that of frustrated diplomats in the US State Department, according to the official.
He said that State Department officials had told Omani counterparts that they agreed with them that the dispute should be resolved and had argued that the US should be pressing this point to MbS, but the White House under Trump is backing the Saudis and this advice is being ignored.

While Oman risks Saudi censure itself because of its close relations with Iran, officials say Muscat does not itself feel threatened by its northern neighbour since it has more than one partner it can turn to for security.
“Oman is open to the Indian Ocean and cannot be blockaded like Qatar,” said another Omani official.

Also, Riyadh and Abu Dhabi ultimately will need Gulf allies like Oman to settle the various regional disputes, the first source said.
“Saudi and the Emirates need us if they ever want to solve the Yemen or Qatar crisis, or with Iran, because we talk to everyone.”
Oman has also received recent assurances at the ministerial level that London will protect its ally from any regional dispute, MEE understands. 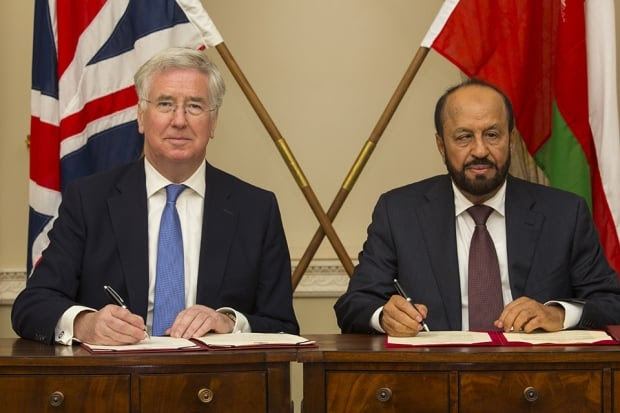 Then UK defence secretary Michael Fallon and Omani defence minister Sayyid Badr bin Saud bin Harub Al Busaidi in May 2016 (UK Ministry of Defence)
Although the UK Foreign Office did not confirm that such an explicit assurance was given, it said in a statement to MEE: “The UK has a broad and long-standing relationship with Oman, including a strong historic and current security and defence relationship. We are committed to helping Oman protect its security, sovereignty and territorial integrity, and this is reflected through our significant defence cooperation.
“We have a well-established and significant, long-standing loan service working within all three Omani services. We are also heavily investing in the port of Duqm for use as a joint logistics hub and by the Royal Navy. Next year, Exercise Saif Sareea 3 will take place in Oman – the largest UK-Omani exercise for 15 years.”

Oman was a key interlocutor in the Iran nuclear deal with world powers that Trump has refused to recertify. He has thrown it to Congress to decide whether to cancel the deal.
But the official said Trump is conflating several issues – Iran's nuclear ambitions, its ballistic missile programmes and its regional interventions.
By doing so, Trump has increased the risk of a regional conflict, the official said, in which Iran appears to have been cast in the role of the next North Korea, firing missiles across the Gulf.
Oman could play a role, with the blessing of the UK government and those in the US government who want a return to stability in the Gulf, in winding down the disputes that currently threaten a bigger conflagration, the official said.

One immediate concern in Muscat is the ever-worsening catastrophe across the border in war-stricken Yemen.
Oman was close to both former Yemeni president Ali Abdullah Saleh and the Houthi rebels who killed him earlier this month following the collapse of their tenuous alliance against the Saudi-led coalition. 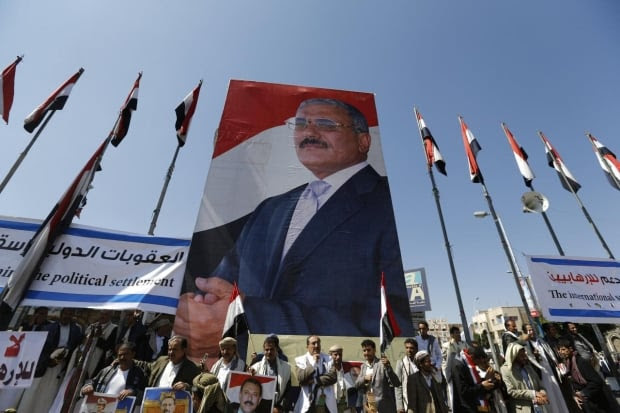 Supporters of Yemen's former president Ali Abdullah Saleh take part in a rally in Yemen's capital, Sanaa, in September 2014 (Reuters)
Saleh overestimated his influence and fatally miscalculated by trying to become a “Trojan horse” for the Saudis in Sanaa, said the source.
Muscat is ready to play a role in ending the war, the official said, and is frustrated that the US and the UK have not used more of their influence to rein in Mohammed bin Salman.
But right now, he said, the Saudis and their Emirati allies are not interested in talking.
Posted by Tony at 8:14 AM