Top 10 reasons to celebrate the UN vote on Jerusalem 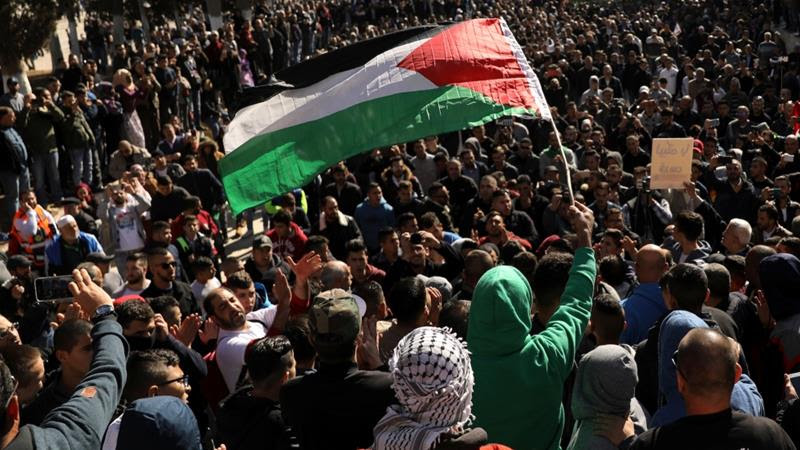 
A resounding majority of UN member states has denounced the US' arrogant decision to unilaterally declare Jerusalem "the capital" of the Israeli apartheid settler colony.
The United Nations General Assembly voted 128 to 9, with 35 abstentions, for a resolution declaring the US move on Jerusalem "null and void". Thursday's vote came after the US vetoed the same measure in the Security Council on Monday - The US was outnumbered 14 to 1 in that vote.
Israel and Zionist propaganda organs around the world were quick to call this moral victory for Palestinians nothing but a "nonbinding resolution". Yes, the General Assembly vote is "nonbinding"- but is it also useless and pointless? Quite to the contrary.
Here are the top 10 reasons to celebrate the UN vote:One. This vote is a resounding global declaration that Israel is a rogue state, has no moral or political standing among the global community - that it is a European settler colony shoved down the throat of the world community of nations and decades after its initial fabrication, and billions of dollars wasted on propaganda, it has failed to secure any standing for itself whatsoever.Two. The vote is an equally compelling indication that the US, particularly under the Trump administration, is a bully-state and a toothless tiger that roars much louder than it can bite. With this vote the world community defied unprecedented threats by the US to "take names" and punish countries and declared independence from the rabid Zionism infecting the US politics. Nikki Haley, the Trump envoy, went on a rampage threatening the world community and the world shut her up with the stroke of one laser sharp slap.

Three. A total of 128 countries declared "null and void" the imperial decree of the US that Jerusalem is the capital of its favourite military base, with only 9 countries, all small and weak states, succumbing to US threats and 35 countries abstaining. That means the entirety of the world community minus 9 financially and politically vulnerable states have no reason whatsoever to be intimidated by US/Israel - that these twin pariah states are exposed for their moral bankruptcy and political ineptitude, that they are nothing except existential military threats to the world at large.  Four. It exposed the diplomatic incompetence of Nikki Haley and her Israeli counterpart to frighten and intimidate like two bulldogs barking at the world community, that they will punish any country that goes against their blunt and shameless imperialism. That like all his other appointees, Trump's UN envoy is a definition of militant ineptitude, zero diplomatic skills and non-existent political clout. That she is an embarrassment to every single decent American citizen.  Five. The vote exposed that the Palestinian cause is a towering global concern not limited to Arab and Muslim countries - that the baseless and pernicious charge of "anti-Semitism" the shameless Zionists hurl at anyone who criticises Israel no longer prevents the world from loudly declaring its opposition to the systematic theft of Palestine. Is the whole world "anti-Semite" - except for US/Israel and a few small islands in the pacific?  Six. That Trump's son-in-law Jared Kushner and with him the entire cabal of fanatical Zionists financing the Israeli settler colony have created the defining moment of the moral depravity of those who support Israel, that every US citizen and every Israeli settler colonialist must look themselves at the mirror and see if they can stay there for a few decent seconds.
Seven. Along with the initial Trumpian declaration that had sought to normalise the Zionist theft of Jerusalem this UN defiance forever denies the US any pretence to be a fair and just arbiter of peace and exposes it, Republican and Democratic alike, to be the imperial backer of the Israeli thievery of Palestine.Eight. The miserable failure of Nikki Haley at the UN - both at the Security Council and the General Assembly vote - puts an end to the Oslo peace charade and with it the "two-state" delusion. From now on anyone who utters the words "two-state solution" is a traitor to the cause of Palestinian national liberation movement, partaking in and promoting the wicked Israeli charlatanism to cover their continued theft of Palestine with no intention whatsoever ever to allow the formation of an independent Palestinian state.  Nine. By declaring the UN a "house of lies" for this vote, the Israeli strongman Benjamin Netanyahu has dismissed the whole world as delusional - a clear  evidence of psychological projection. That as the prime minister of a settler colony he and the sentiments he represents live in an alternate universe - that "Israel" is fake news and an alternative fiction, that either the whole world is a "house of lies" or else Benjamin Netanyahu is the prime minister of a "House of Cards."  Ten. The deserving and just humiliation of Trump administration at the UN also puts it blatantly at odds with the rising tide of pro-Palestinian consciousness in the US itself. This administration, more than any other before it, shows the pernicious power of the Israeli Lobby in the US to force its political elite to go against the will of American people and embarrass them in front of the world community. It is only matter of time when Americans too will liberate themselves from this slavish bondage to the Fifth Column of a foreign settler colony.
Posted by Tony at 7:12 AM