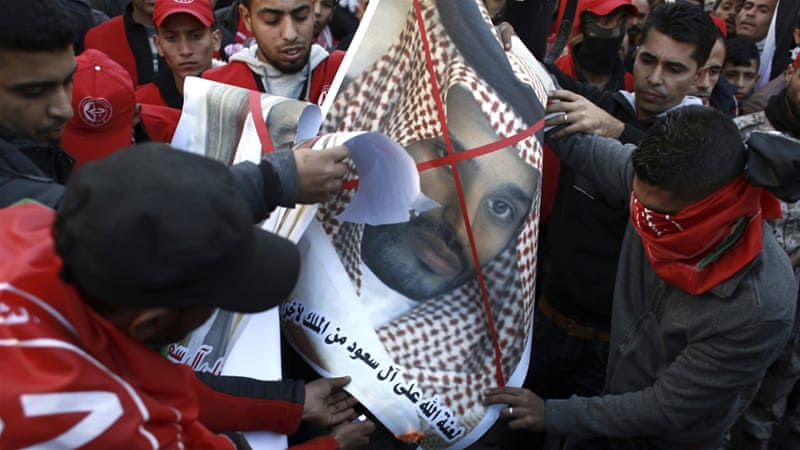 Palestinian Popular Front for the Liberation of Palestine supporters burn photos of Saudi King Salman and Saudi Deputy Crown Prince Mohammed bin Salman on December 9 [AP/Khalil Hamra]
Palestinians have been carefully watching Saudi Arabia drawing closer to Israel.
The past few months have seen not only a flood of Saudi statements on social media supporting normalisation with Israel (some saying that Saudi is "more important" than Palestine and others apparently dreaming of Israel becoming Saudi's top vacationing spot), but also a flurry of diplomatic activity between Riyadh and Tel Aviv.
Saudi and Israeli political leadership agree on a number of issues, the most important of which is the need to curb Iran's growing influence and to keep the US engaged in the Middle East. Pursuing these common interests, the Saudis and the Israelis have intensified their efforts for a formal normalisation of relations.
In June 2017, Anwar Eshki, former Saudi general and current head of the Middle East Center for Strategic and Legal Studies, said that Saudi Arabia would accept normalisation with Israel if it, in turn, accepted the Arab peace initiative. He also said that if Saudi Arabia did so, the rest of the Islamic world would follow suit.
In October, former head of Saudi intelligence Prince Turki al-Faisal took part in a forum in New York with the former head of Mossad, Efraim Halevy.
In November, Israeli Chief of Staff General Gadi Eizenkot had an interview with Saudi website Elaph. The same month, the Israeli minister of communications, Ayoub Kara, invited Saudi Mufti Abdulaziz Al Sheikh to visit Tel Aviv.

The Saudi plan will eventually crumble, as will Saudi Arabia's reputation in the Middle East and beyond.

In early December, the New York Times published details of an alleged Saudi proposal for a Palestinian state on parts of the West Bank and the Jerusalem village of Abu Dees as its capital. Just a few days later, US President Donald Trump declared officially that the US is recognising Jerusalem as the capital of the Israeli state. At the time of the declaration, a delegation from a Washington pro-Israeli think-tank was in Riyadh meeting with Saudi Crown Prince Mohammed bin Salman, who demonstrated that he didn't "want to talk about Jerusalem".
And while Riyadh and Tel Aviv have been engaged in public and secret overtures, they have also been pushing the Palestinian political leadership into a corner.
In November, Palestinian President Mahmoud Abbas made a sudden visit to Riyadh and returned visibly perturbed. Rumours in Ramallah had it that the Saudis had pressed him to accept their plan for Palestine, and that this was likely tied to an agreement between US presidential envoys Jared Kushner and Jason Greenblatt and the Saudi crown prince, reached during their unannounced meeting at the end of October.
Then, in December, after Trump's announcement on Jerusalem, Mohamed Ashtieh, member of the Fatah Central Committee, said that unnamed Arab countries had refused to hold an Arab summit about Jerusalem. It was also rumoured that Saudi Arabia and Egypt were pressuring Abbas not to attend the Organisation for Islamic Cooperation summit in Turkey.
Abbas resisted this pressure and attended the summit and followed it with a visit to Qatar, which Saudi Arabia is currently imposing a blockade on.
By now, Palestinians have no illusions about what Saudi Arabia is pushing for. It is clear to all of us that Riyadh is not working for a just peace solution and an end to Israeli occupation of Palestinian land.
Unsurprisingly, Palestinian social media has exploded in anger at Saudi actions; Twitter, for example, has seen a popular hashtag "Normalisation is betrayal" emerge. Some have called for burning pictures of the Saudi king; others have said Saudis calling for normalisation are "Zionists in Arab clothes".
The anger also spread beyond social media, with portraits of Saudi King Salman and Crown Prince Mohammed bin Salman being torn at a Popular Front for the Liberation of Palestine rally, amid chants like "King Salman sold Jerusalem!"
The image of Saudi Arabia and its allies has suffered immensely within Palestine. A survey conducted by the Palestinian Center for Policy and Survey Research in Gaza and the West Bank showed that 82 percent of Palestinians do not trust the Saudis would defend their rights, and 75 percent and 70 percent do not trust, respectively, the UAE and Egypt - both major Saudi allies.
What the Saudis are not factoring in, in their foreign policy calculations, is that Palestinians will resist any attempt for an unjust settlement. There is enough mistrust towards Riyadh already and whatever peace initiative comes out of its negotiations with the US and Israel will be outright rejected.
Even if the Palestinian leadership is pressed into concessions, people on the ground will continue their resistance. The Saudi plan will eventually crumble, as will Saudi Arabia's reputation in the Middle East and beyond.
The region has already been through two intifadas and an Arab Spring. Arab youth have proven that they can face off with local regimes and superpowers. They will not accept more injustice, and heavy-handed repression would only inflame their anger.
An unjust settlement will not bring peace.
Posted by Tony at 7:06 AM