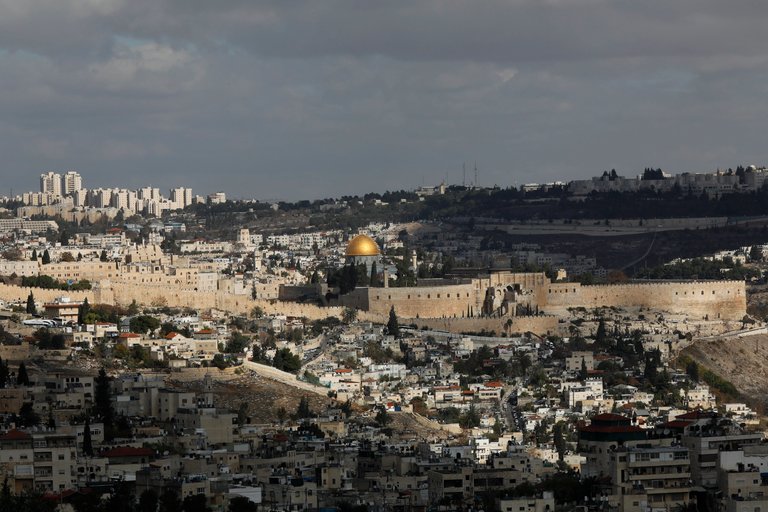 As President Trump moved last month to recognize Jerusalem as the capital of Israel, an Egyptian intelligence officer quietly placed phone calls to the hosts of several influential talk shows in Egypt.
“Like all our Arab brothers,” Egypt would denounce the decision in public, the officer, Capt. Ashraf al-Kholi, told the hosts.
But strife with Israel was not in Egypt’s national interest, Captain Kholi said. He told the hosts that instead of condemning the decision, they should persuade their viewers to accept it. Palestinians, he suggested, should content themselves with the dreary West Bank town that currently houses the Palestinian Authority, Ramallah.
“How is Jerusalem different from Ramallah, really?” Captain Kholi asked repeatedly in four audio recordings of his telephone calls obtained by The New York Times.
“Exactly that,” agreed one host, Azmi Megahed, who confirmed the authenticity of the recording.
For decades, powerful Arab states like Egypt and Saudi Arabia have publicly criticized Israel’s treatment of the Palestinians, while privately acquiescing to Israel’s continued occupation of territory the Palestinians claim as their homeland.
Continue reading the main story

But now a de facto alliance against shared foes such as Iran, the Muslim Brotherhood, Islamic State militants and the Arab Spring uprisings is drawing the Arab leaders into an ever-closer collaboration with their one-time nemesis, Israel — producing especially stark juxtapositions between their posturing in public and private.
Mr. Trump’s decision broke with a central premise of 50 years of American-sponsored peace talks, defied decades of Arab demands that East Jerusalem be the capital of a Palestinian state, and stoked fears of a violent backlash across the Middle East.
Arab governments, mindful of the popular sympathy for the Palestinian cause, rushed to publicly condemn it.
Egyptian state media reported that President Abdel Fattah el-Sisi had personally protested to Mr. Trump. Egyptian religious leaders close to the government refused to meet with Vice President Mike Pence, and Egypt submitted a United Nations Security Council resolution demanding a reversal of Mr. Trump’s decision. (The United States vetoed the resolution, although the General Assembly adopted a similar one, over American objections, days later.)
King Salman of Saudi Arabia, arguably the most influential Arab state, also publicly denounced Mr. Trump’s decision.
At the same time, though, the kingdom had already quietly signaled its acquiescence or even tacit approval of the Israeli claim to Jerusalem. Days before Mr. Trump’s announcement, the Saudi crown prince, Mohamed bin Salman, privately urged the Palestinian president, Mahmoud Abbas, to accept a radically curtailed vision of statehood without a capital in East Jerusalem, according to Palestinian, Arab and European officials who have heard Mr. Abbas’s version of events.

Saudi Arabia publicly disputed those reports.
The hosts Captain Kholi called all heeded his advice, and most other voices in the state-owned and pro-government news media across the Arab world were also strikingly muted, even unemotional, about the status of Jerusalem. Such a response would have been all but unthinkable even a decade ago, much less during the period between 1948 and 1973, when Egypt and its Arab allies fought three wars against Israel.
Shibley Telhami, a scholar of the region at the University of Maryland and the Brookings Institution, called the Arab states’ acceptance of the decision “transformational.”
“I don’t think it would have happened a decade ago, because Arab leaders would have made clear they wouldn’t live with it,” he said. Instead, he said, preoccupied by concerns about their own stability, the Arab leaders signaled that — while they may not like the decision — they “will find a way to work with it,” and “with a White House that is prepared to break with what had been taboos in American foreign policy.”
Two spokesmen for the Egyptian government did not respond to requests for comment for this article. Captain Kholi could not be reached.
Television talk shows play a formative role in shaping public debate in Egypt, and Egyptian intelligence services often brief the presenters of the programs about messages to convey to the public. The hosts typically prefer to characterize the conversations as journalists talking to sources.
In addition to the call with Mr. Megahed, three other audio recordings of strikingly similar telephone conversations with the same intelligence agent, Captain Kholi, were all provided to The Times by an intermediary supportive of the Palestinian cause and opposed to President Sisi. The origin of the recordings could not be determined.
Mr. Megahed, in an interview, said that he had agreed with Captain Kholi based on his personal assessment of the need to avoid a fresh outbreak of violence, not on the orders of the intelligence service.

Understand the world with sharp insight and commentary on the major news stories of the week.
“I am friends with Ashraf and we talk all the time,” Mr. Megahed said. “Another intifada would be bad. I have no problem saying all of the things you have heard in that call in public.”
As for those who disagreed, he said, “We should have buses pick up all the people who say they want to go fight for Jerusalem and actually drive them to Jerusalem. Go fight if you are so tough. People are sick of the slogans and all that. I only care about the interests of my country.”
Two of the calls were with other well-known Egyptian talk show hosts. One of them, Mofid Fawzy, quickly denied taking part in any such conversation and immediately hung up the phone.
The other host, Saeed Hassaseen, who is also a member of Parliament, stopped returning phone messages and backed out of plans for an interview after a journalist contacted Mr. Megahed and Mr. Fawzy about the calls.

The fourth call was with an Egyptian singer and actress known as Yousra, who could not be reached for comment.
The recordings all appear to match public recordings of their voices, and Captain Kholi’s talking points in each of the calls follow the same lines as his conversation with Mr. Megahed.
“I was just calling to tell you what our public stance is, so if you go on TV or speak in an interview, I am telling you what is the stance of Egypt’s national security apparatus and what it stands to benefit from in this matter of announcing Jerusalem to be the capital of Israel, O.K.?” Captain Kholi began one conversation, with Mr. Hassaseen.
“Give me orders, sir,” Mr. Hassaseen replied, according to the recording. “I am at your command.”
“We, like all our Arab brothers, are denouncing this matter,” Captain Kholi continued. But, he added, “After that, this thing will become a reality. Palestinians can’t resist and we don’t want to go to war. We have enough on our plate as you know.”
The Egyptian military has struggled for more than four years to try to defeat a simmering militant Islamist insurgence centered in the North Sinai, and Egyptian officials have sometimes accused Hamas, the militant Palestinian group that controls the adjacent Gaza Strip, of abetting violence against the government of Egypt.
“The point that is dangerous for us is the intifada issue,” Captain Kholi explained. “An intifada would not serve Egypt’s national security interests because an intifada would revive the Islamists and Hamas. Hamas would be reborn once more.”
“At the end of the day, later on, Jerusalem won’t be much different from Ramallah. What matters is ending the suffering of the Palestinian people,” Captain Kholi concluded. “Concessions are a must and if we reach a concession whereby Jerusalem will be — Ramallah will be the capital of Palestine, to end the war and so no one else dies, then we would go for it.”
All three recipients of his calls pledged to convey his messages, and some echoed his arguments in broadcasts. “Enough already. It got old,” Mr. Megahed told his viewers about the issue of Jerusalem.
In his conversation with Mr. Megahed, however, Captain Kholi added an extra flourish. He charged that Egypt’s regional foe Qatar and its ruler, Emir Tamim bin Hamad al Thani, were the ones guilty of collaborating with Israel.
“You also will say that Tamim and Qatar have secret ties to Israel. You know all that,” Captain Kholi told the talk show host.
“Obvious ties,” Mr. Megahed replied. “My pleasure. My pleasure. I will include it in the next episode, God willing.”
Posted by Tony at 12:51 PM