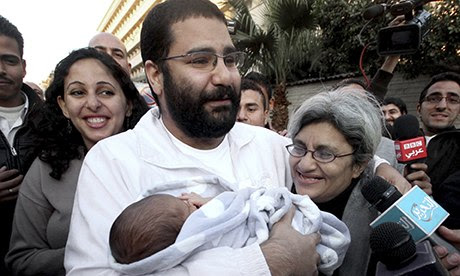 Alaa Abd El Fattah, pictured in 2011 with his mother and baby son, was taken and beaten in a violent raid, his wife said. Photograph: Amr Hafez/AP
"A week in Egypt that campaigners said confirmed a return to Mubarak-era repression ended with the arrest of high-profile activist Alaa Abd El Fattah in a violent raid in which his wife said she was also assaulted.
Abd El Fattah has been targeted by every government since Hosni Mubarak's, and his incarceration has come to be seen as a bellwether for human rights in Egypt.
His arrest followed the sentencing of 14 women and girls to 11 years in jail for taking part in an early-morning pro-Mohamed Morsi protest in October, and the enactment of a draconian new protest law that rights groups say severely curtails the right to protest, and which has beencalled "seriously flawed" by the UN.
It also followed Thursday's on-campus shooting by police of a student protesting against the government at Cairo University, and the 15-day detention of a schoolboy for carrying a ruler bearing a pro-Morsi symbol,according to state-owned media.
The arrest of Abd El Fattah, a secular activist also targeted by the administration of ex-president Morsi, confirmed fears that Egypt's new government has widened its crackdown on pro-Morsi dissent to the non-Islamist activists who joined calls for Morsi's overthrow earlier this year. Until the past fortnight, when non-Islamist activists finally returned to Cairo's streets in significant numbers, the crackdown had largely centred on Morsi supporters and striking workers outside of the capital.
Abd El Fattah was arrested on suspicion of encouraging a demonstration on Tuesday outside the Egyptian parliament that condemned how Egypt's new constitution is set to allow the army to try civilians in military courts. Under the new protest law, the protesters should have sought permission from the police – so police arrested 79 of them within minutes. Twenty-four remain in custody, while 22 female protesters said they were beaten and harassed – before being abandoned in the desert several miles south of Cairo.
Following the issue of a warrant for his arrest, Abd El Fattah announced publicly that he intended to turn himself in on Saturday. In a statement translated by his aunt, the novelist Ahdaf Soueif, Abd El Fattah also argued that his arrest was political, and said "the legitimacy of the current regime collapsed" just five days after Morsi's overthrow, when soldiers and police killed 51 pro-Morsi supporters at a protest.
Abd El Fattah also noted that he had been at a police station for eight hours on Tuesday night to lobby for other arrested activists, and concluded that the police had not detained him at the time because they wanted to make a spectacle of his arrest. That warning came to pass on Thursday night – when, his wife Manal said, several armed policeman stormed their home shortly after 10am, beating them both and taking their phones and laptops.
An arrest warrant was also issued for Ahmed Maher, the founder of the 6 April youth movement that spearheaded Mubarak's ousting. On Friday, he could not be reached by phone and his whereabouts were unknown. Earlier in the week, Maher had told the Guardian he was considering going into hiding, and compared Egypt's current climate of repression to the height of a campaign against him in 2008 "when I was hiding and trying to escape the police, and trying to make my wife and family safe".
While Egypt's police were a major target of the 2011 uprising, and their brutality continued unabated under Morsi, they returned to public favour after supporting Morsi's overthrow in July. It was a development that may explain why the security establishment felt free to harden their stance against all forms of dissent this week.
"The security sector feels it has the backing of large swaths of the public, who are exhausted by three years of upheaval, and who are now prepared to trade freedoms for stability," said HA Hellyer, an Egypt analyst for the Royal United Services Institute, a foreign affairs thinktank. "But I'm not so sure this kind of policy will be sustainable in the long term. The wider public expects the state to deliver on the economy and living standards, which the state is unlikely to be able to do – and if it feels the security sector is given a free hand without any observable benefits, the wider public could just as easily turn against that same apparatus.""
Posted by Tony at 6:51 AM