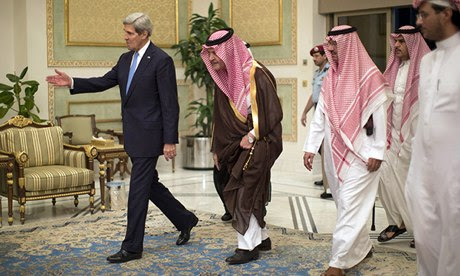 One direction? – John Kerry, with the Saudi foreign minister (in brown), Prince Saud al-Faisal bin Abdulaziz Al Saud, in Riyadh this month. What does this deal mean for US-Saudi relations? Photograph: Jason Reed/AP
"It is too early to tell whether the Geneva nuclear agreement heralds a genuinely new phase in the tangled web of relations between the west,Iran, Israel and the Arabs. But initial reactions suggest it is a big deal – and one that has the potential at least, over time, to change the status quo of more than 30 years.
By the time the dramatic news came through from Switzerland, it was already morning in Tehran, Riyadh and Jerusalem so the early hours of Sunday echoed to the rumbling of a tectonic shift in the Middle East – and scrambling by governments to work out their response in an altered situation.
Mutual hostility between Iran and the US has formed the backdrop to much else that has happened since the great rupture of 1979, when a staunchly pro-American dictator was overthrown by the Islamic Revolution. The eight-year war launched by Saddam Hussein against Ayatollah Khomeini and the subsequent Iraqi invasion of Kuwait took place in the shadow of that estrangement.
Efforts at peacemaking between Israel and its Palestinian and other Arab enemies have also faced complications because of Iranian hostility to the US and Israel – whose own undeclared (but internationally tolerated) nuclear arsenal is a significant element of this story. Lebanon's Hezbollah, the strongest non-state actor in the region, remains one of Tehran's most potent assets.
And the Middle East's worst current crisis, the devastating war in Syria, is in some ways the frontline of a strategic and sectarian confrontation, fought both directly and by proxy, between Iran and the US-backed conservative monarchies of the Gulf.
It was no coincidence that President Bashar al-Assad's government was so quick to hail the "historic accord" in Geneva. Russia, Assad's main international ally and protector, has also done well out of the P5 + 1 negotiation, enhancing its role as a mediator.
So the nuclear agreement may help trigger some movement in the Syrian stalemate if Tehran and Moscow use their influence with Damascus. That may make it easier to convene the long-delayed Geneva II conference, though prospects for a diplomatic end to the war remain slim as long as the rebels insist Assad must go. Opposition supporters fear he will now feel emboldened.
There are plenty of other reasons for caution. The deal is an interim one for six months and the sanctions relief it brings will be reversible. It faces threats from hardliners in Tehran and Washington. It is also still hard to envisage the often mentioned "grand bargain" between these old enemies – not least because there are so many outstanding contentious issues that have not been addressed.
Israel, looking uncomfortably isolated, has made its position clear, with Binyamin Netanyahu condemning the agreement as a "historic mistake". But the reality is that Israel's ability to attack Iranian nuclear facilities – without overt or covert US help – now looks like a hollow threat, for political reasons as well as the limited capabilities of even its formidable air force. It will also fear renewed pressure to come clean about its own nuclear arsenal – still a regional monopoly.
Elsewhere, the discomfort is most obvious in Saudi Arabia and the smaller Gulf states, which have long seen Iran as a greater threat and strategic rival than Israel. Pejorative talk of a "Zionist-Wahhabi" alliance reflects that. King Abdullah, as revealed by WikiLeaks, famously urged Barack Obama to "cut off the head of the [Iranian] snake". Instead, the US president has done a deal with it. The silence in Riyadh on Sunday morning was thunderously eloquent.
It would be smart of the Iranians to extend their current charm offensive to their Gulf neighbours but it will likely be difficult to allay suspicions, especially in Riyadh. Viewed from the heartlands of the Middle East, the most striking conclusion of the Geneva drama is that the US is now prepared to act more independently of its traditional allies – the Israelis and Saudis– than ever before.
That appears to confirm the dawning realisation that Obama is simultaneously pivoting away from the region while helping to craft its new realities."
Posted by Tony at 8:11 AM