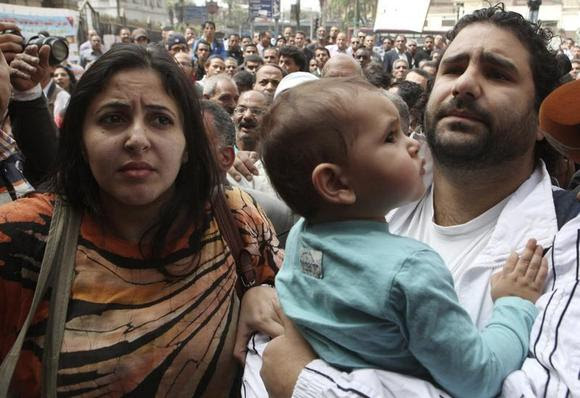 Alaa Abdel Fattah (R), one of the activists who was summoned by the public prosecutor on whether he had a role in the recent violent anti-Islamists protests, arrives with his wife and child to the public prosecutor's office in Cairo, March 26, 2013.
CREDIT: REUTERS/ASMAA WAGUIH
""(Reuters) - Twelve prominent Egyptian dissidents were given one-year suspended jail terms on Sunday in a case brought over an attack on the campaign headquarters of defeated presidential candidate Ahmed Shafik during the 2012 election.
The activists include siblings Alaa Abdel Fattah and Mona Seif, leading figures in the protest movement that triggered the 2011 uprising against autocrat Hosni Mubarak but is now facing a widening crackdown by the army-backed authorities.
Sunday's verdict related to an attack on Shafik's campaign headquarters ahead of the presidential run-off against the Muslim Brotherhood's Mohamed Mursi in the 2012 election.
The Cairo court convicted them of "displaying force" and setting fire to the building during the attack, charges they had denied.
"The ruling was political," Mona Seif told Reuters TV after the verdict was announced. She said there was no evidence or witnesses to back up the ruling against the dozen defendants.
The case was brought earlier this year by a public prosecutor appointed by Mursi in what activists said at the time was an attempt by his administration to intimidate the pro-democracy movement.
Since the military overthrew Mursi in July, the army-backed authorities have launched a fierce crackdown on dissent that has mostly targeted Mursi's Islamist supporters but has recently widened to include members of the secular activist movement.
Alaa Abdel Fattah faces trial in a separate case on charges of breaking a new law that makes it a crime to protest without police permission. He has been in custody since November 28.
The government escalated its efforts to suppress Mursi's Muslim Brotherhood last month by declaring it a terrorist organization, giving the authorities even wider scope to jail its supporters.


In another case, a court on December 22 handed three year prison sentences to three other leading activists over recent protests - a ruling that drew condemnation from Western governments and local and international rights groups.
Posted by Tony at 6:53 AM