I helped destroy Falluja in 2004. I won't be complicit again

The media accepts the overly simple narrative that al-Qaida took over. The reality is Maliki is crushing dissent with US-made arms 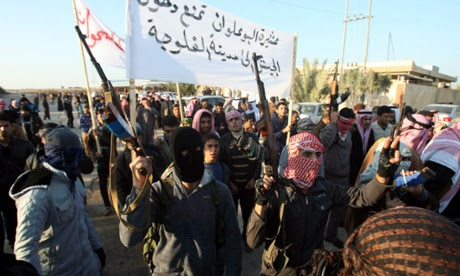 Members of Albu Alwan tribe protest against the military operation in Fallujahcity, western Iraq. Photograph: Mohammed Jalil/EPA
"I am having flashbacks to my time as a Marine during the 2nd siege of Falluja in 2004. Again it is claimed that al-Qaida has taken over the city and that a heavy-handed military response is needed to take the city back from the control of terrorists.
The first time around, this claim proved to be false. The vast majority of the men we fought against in Falluja were locals, unaffiliated with al-Qaida, who were trying to expel the foreign occupiers from their country. There was a presence of al-Qaida in the city, but they played a minimal and marginal role in the fighting. The stories about Abu Musab al-Zarqawi, the alleged leader of al-Qaida in Iraq who was said to be recruiting an army in Falluja, were wildly exaggerated. There is no evidence that Zarqawi ever even set foot in Falluja.
This week, the Iraqi Ministry of Interior's assertion that al-Qaida's affiliate, the Islamic State of Iraq and Syria, has taken over half of Falluja is being parroted as a headline by almost every major media network. But again, it appears that the role of al-Qaida in Falluja is being exaggerated and used as a justification for a military assault on the city.
The violence began just over a week ago, when Iraqi security forces disbursed a protest camp in Falluja and arrested a politician who had been friendly to the protestors goals. This camp was part of a nonviolent protest movement – which took place mostly in Sunni cities, but was also receiving some support from the Shia community – that began a year ago. Iraqi security forces have attacked protestors in Falluja and other Sunni cities on several occasions, the most egregious example taking place in Hawija when over 50 protestors were killed.
One of the results of the US occupation was that Sunnis came out of it feeling like a targeted community, with Falluja being more marginalized than most Sunni cities because of its history as a center of resistance. These feelings have only been exacerbated over the past year of protest and government repression.
The Iraqi government's recent actions in Falluja turned the nonviolent movement violent. When the protest camp in Falluja was cleared, many of the protestors picked up arms and began fighting to expel the state security forces from their city. It was local, tribal people – people not affiliated with transnational jihadist movements – who have taken the lead in this fight against the Iraqi government.
However, it is being reported that Falluja has "fallen", that it was "captured" by ISIS, who has now raised their flag over the city, declaring Falluja an Islamic emirate. The Iraqi Ministry of Interior's claim that half of Falluja is controlled by ISIS has been accepted as fact and has framed all discussion of these events.
Feurat Alani, a French-Iraqi journalist with family ties in Falluja, has reported that ISIS is not playing a significant role in the fighting in Falluja. Much has been said and written about ISIS raising their flag over a building in Falluja. This has been taken to be a sign of their power in the city. But Alani told me:

They took the flag down five minutes later when ordered to by tribal leaders. This shows that the tribes control Falluja.

Already over 100 civilians have been killed in this violence, violence that has been facilitated by US weapons. The Independent reported that Iraqi security forces are bombing Falluja with Hellfire missiles sold to them by the US. But the US has supplied the Iraqi state with far more than this single weapon system. Recently, Congress has shown some reluctance to continue arms trade with the Maliki government, for fear that it would use the weapons for internal repression, a fear that appears to have some justification.
It is being reported that Falluja has fallen, but the voices from inside Falluja insist that their city is standing up, once again. Undoubtedly, Fallujans are being harmed because of how the outside world perceives their struggle. Too much of the world has been satisfied with the overly simple narrative of al-Qaida capturing Falluja (twice) and government forces battling for freedom and security.
As Falluja relives a nightmare, once inflicted by my own hand, I find myself in a very different position from before. Today, I hope I can say that I am somewhat wiser, more responsible, more morally engaged than I was when I helped destroy Falluja in 2004. This time around, I cannot sit back and do nothing as the unreliable and self-serving claims of the government get reported without question and are repeated until they become conventional wisdom. I cannot just watch as Fallujans are again forced to flee from their homes, and as their bodies are again shredded by weapons made in my homeland. I do not want to feel complicit in their suffering anymore."
Posted by Tony at 6:29 AM