President Abbas and his addiction to secret negotiations 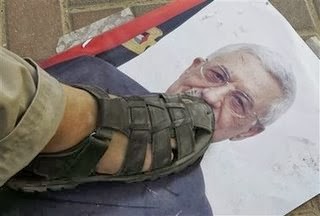 "The Palestinian President Mahmoud Abbas is addicted to negotiations and secret channels with the Israelis and therefore it was not surprising when it was revealed that secret meetings had been held in London between Basel Aqel, one of his top advisors, and Isaac Molcho, Israeli Prime Minister Benjamin Netanyahu's right hand man.

The spokesperson for the Palestinian Authority, Nabil Abu Radina, denied such negotiations and stated that Basel Aqel, a Palestinian businessman and Palestinian National Council member, had the meeting on his own. However, Israeli reports on one hand and the resignation of the Palestinian negotiations delegation on the other make this denial unconvincing, especially since the denial was weak and brief. Israeli newspapers also stress that it is false and have revealed tours and meetings in London attended and confirmed by Efraim Sneh himself.
We can neither understand nor accept the route taken by President Abbas, i.e. opening secret negotiation channels at a time when his closest men such as Dr Saeb Erekat and Dr Mohamed Eshtieh are publically negotiating with Molcho himself and Tzipi Livni after abandoning all the Palestinian conditions. This reminds us of the events of 1992 when Abbas got involved in secret negotiations in Oslo while the Palestinian delegation, led by the late Dr Haidar Abdel-Shafi, was negotiating with the Israelis in the context of the Geneva Peace Conference with the other Arab countries.
Dr Erekat and Dr Eshtieh are members of the Fatah executive committee and are President Abbas's confidants, so why would he by-pass them in such a humiliating manner and convey them as the deceived partner? If he didn't trust them, he shouldn't have charged them with the task of negotiations.
Moreover, why did Abbas send his advisor to London to negotiate in secret and reach an agreement while his negotiators, who are publically negotiating, have announced that talks have reached an impasse and that there is no point in continuing, and while he himself - only a few kilometres away from occupied Jerusalem and Tel Aviv - is under Israeli occupation and cannot move without informing and receiving the permission of the Israeli internal security? Why would he burden the broke Palestinian treasury with more debt?
The Palestinian president has been negotiating for 20 years without reaching any results and instead receives more insults, settlements, and crippling Israeli conditions; hasn't he given up, isn't he bored? Isn't it time to get treatment and in turn recover from the disease of secret negotiation addiction?
We thought that Dr Erekat, who famously said "life is negotiations" was the only one afflicted with this addiction. But it seems he is merely a student of President Abbas's academy.
I believe the problem does not only lie in President Abbas and his negotiating team, but also in the Palestinian people who have accepted such a mockery to go on before their eyes, in particular the Palestinian movements and groups."
Posted by Tony at 7:57 AM