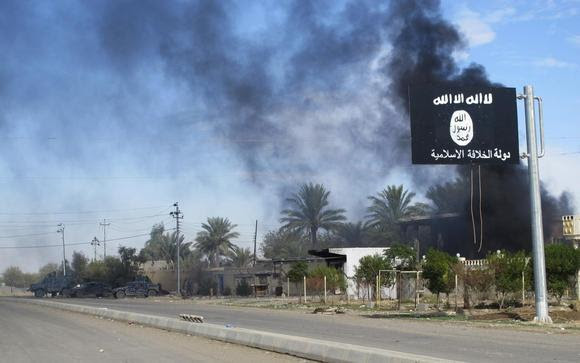 (Reuters) - They have made enemies across the globe and endured three months of U.S.-led air strikes, but Islamic State fighters have surrendered little of their self-declared caliphate to the broad sweep of forces arrayed against them.
Across thousands of square miles in Syria and Iraq, the radical Islamists face an unlikely mix of Iraqi and Syrian soldiers, Shi'ite and Kurdish militias and rival Syrian Sunni Muslim rebels.
While they have lost towns on the edges of their Iraqi realm, especially in ethnically mixed areas where their hardline Sunni theology holds little appeal, they have consolidated power in parts of their Sunni Muslim heartland.
In August, Islamic State's attack on Iraqi Kurdish regions was repulsed and two months later its fighters were driven from the town of Jurf al-Sakhar, south of Baghdad. It was also pushed out of two towns near the Iranian border last month.
But with a few exceptions, such as the army's breaking of an Islamic State siege of the country's largest oil refinery in Baiji, the militants' hold over predominantly Sunni provinces north and west of Baghdad has not been seriously challenged.
Islamic State's opponents say the recaptured towns show the tide has turned in Iraq and the group is on the defensive.
"The best they can do now is to cut a road or attack a patrol, but any advances and gains of territory have been completely stopped." said Hadi al-Amiri, head of the Badr Organization, a Shi'ite militia which along with Kurdish peshmerga spearheaded the recapture of Saadiya and Jalawla, near the Iranian border.
Islamic State leader Abu Bakr al-Baghdadi, rallying his fighters three weeks ago, said the U.S. despatch of more military advisers to Iraq showed the opposite was true.
"The Crusaders' air strikes and constant bombardment day and night of Islamic State positions have not prevented its advance," he said.
In fact, since Islamic State's June offensive, it has had little success breaking beyond the solidly Sunni Muslim provinces of Anbar in the west and Salahuddin north of Baghdad, as well as the strongly Sunni province of Nineveh, home to the city of Mosul which the Islamists overran in June.
Iraqi security expert Hisham al-Hashemi said the picture across Iraq overall was a stalemate, with government forces regaining some territory but Islamic State imposing itself more forcefully at its core.
He said Islamic State now controls 85 percent of Anbar province, where it is attacking the provincial capital Ramadi and has killed hundreds of Sunni tribesmen who opposed it.
"The tipping point for defeating them in my view is when we win over the Sunni Arab tribes in Anbar, Salahuddin and Nineveh ... that will be the beginning of the end of ISIS," saidFinance Minister Hoshiyar Zebari, using a former name for Islamic State.
SYRIAN "NON-STRATEGY"
While in Iraq there are clear areas where Islamic State is on the defensive, in Syria it is under less pressure because the U.S. has few allies on the ground backing up its air offensive.
Washington has been clear that its policy in Syria is modest compared to Iraq, focusing on preventing Islamic State moving across the border and on hitting its command and control.
But the militants in Syria, and Western analysts, say the air campaign has failed to weaken them.
Anthony Cordesman, from the Center for Strategic and International Studies, said the U.S. is pursuing a "non-strategy" in Syria, hamstrung by conflicting priorities of dealing with Islamic State and President Bashar al-Assad.
The result was a "strategic mess" allowing Assad's forces to step up air attacks on other rebel groups, some sympathetic to Washington, while leaving Islamic State targets to U.S.-led coalition forces.
Islamic State supporters say the air strikes have helped the group win support among residents and also attracted more fighters.
"Do they think bombing us will scare us and we will just run home?" said a fighter in the IS-controlled city of Raqqa.
"When the whole world is trying to save Kobani we are expanding and growing in Iraq and Syria," he said, referring to the battle for the Kurdish border town in north Syria.
The Pentagon said last month the strikes in Syria had hit Islamic State resources including oil installations, command facilities and training camps.
"We know that they continue to attract people to their ranks," he said. "You don't wipe that out through air strikes, and you certainly don't do it in 90 days."
U.S. Secretary of State John Kerry said that around 1,000 strikes in both countries were having a significant impact.


But an Islamic State fighter in Syria was scornful. "Before you defeat your enemy you must understand it," he said. "This is the first rule in combat and these idiots missed it."
Posted by Tony at 7:46 AM