Isis closes in on Damascus after seizing Yarmouk refugee camp


For more than 50 years, Yarmouk refugee camp was used as a showpiece of Syrian support for the Palestinian cause.
Now, after three years of war and siege, jihadists of the Islamic State (Isis) stalk its ruins, the regime bombs the buildings that still stand and the few remaining residents must choose between abject misery if they stay and likely death if they flee.
More than anywhere else in Syria, the fight for Yarmouk – especially since Isis stormed the camp on 9 April – has captured the shifting allegiances and, at times, cynical complexities that now define the myriad battlefields across the ruined country.
Most of the 200,000 or so Palestinians who lived in Yarmouk until late 2012 are now second-time refugees, either elsewhere in Syria, across the border in Lebanon or in Jordan. 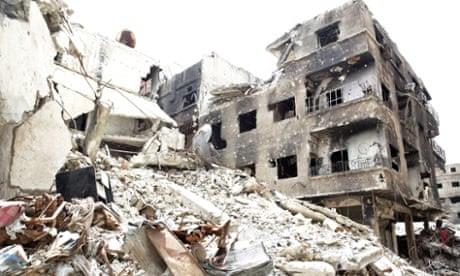 'Yarmouk is being annihilated': Palestinians in Syria are left to their fate

Read more
Their leaders, meanwhile, remain deeply factionalised, unable to ease the regime siege or to stem the flow of the jihadists, who stormed the camp after four months of organising on the doorstep of Damascus, potentially changing the face of the fight for the capital.
Activists, diplomats and former camp residents contacted by the Guardian said recent events may end up proving decisive in the fight for central Damascus, only six miles north of the camp, which is in effect a suburb of the city.
With the shock of the jihadist incursion subsiding, the narrative of the regime siege is starting to change. Syrian officials have offered to rescue civilians, to whom they had denied safe refuge for more than two years. The jihadists are also attempting to claim a relative moral high ground by insisting that only they can break the blockade, after the failure of the armed opposition and the Palestinian leaders to do so.
Activists said that Isis, although present in the Hajar al-Aswad neighbourhood south of Yarmouk for at least the past six months, was not seen as a threat to the militant groups opposing the regime from within its borders, or to its estimated 16,000 residents.“They are now casting themselves as saviours of the Palestinians after besieging them for all that time,” said a western diplomat in Beirut of the regime of Bashar al-Assad. “They want to be seen as liberators, not persecutors, and this cause has worked very well for them in the past.”
The neighbouring Yalda area had remained relatively calm for the past year as a result of a locally negotiated ceasefire between regime and opposition forces, as had the surrounding area, despite Isis’s attempts to slowly gain a foothold.
Most of the estimated 600 Isis fighters who now control up to 80% of Yarmouk are local men who were previously aligned to other opposition groups, camp insiders say. Some of the militants had previously been exiled, and most of those who returned were smuggled in by the al-Qaida-aligned Jabhat al-Nusra, which remains a staunch foe of Isis in northern Syria.
“They mostly had a bad reputation and were known for thievery,” one activist said of the jihadists now in control of Yarmouk. In northern and eastern Syria, foreign jihadists led predominantly by veterans of the Iraqi civil war are immersed in more of an ideological fight.
“[Isis] is coming back today to take revenge from the civilians who evicted them, but people were unable to stand up to them because of their savagery and the fact they were well armed with medium and light weapons,” said the activist who fled to the camp’s outskirts.
Over the past five days, Syrian helicopters have dropped up to 12 barrel bombs on the camp, while reinforcing its borders to the west. Now that Isis controls the area, which is roughly five miles square, its fighters appear to be as hemmed in as the remaining civilians.
“They’ve walked into a trap from which there is no escape,” the diplomat said.
The Palestine Liberation Organisation (PLO) has maintained a low profile throughout the siege, which has repeatedly been described by the UN Relief and Works Agency (UNWRA) as an atrocity. Throughout the past two years, the UN body has only been able to secure piecemeal access to starving residents, some of whom have died from hunger and thirst.
“The violence that began in Yarmouk on 9 April is not just continuing, it has intensified,” said UNRWA spokesman Chris Gunness. “Yarmouk is at the lower reaches of hell. It must not be allowed to descend further.”
“The situation is different now,” said Fathi Aboul Ardat, the PLO official in Lebanon, describing the arrival of Isis inside Yarmouk as a dangerous and unprecedented step.
When asked whether the PLO could deal with the regime, which has imposed a two-year siege on Yarmouk, he replied: “We deal with a state.”
A Palestinian academic from Yarmouk who visited the camp late last year said the PLO’s overtures to the regime are part of an internal competition between Fatah, which dominates the PLO, and Hamas, which fell out with Assad after it declared its support for the original uprising.
“All of the Palestinian organisations have been unable to rescue the Palestinians,” he said. “We need salvation. We are in the 21st century and Palestinians are dying of hunger.
“It’s not that they are selling out the Palestinians. They are incapacitated. The Palestinian organisations are like the former Ottoman Empire; they are the sick man.”