Sunni v Shia: why the conflict is more political than religious

Across the Middle East, sectarianism has always been linked to the battle for power, resources and territory

Time was, across the Arab world, that it was simply rude to ask people their religion or sect, even if it was obvious from their name, their accent, from where they lived or worshipped or the pictures on their walls that they were a Sunni Muslim, Shia, or Christian.
In the glory days of the post-colonial era the focus was on creating an overarching Arab and national identity. Syria, with its mosaic of Sunnis, Alawites, Druze and many Christian communities, boasted of being the “beating heart of Arabism”. Even in Lebanon, with its elaborate power-sharing arrangements, confessional identity remained a private matter. Intermarriage was common.
The Ba’ath party, which ruled in both Baghdad and Damascus, was the creation of a Christian ideologue, Michel Aflaq. Two radical Palestinian leaders, George Habash and Nayef Hawatmeh, were Christians. So was George Antonius, the great historian of Arab nationalism. 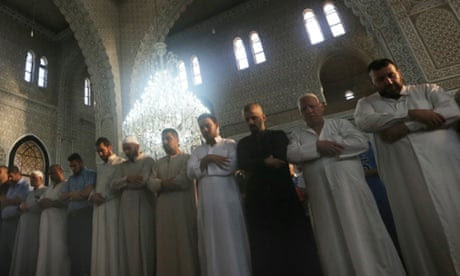 Read more
In Iraq, carved by the British out of three Ottoman provinces, a poor, largely rural, Shia majority, a Sunni minority, and the Kurds were the predominant groups. Saddam Hussein, a Sunni, tried to co-opt them all; all were oppressed.
Change was driven by Iran’s Islamic revolution of 1979, a cataclysmic moment in Middle Eastern history and an inspiring one for downtrodden Shia everywhere. Saddam’s invasion of Iran in 1980 was billed as an Arab war against Persians – and was bankrolled by the Arab and Sunni Gulf states. In 2003, when Saddam was overthrown, Iraqi Shia celebrated by invoking the martyrdom of their revered Imam Hussein at the hands of the Sunni Umayyads at the battle of Kerbala in 680.
Sectarianism reflects real religious differences and defines “otherness”, but it has always been linked to power, resources and territory. In Bahrain, the Sunni Al Khalifa dynasty rules over a Shia majority denied its rightful place in the system, but Manama blames Tehran for fomenting unrest. Saudi Arabia similarly accuses Iran of causing trouble in the Shia-dominated east. In both cases the accusation masks genuine local problems.

Over the past four years the vicious war in Syria has amplified sectarian sentiment so that Alawites are now identified en masse with Bashar al-Assad and Sunnis with the opposition. Lebanon’s Hezbollah, a militant Shia group backed by Iran and supporting Assad, reinforces this binary narrative. But disputes exist of course within sects while other ties transcend religious identity.
In its heyday, al-Qaida targeted the “far enemy” – America in particular. But the Islamic State has placed anti-Shia sentiment at the centre of its poisonous ideology. Abu Bakr al-Baghdadi, its “caliph”, has ignored pleas by Ayman al-Zawahiri, Osama bin Laden’s successor, to refrain from the indiscriminate killing of Shia and, instead, to attack the Shia-dominated and Alawite regimes in Iraq and Syria.Extremist Sunni preachers based in Saudi Arabia or Kuwait abuse Shia as “idol-worshippers” – the intolerant language of Wahhabi exclusivity. Iranians are scorned as “Safawis”, a pejorative reference to the 16th-century Safavid dynasty. Fanatical jihadis such as the Islamic State justify the killing of “apostates” under the doctrine of “takfir”.
Yusuf al-Qaradawi, the influential Sunni cleric given a platform by al-Jazeera TV, famously denounced Hassan Nasrallah of Hezbollah (the “party of God”) as the leader of the “party of Satan”.
So sectarianism has certainly raised its ugly head in recent years – but a lot of people have worked hard to make that happen. And social media has made it easier than ever to spread toxic and intolerant messages.
Yet sectarianism is not the main cause of divisions in the Middle East. Yemen’s deepening crisis involves the rebel Houthis of the Zaydi sect, linked to Shia Islambut close to the country’s majority Sunni doctrine. The support they get from Iran is primarily about winning allies and projecting power – the main reason the Houthis face armed intervention from Saudi Arabia.
To say that Iran backs the Houthis for religious reasons “is like assuming that Scottish Presbyterians will always support Southern Baptists because both are forms of Protestantism”, says Juan Cole, a US academic and commentator on the Middle East. It is the geopolitical context that gives this conflict its sectarian hue, not the other way round.
Egypt’s Muslims are monolithically Sunni but the 2011 revolution and its divisive and repressive aftermath have seen the Coptic Christian minority identified as supporters of the old regime and targeted by Islamist extremists.
In the Maghreb, where the Arab spring began so hopefully with the Tunisian uprising, sectarianism is not an issue, though extremism has spread back poisonously from the war in Syria and the growth of Isis. In Libya, Morocco and Algeria, Berber rights and identity are important, but not the focus of a crisis.
It is worth remembering that the Arab awakenings began everywhere with calls for secular reform. “Whatever tribe, clan, religion, sect or ethnic group they belonged to, citizens asked for ‘dignity’ before anything else,” wrote Talal Salmanin the Lebanese paper al-Safir. “It was only over time that sectarian tendencies came to the forefront. As transitions appeared to be regressing, people increasingly chose to identify themselves along tribal or confessional lines, rather than political ones.
“Arabs today are like brothers and enemies at the same time. Each subgroup brandishes its religious or ethnic identity to confront the other subgroup in a futile war, in which all will lose … In short, the fall of Arabism as a unifying identity will mark the start of a series of civil wars among brothers. And once those wars start, nobody knows when or how they will end.”