Barack Obama is playing all sides against each other, but support for the Saudi war in Yemen will only spread conflagration in the Middle East 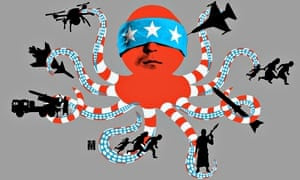 So relentless has the violence convulsing the Middle East become that an attack on yet another Arab country and its descent into full-scale war barely registers in the rest of the world. That’s how it has been with the onslaught on impoverished Yemen by western-backed Saudi Arabia and a string of other Gulf dictatorships.
Barely two weeks into their bombardment from air and sea, more than 500 have been killed and the Red Cross is warning of a “catastrophe” in the port of Aden. Where half a century ago Yemenis were tortured and killed by British colonial troops, Houthi rebels from the north are now fighting Saudi-backed forces loyal to the ousted President Abd Rabbu Mansour Hadi. Up to 40 civilians sheltering at a UN refugee camp in the poorest country in the Arab world were killed in a single Saudi air attack last week. 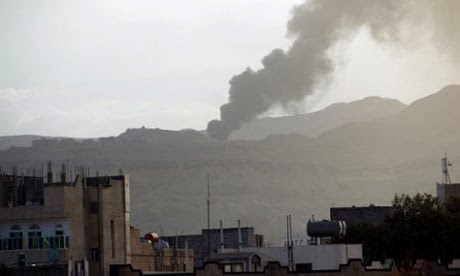 Somalia lends support to Saudi-led fight against Houthis in Yemen

Read more
But of course the US and Britain are standing shoulder to shoulder with the Saudi intervention. Already providing “logistical and intelligence” support via a “joint planning cell”, the US this week announced it isstepping up weapons deliveries to the Saudis. Britain’s foreign secretary, Phillip Hammond, has promised to “support the Saudi operation in every way we can”.
The pretext for the Saudi war is that Yemen’s Houthi fighters are supported by Iran and loyal to a Shia branch of Islam. Hadi, who was installed after a popular uprising as part of a Saudi-orchestrated deal and one-man election in 2012, is said to be the legitimate president with every right to call on international support.
In reality, Iran’s backing for the homegrown Houthis seems to be modest, and their Zaidi strand of Islam is a sort of halfway house between Sunni and Shia. Hadi’s term as transitional president expired last year, and he resigned in January before fleeing the country after the Houthi takeover of the Yemeni capital Sana’a. Compare Hadi’s treatment with the fully elected former president of Ukraine, whose flight from Kiev to another part of the country a year ago was considered by the western powers to have somehow legitimised his overthrow, and it’s clear how elastic these things can be.
But the clear danger of the Saudi attack on Yemen is that it will ignite a wider conflagration, intensifying the sectarian schism across the region and potentially bring Saudi Arabia and Iran into direct conflict. Already 150,000 troops are massed on the Yemeni border. Pakistan is under pressure to send troops to do Riyadh’s dirty work for it. The Egyptian dictator Abdel Fatah al-Sisi has said he will despatch troops to fight in Yemen “if necessary”.
The Houthi uprising, supported by parts of the army and Hadi’s predecessor as president, has its roots in poverty and discrimination, and dates back to the time of the US-British invasion of Iraq more than a decade ago. But Yemen, which has a strong al-Qaida presence, has also been the target of hundreds of murderous US drone attacks in recent years. And the combination of civil war and external intervention is giving al-Qaida a new lease of life.

For the Saudis, Yemen is about enforcing their control of the Arabian peninsula and their leadership of the Sunni world

The idea that the corrupt tyranny of Saudi Arabia, the sectarian heart of reaction in the Middle East since colonial times, and its fellow Gulf autocracies – backed by the Israeli prime minister Binyamin Netanyahu – are going to bring stability, let alone freedom, to the people of Yemen is beyond fantasy. This is the state, after all, that crushed the popular uprising in Bahrain in 2011, that funded the overthrow of Egypt’s first elected president in 2013, and has sponsored takfirijihadi movements for years with disastrous consequences.
For the Saudis, the war in Yemen is about enforcing their control of the Arabian peninsula and their leadership of the Sunni world in the face of Shia and Iranian resurgence. For the western powers that arm them to the hilt, it’s about money, and the pivotal role that Saudi Arabia plays in protecting their interests in the oil and gas El Dorado that is the Middle East.
Since the disasters of Iraq and Afghanistan, the US and its allies are reluctant to risk boots on the ground. But their military interventions are multiplying. Barack Obama has bombed seven mainly Muslim countries since he became US president. There are now four full-scale wars raging in the Arab world (Iraq, Syria, Libya and Yemen), and every one of them has involved US and wider western military intervention. Saudi Arabia is by far the largest British arms market; US weapons sales to the Gulf have exceeded those racked up by George Bush, and last week Obama resumed US military aid to Egypt.
What has changed is that, in true imperial fashion, the west’s alliances have become more contradictory, playing off one side against the other. In Yemen, it is supporting the Sunni powers against Iran’s Shia allies. In Iraq, it is the opposite: the US and its friends are giving air support to Iranian-backed Shia militias fighting the Sunni takfiri group Isis. In Syria, they are bombing one part of the armed opposition while arming and training another.

A tilt towards Iran can be offset with war in Yemen or Syria. Something similar can be seen in Latin America

The nuclear deal with Iran – which the Obama administration pushed through in the teeth of opposition from Israel and the Gulf states – needs to be seen in that context. The US isn’t leaving the Middle East, as some imagine, but looking for amore effective way of controlling it at arm’s length: by rebalancing the region’s powers, as the former MI6 officer Alastair Crooke puts it, in an “equilibrium of antagonisms”.
So a tilt towards Iran can be offset with war in Yemen or Syria. Something similar can be seen in US policy in Latin America. Only a couple of months after Obama’shistoric opening towards Cuba last December, he signed an order declaring Cuba’s closest ally, Venezuela, “an unusual and extraordinary threat to US national security” and imposed sanctions over alleged human rights abuses.
Those pale into insignificance next to many carried out by the US government itself, let alone by some of its staunchest allies such as Saudi Arabia. There’s no single route to regime change, and the US is clearly hoping to use the opportunity of Venezuela’s economic problems to ratchet up its longstanding destabilisation campaign.


But it’s a game that can also go badly wrong. When it comes to US support for Saudi aggression in Yemen, that risks not only breaking the country apart but destabilising Saudi Arabia itself. What’s needed is a UN-backed negotiation to end the Yemeni conflict, not another big power-fuelled sectarian proxy war. These calamitous interventions have to be brought to an end.