The Syrian regime of President Bashar al-Assad is under mounting pressure on several fronts in the war, losing swathes of territory to opposition fighters as well as Islamic State, with strategic resources under its control coming under attack.
Assad’s defeats in Idlib, eastern Homs and Daraa in the south, combined with renewed pressure in Aleppo and Deir Ezzor to the east and the possible loss of gas fields to Isis has left the regime in a precarious position with little choice but to concentrate its forces in its western strongholds, ceding much of the country to the opposition and Isis.
Meanwhile the rebels, buoyed by a series of victories against Assad, face new challenges in governing areas under their control as well as aerial bombardment by the regime and assaults by Isis in an increasingly complex battlefield. 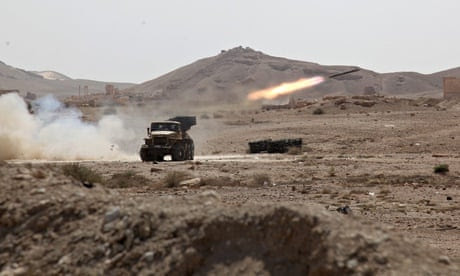 Amid the ruins of Syria, is Bashar al-Assad now finally facing the end?

Read more
“This is definitely the most strategically weak position the regime has found itself in since early 2013, but it should not be entirely overplayed yet,” said Charles Lister, a visiting fellow at the Brookings Doha Center and author of the book Profiling the Islamic State. “What seems to be happening is a redrawing of the power map in Syria, with the regime seemingly more willing to cede territory outside of its most critically valuable zones.”
The Southern Front, a coalition of mainstream, western-backed rebels, seized a major military base, known as Brigade 52, in the province of Daraa this week after a lightning six-hour offensive on the facility which lies near a highway to Damascus and contains large caches of ammunition and materiel.
The rebels also claimed to have shot down a regime MiG plane on Thursday with anti-aircraft guns.
The regime’s collapse in the strategic base in Daraa came after similar rapid disintegrations elsewhere in the country. In the historic city of Palmyra, east of Homs, regime forces fled after a week-long siege by Isis militants, leaving behind thousands of civilians and the city’s ancient ruins to the mercy of the terror group. 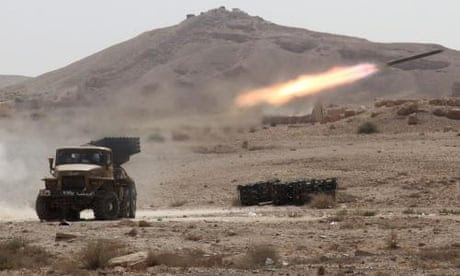 Read more
In late May, a coalition of rebel forces known as Jaish al-Fateh, which includes the al-Qaeda affiliate in Syria, Jabhat al-Nusra, conquered the last major regime stronghold in Idlib province in the city of Ariha in just four hours, leaving nearly the entire province in rebel hands.
But now the rebels will have to govern the large swathes of territory seized from Assad, under the threat of relentless, punitive air strikes on areas that the regime has lost.In Aleppo, a rebel alliance of primarily Islamist fighters is battling both the regime and Isis, and recently announced a joint operations command intending to take control of the entire city, while moving to cut off regime supply lines in what was once Syria’s commercial capital. The rebels had once appeared weak, losing 1,500 fighters in an offensive last year that evicted Islamic State from the city.
The rebel advances came after well-publicised regime offensives in Aleppo as well as in the south, which involved the Lebanese group Hezbollah, faltered in the face of opposition resistance.
In a statement released on Wednesday, Jabhat al-Nusra also called for the creation of a unified rebel army in Ghouta, a suburb of Damascus, to take on Assad’s loyalist forces. The group’s leader, Abu Mohammad al-Jolani, said in a recent interview that they would soon set their sights on the capital, seeing its fall as a mortal blow to the regime. 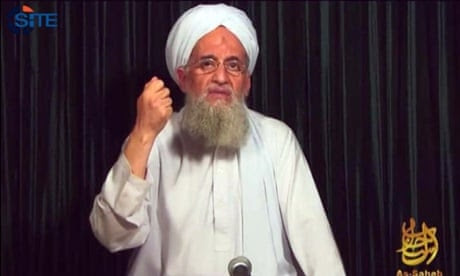 Al-Qaida 'cut off and ripped apart by Isis'

Read more
Analysts say the rapid defeats may be a sign that the regime is no longer willing to hold territory outside its western strongholds and is focusing instead on retrenching in the west, in a stretch of land that includes its coastal Alawite heartland, Homs, Hama and Damascus, straddling the Qalamoun mountain range on the border with Lebanon, where Hezbollah holds sway.
The move is a reflection of the demographic reality at play in a civil war involving a minority-led regime.
“Even Aleppo city may prove extraneous to its strategic priorities in the coming weeks and months,” said Lister. “The regime has undoubtedly suffered some serious losses recently, but until those strategic areas come genuinely under the threat, we’re a long way away from saying the regime’s survival looks existentially threatened.”
Isis also threatens some key strategic resources, particularly gas plants to the west of Palmyra, responsible for about half of the country’s electricity generation. While the militant group already controls the Arak and al-Hail gas fields near Palmyra, it has launched attacks to the city’s west on the Shaer gas field, and is inching closer to three other facilities in the area – Hayan, Jihar and Ebla.
The western fields produce roughly 350 million cubic feet of gas a day, or half of its wartime national electricity generation.
“They would be really key to the power supply to Damascus,” said Robin Mills, an oil and gas expert and non-resident fellow at the Brookings Doha Center.
The loss of the gas plants would likely force Iran, which has been supplying Assad with fuel oil and diesel during the war, to step up its contribution, Mills said.
It would also allow Isis to deny access to the power supply to the regime, as the militant group doesn’t have the expertise and equipment necessary to pump the gas out and use it in areas under its control. In addition, control of strategic areas in eastern Homs opens the road for the organisation to attack the regime’s western strongholds.
“This is more a case of denying the regime an important resource, than of Isis gain,” said Yezid Sayegh, an expert at the Carnegie Middle East Centre. “My assumption is that Isis’s primary goal in targeting these areas is military and strategic: it places Isis in a position to threaten the Damascus area, eastern Ghoutah, eastern Qalamoun, and Soueida province, as well as potentially pressure Homs.”
Posted by Tony at 8:47 AM