Before we negotiate with Assad, he has to stop the atrocities against Syrian civilians 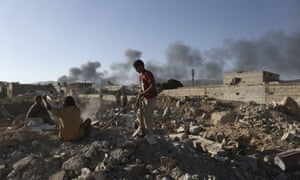 ‘The result of Assad’s actions has been the utter devastation of broad swaths of Ghouta (pictured), Aleppo, Idlib, Daraa and other areas held by the opposition.’ Photograph: Bassam Khabieh/Reuters
Link


The need to negotiate with leaders as unsavoury as Syria’s Bashar al-Assad is an unfortunate reality of diplomacy. But western leaders should be careful not to confuse that necessity with the idea promoted by Russiathat the Syrian crisis can be resolved only if Assad stays in power. Nor should they believe that Assad’s ongoing rule is the only way to prevent the collapse of the Syrian state and protect Syria’s diverse communities.
Vladimir Putin has long sought to portray Assad as a bulwark against the self-declared Islamic State. But far from a stabilising factor or a solution to the Isis threat to basic rights, Assad is a major reason for the rise of extremist groups in Syria. In the early days of Syria’s uprising, between July and October 2011, Assad released from prison a number of jihadists who had fought in Iraq, many of whom went on to play leading roles in militant Islamist groups. These releases were part of broader amnesties, but Assad kept in prison those who backed the peaceful uprising.


Read more
These releases helped to change the complexion of the Syrian rebellion from one with largely democratic aims, to one dominated by jihadists. That transformation has enabled Assad to refocus the narrative from his vicious rule to his claimed indispensability in the fight against Isis.
Once Isis became a significant force following its takeover of Raqqa in 2013, Assad’s military largely avoided confronting it. Conflict between the two has increased since the summer of 2014, but for many critical months, Assad largely left Isis alone, allowing it to consolidate its “caliphate”. Instead, Assad focused his firepower on other elements of the armed opposition.

Most important, Assad’s atrocities have been a recruitment bonanza for Isis and other extremist groups. The Syrian war has been so extraordinarily ugly because Assad has chosen to fight it not by simply targeting opposing combatants – the essence of wars fought in compliance with the Geneva Conventions – but by conducting indiscriminate attacks against civilians in opposition-held territory. His tools have ranged from denying civilians food and medical care to his notorious barrel bombs. The result has been the utter devastation of broad swaths of Ghouta, Aleppo, Idlib, Daraa and other areas held by the opposition. This warfare against civilians is a central reason for the flight of Syrian refugees, since it means that many can find no safe place within their country.
The evident rationale behind Assad’s strategy of war crimes has been to depopulate opposition-held areas, and to signal to other Syrians that they too will be attacked if the opposition prevails in their neighbourhoods. The chaos and vacuum left behind made it easier for Isis and other extremist groups to recruit fighters by arguing that they alone are actively opposing these mass atrocities. The hatred for Assad was evident in the difficulty the United States had trying to recruit people to fight only Isis.

Read more
Indeed, the rage generated by Assad’s method of fighting the war is probably the greatest threat to the Syrian state. The governing structures of the state are distinct from the Assad regime that now controls them, but the longer Assad and his cohorts use state power to slaughter civilians, the fewer the people who will make that distinction. The collapse of the state, as opposed to an orderly transition of the ruling regime, would be catastrophic.
Ending Assad’s systematic attacks on civilians is key to any realistic strategy for containing Isis, rebuilding the social fabric that is essential to countering extremism and preserving a functioning Syrian state. Given the animosity that these attacks generate, curbing them is probably also a prerequisite to any successful peace talks.
Unfortunately, Russia and Iran, the principal proponents of engaging with Assad, have generated no visible pressure to stop this slaughter. On the contrary, Russia has opposed stepped-up efforts at the UN security council to curb Assad’s use of barrel bombs.
It is time to stop closing our eyes to these horrific crimes. Halting Assad’s atrocities, as well as those by other groups, should be the first item on the agenda for any negotiation.
Posted by Tony at 7:51 AM