Fatigue, desertions and losses have taken heavy toll on Syrian army, estimated to be down from 300,000 to as little as 80,000


Syrian military weakness, painfully exposed over the last few months, is the main reason for direct Russian intervention in the war – whether its goal is to strike at Islamic State or, more likely, to take on any rebel force fighting Bashar al-Assad in order to shore up his position and stave off demands that he step down.
Officials and analysts say Moscow decided to deepen its involvement after the fall of the northern towns of Idlib and nearby Jisr al-Shughour in May served as a “wake-up call” about the parlous state of the Syrian army. Both were taken by the Jaysh al-Fateh (the Victory Army), a coalition of Islamist rebels.
Russia’s move was prompted in part by Assad’s other main ally, Iran, which plays a powerful though discreet role in Syria but is usually reluctant to commit its own forces. “The Iranians told the Russians bluntly: if you don’t intervene, Bashar al-Assad will fall, and we are not in a position to keep propping him up,” said a Damascus-based diplomat. 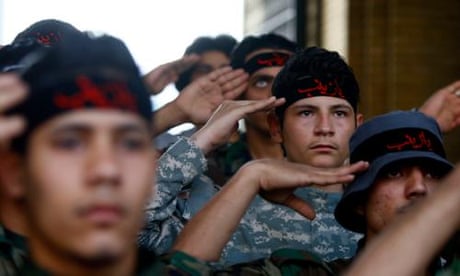 How Iran's shadowy role in Syria fuels paranoia and wariness

Read more
The strength of the regular Syrian army is estimated to be down from a pre-war figure of 300,000 to between 80,000 and 100,000. Fatigue, desertions and losses have taken a heavy toll, as has the sectarian nature of the conflict. That means once-loyal Alawites – the Assad family’s minority sect – are no longer ready to fight for Sunni areas but only to defend their own homes.
“Idlib fell very quickly because Syrian soldiers were simply not prepared to fight,” said one Syrian expert. “Ahrar al-Sham [one of the rebel groups] were surprised how quickly the regime defences crumbled.”
Assad’s forces are badly overstretched. In the Damascus area the Fourth Division of the elite Republican Guard, commanded by the president’s brother Maher, has failed to take back rebel-held territory such as eastern Ghouta, which was hit by a ferocious bombardment that killed some 240 people in mid-August.
Defending the capital and the surrounding countryside is a priority, though manpower shortages translate into a reluctance to fight in urban areas. So the suburb of Jobar is in the hands of Islamist fighters who lob mortar shells into government areas. Zabadani, a strategic town on the Lebanese border, was recaptured from rebels only with the help of Hezbollah and a Palestinian group loyal to Assad.
Assad addressed his mounting difficulties with rare candour in a speech in July, admitting to a shortage of manpower in the army and to having abandoned some areas in order to better defend what in the interwar years the French used to callla Syrie utile – Damascus through to Homs and the Alawite coastal area around Latakia.
Using that logic it made strategic sense to surrender Raqqa, the Isis “capital” in the north-east, and isolated spots such as Palmyra. Still, what is officially described as a policy of retrenchment is an “ex post facto rationalisation for defeat,” quipped one well-connected foreign adviser.

Young men fleeing for Europe often say they are prompted to leave by receiving their call-up papers or being ordered to report for reserve duty.Recruiting posters all over Damascus attest to the urgent need for more men to bear arms, as did a recent amnesty for deserters and draft dodgers. The strain shows: soldiers in the capital moonlight driving taxis, complaining of low wages eroded by steep price rises. Syrian officials often say that Jabhat al-Nusra, al-Qaida’s local affiliate, are paid far better than their own forces. Scruffy militiamen in camouflage trousers and T-shirts man security checkpoints.
Another factor in the decline of the regular army is the creation of a 125,000-strong locally based National Defence Force, which has been trained and paid by the Iranians, who also favour the use of Shia militia fighters from Iraq, Pakistan and Afghanistan as well as Hezbollah.
In the north the government is holding on to the western half of Aleppo, but Deir el-Zor and Hassakeh are under siege by Isis. The situation is easier in southernSyria, partly because a western-backed rebel offensive around Deraa has faltered. The army remains in overall control of an area that is studded with bases because of its proximity to the border with Israel.

Russia’s entry to Syrian conflict draws suspicion, amid evidence its military capability is designed to combat threats far beyond those posed by Isis
Read more
Russian airpower is seen in Damascus as a big boost – for combat missions and providing better intelligence. Military experts say that despite the destruction and loss of life they routinely cause in rebel areas, the Syria airforce’s fleet of ageing combat planes and helicopters are of limited value for tactical operations.
Rebels are convinced the direct Russian intervention means backing Assad to the hilt and, crucially, making no distinction between different enemies he characterises only as “terrorists”. According to an Ahrar al-Sham commander, the regime is planning a big offensive in the north to retake Idlib and the Western Ghab plain. That would open up the Homs-Hama highway, which would explain the targeting of Free Syrian Army and other non-Isis rebels in the Talbiseh and Rastan areas.
In the last 24 hours Syrians have reported seeing what appear to be Russian planes at the T4 airbase near Palmyra, and “very precise strikes” against Isis at the nearby Shaar gas and oilfield, which is strategically vital to supply the national power grid. If that Russian presence is permanent, any target in the country would be no more than a 20-minute flight away.
“When Isis first took over Palmyra, 224 civilians were killed by regime barrel bombing,” said a Syrian analyst. “Now the targeting was reasonably accurate, using air-to-ground missiles. So that may have been the Russians, and there are obviously new munitions being used.”
Posted by Tony at 7:48 AM