Israel has joined a growing chorus of concern over a reported Russian military buildup in Syria in support of the beleaguered regime of President Bashar al-Assad.
Speaking to reporters, Moshe Ya’alon, the Israeli defence minister, echoed claims by western sources that Moscow has in recent days dispatched military advisers and equipment with the main goal of setting up an airbase in the Syrian government-controlled area around Latakia. 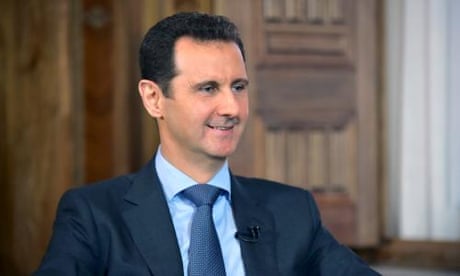 Read more
“As far as we understand, at this stage we are talking about a limited force that includes advisers, a security team and preparations for operating planes and combat helicopters,” Ya’alon said in a briefing on Thursday.
Ya’alon’s comments follow statements of concern on Wednesday from Nato chief Jens Stoltenberg and US secretary of state John Kerry, who phoned his Russian counterpart Sergei Lavrov to reiterate his concerns over recent Russian activity.
The information divulged in Ya’alon’s briefing closely resembles comments by US defence officials this week who said the US had seen a variety of Russian military assets flown into the airfield south of Latakia, including troops capable of protecting Russian forces there and modular housing units capable of accommodating up to 1,000 troops.
One US official said it indicated that the Russians were preparing for some sort of air operations.
Responding on Thursday, Lavrov defended Russian military assistance to Syria, saying Moscow wanted to avoid a repeat of the “Libyan scenario” in Syria and would therefore provide greater military assistance to the Syrian president if requested.
“We helped, are continuing to help and will help the Syrian government when it comes to supplying the Syrian army with everything it needs,” he said.

Should the UK bomb Syria? If we want to make things far worse for everyone

Nick Witney
Read more
Lavrov has said that Russian aircraft flying into Syria have been delivering military supplies and humanitarian aid.
“The planes the Russian Federation is sending to Syria are carrying military items, in accordance with the contracts we have, and humanitarian aid,” he said.
“Depending on what cargo the plane is carrying, we request the proper clearance, in full accordance with international law.”
Russia has also reportedly been seeking permissions to use military airspace through Iran. Bulgaria refused permission for its airspace to be used for Russian military traffic seeking to fly to Syria.
Kerry told Lavrov on Wednesday that if the reports were found to be true “it could lead to greater violence” – a message reinforced by the foreign ministries of Germany and France.
The claims of an expanding role for Russia in Syria have come as Assad’s forces suffered a series of setbacks, including the loss of a key airfield.
Moscow has backed Assad throughout the nation’s civil war, which has killed more than 250,000 people. Vladimir Putin, the Russian president, has sought to cast arms supplies to Assad’s government as part of international efforts to combat Islamic State (Isis) and other militant organisations in Syria. 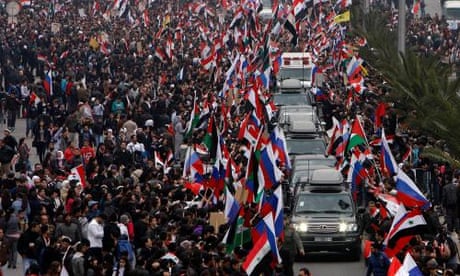 Russia complains of 'strange hysteria' over its presence in Syria

Read more
On Wednesday three unnamed Lebanese officials told Reuters that a small number of Russian advisers were already participating in military operations in Syria in support of regime forces.
Ya’alon described the Russian move as “significant,” and said if the Russians plan on carrying out airstrikes against Isis militants, they would have to coordinate it with a US-led campaign.
The Israeli minister added that Russia’s first goal is likely to protect its interests in Syria, namely the navy base of Tartus on the Mediterranean Sea. Ya’alon did not elaborate on how Israel knew of the Russian deployment in Syria.
In Moscow, Putin recently hinted that Russia might be planning to expand its assistance to Assad.
Asked if Russia could deploy its troops to Syria to help fight Isis, Putin said last week that Russia was “looking at various options” but it was too early to talk about it. Dmitry Peskov, Putin’s spokesman, said on Thursday that nothing had changed and Putin’s comments still stood.
Posted by Tony at 11:30 AM