Syrian refugees in Hungary: 'This is the so-called developed Europe?'

Thousands forced to camp in cold, muddy field after crossing into country from Serbia 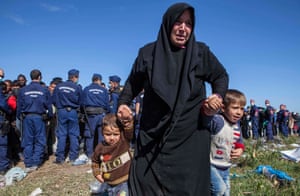 Refugees at Röszke on the Hungary-Serbia border. Photograph: Antonio Olmos for the Guardian
In a field 500 metres north of Hungary’s border with Serbia, Mouti, a 50-year-old oil engineer, points at the muddy field around him. Several hundred mostly Syrian refugees have been camped here overnight, surrounded by a thin blue circle of Hungarian policemen. They’ve slept in the cold, if they’ve slept at all. A man lies unconscious, roused only by a splash of water. Mothers rock their babies, looking miserable.
“This is the so-called developed Europe?” asks Mouti. “It’s supposed to be different to the fucking Arab world.”
After the euphoria of Germany welcoming a few thousand refugees who had travelled from Hungary over the weekend, reality has bitten. Just as thousands left Hungary by its north-western border, thousands more refugees are arriving by its southern one. And many of them are being forced to camp in this field, while the Hungarian authorities wait for space in reception centres across the country. 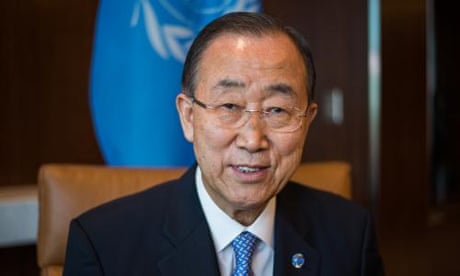 Read more
Mouti and his friend Fadi, an auditor, have come from Deir Ezzor, a town contested by Islamic State and the Syrian regime. “Both of them are bombing each other,” he says, “and we were stuck in the middle.”
Twenty-five days later, they have arrived in the EU – but it doesn’t feel much better. They are surrounded by a line of policemen and their eight children are getting sick. Fadi’s brood includes an eight-month-old son, and two boys aged four and five. They all have colds after being forced to stay here overnight.
“We’re coming from Daesh,” says Fadi, using the pejorative Arab term for Isis, “and this is how Europe treats us?”
To underline the point, a group of protesting refugees have held up a sign that reads “Daesh = Hungary”, and some of them are chanting: “Freedom”. It’s just like the situation in Syria, smiles Shoukry, a steelworker from Aleppo. Even in such a depressing situation, there is time for a bit of gallows humour.
More seriously, the scene is a symbol of Europe’s confused response to the continent’s biggest wave of mass-migration since the second world war. On a local level, the Hungarians have given up trying to stop people crossing the border, despite the construction of a razor-wire fence along its perimeter and constant anti-immigrant statements from its government. They are allowing a steady stream of refugees to walk across the border through a nearby gap in the fence. For all their rhetoric, the Hungarians appear to have quietly recognised – for now – the futility of attempting to stop the unstoppable.
They are even allowing the most mobile refugees to disappear into the Hungarian countryside after they cross the border, with smugglers doing a steady trade at a petrol station a mile from the border crossing. But most families are being spotted, and then later siphoned into the field. 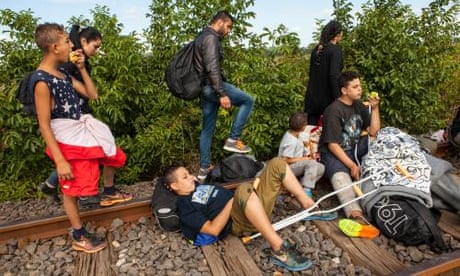 Read more
The scene highlighted how Germany’s recent generosity will not alone be enough to deal with a steady flow of refugees that is likely to continue until mid-October, when the weather in the Aegean sea makes the crossing between Turkey and Greece more dangerous. Although Germany welcomed a few thousand from Hungary over the weekend, there could be at this moment up to 50,000 making their way to Hungary from the Greek islands, based on the latest estimates of refugees in each of the countries on the Balkan route. In a week’s time, most of those 50,000 will have been replaced by a similar number of new refugees. Several thousand are reportedly at the Macedonian border, and the International Rescue Committee says up to 25,000 are on the island of Lesbos.
It is an fact not lost on those at the Hungarian border, where Mouti called on other European countries to step up their response. “Right now it’s just one country – Germany,” said Mouti. “Where are the others? It’s only Germany. OnlyMerkel.”
Posted by Tony at 7:47 AM