Munich mayor: I don't think about numbers, only refugees' safety

Southern German city has become a gateway for people arriving via Austria from Hungary and expects to have received 10,000 this weekend

I really have great admiration and affection for the German and Austrian people. By their generosity, love and compassion they have set the example for what should be done to help the refugees.

They did not talk numbers, politics, cause and effect, religion, etc. They are faced with a tidal wave of human suffering and they are doing their best to help.

Will the Arab people learn and do their share for their fellow Arabs? I somehow doubt that this will happen. Only an empowered (not subdued and terrorized by brutal dictators) citizenry can do that. The Arabs are a few generations away from that. 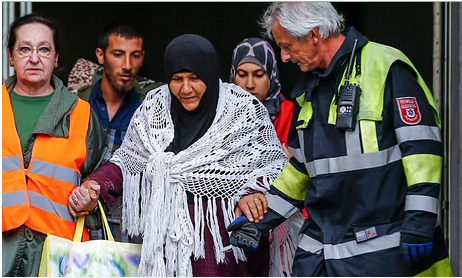 Germany is not asking how many refugees it can afford to shelter, but how it can make the new arrivals feel safe at last, the mayor of Munich said as the city prepared to register thousands of people on Sunday.
Munich expects to receive about 10,000 people this weekend alone. Cheering crowds greeted the new arrivals and handed out toys and chocolate as they filed off trains and into tents for basic medical checks.
They are then taken by bus to conference centres, school halls and other large spaces that have been pressed into service as temporary housing centres, part of a complex system for managing the influx set up almost overnight.

Germany’s response to the refugee crisis is admirable. But I fear it cannot last


Read more
Dieter Reiter said he was surprised at how effectively his city had responded to the crisis.
The mayor said: “Of course there are some limits responding given the space we have in Munich but that is not the question I am asking myself.”
“Every day I am asking myself how can we accommodate these people, these refugees, how can we give them a feeling that they are safe here in Munich, here in Germany. I am not really thinking about how many people can we afford and can we take here in Munich. That is not the question,” he told journalists at a news conference.
On Saturday 6,780 people arrived in Munich on trains, many of them from the large group that had set off to walk from Budapest after days stranded at a train station in the Hungarian capital. After a long day’s march, most were picked up by buses and taken to the border, but many arrived exhausted and ill.
Perhaps the most critical new arrival was a baby born prematurely on the concourse at Keleti station on Tuesday,” said Stephanie Jacobs, the local government health minister. She arrived with her umbilical cord still attached, and needed urgent medical care.


“She is now in an incubator, and doing well given the circumstances,” Jacobs said.
The city is expecting another 4,000 people to arrive on Sunday. The first 1,200 came in the early hours of the morning, but their trains were diverted straight away to other German cities, including Frankfurt, to ease the pressure on Munich.
There were so many well-wishers at Munich’s station that police had to push back barricades to give those arriving more space, and volunteers were turning away people with clothes to donate away.
“We don’t have the capacity to handle them at the moment. Please could you check on the internet for places that can sort donations,” said one of the volunteers helping coordinate the arrivals. About 600 people have signed up, and many more would have liked to.
Annabel Parker delayed her 16th birthday celebrations to come to the station and hand out toys with her mother and sisters.

Full coverage of the worst refugee crisis to hit Europe since the second world war, as thousands of refugees arrive in Germany


Read more
“I saw the reports on the news and wanted to help,” she said. The Parkers live in a rural area about 45 minutes by train from Munich that has seen an unprecedented outpouring of solidarity.

About 80 people have been put up temporarily in the school gym in the neighbouring village, and locals are volunteering to help with everything from food to negotiating Germany’s notorious bureaucracy.
“It’s a privilege to help people fleeing a war. We live in a very rich part of Europe,” said Parker’s mother Jane, a Briton who has lived in the area for nearly 20 years. A language teacher, she is also thinking of signing up to help refugees housed in the area learn German.
Many of those at Munich station are proud that their country is taking in people ignored or shunned by other European countries.
“I think maybe Germany should act as a role model for other nations,” said Robert Bogner, heading to the station with a welcome poster. “These people have left enough behind.”
Posted by Tony at 8:15 PM