Media interest in Isis has overshadowed the humanitarian catastrophe occurring at the hands of pro-Assad forces. The Syrian conflct is more complex than good v evil


Horrific images and stories of starving children have suddenly flooded the media as the reality of life in the town of Madaya in Syria, besieged by Syrian regime sources and Hezbollah, has surfaced. But what is perhaps more shocking than the images is how the deliberate targeting of the population of Madaya has been taking place since July 2015 without the international community noticing.
This is despite activists in Madaya desperately trying to direct global attention to the atrocities committed there by the Syrian regime and its ally Hezbollah. It is only when the situation in Madaya reached the level of mass starvation that the international media have paid attention. 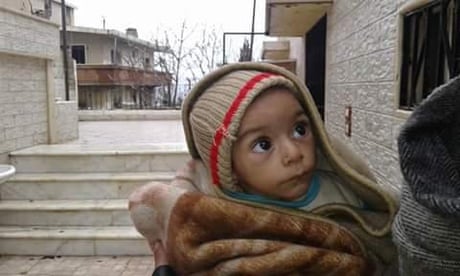 Madaya: residents of besieged Syrian town say they are being starved to death

Read more
The Syrian regime and Hezbollah have put Madaya under siege for more than six months now as a response to the siege of the northern towns of Fua and Kefraya by anti-regime forces. In besieging Madaya and neighbouring Zabadani on the Lebanese border, the regime is trying to pressure its rebel opponents to agree to a population transfer between the two sets of towns that would consolidate regime control over Syrian towns bordering Lebanon. The regime’s plan is to empty Zabadani and Madaya from Sunni residents and populate them with Shia who would be brought in from Fua and Kefraya. This “sectarian cleansing” would allow the Shia Hezbollah to consolidate its control over areas serving as supply lines for regime strongholds in Damascus and the Syrian coast (the Sahel) as well as for Hezbollah itself.
Madaya is not the only town in Syria being starved by the regime. And its population is not unique in enduring regime barrel bombing and other atrocities. But the humanitarian catastrophes in Syria have been overshadowed by stories about Islamic State. Much media attention is directed at Isis activities both in Syria and worldwide, while the conditions of life in Syria in areas beyond Isis territories are relatively ignored, especially in the western media.
One reason for this selective attention is that Isis is now a global problem. It has many Europeans in its ranks, and has engaged in attacks in the west. As such, Isis has become closer to being considered “our problem” by the west, while the wider problems faced by Syrians are relegated to the status of issues “far away”.

Isis is also a recognisable evil. It is an entity on which there is agreement by states around the world, probably all of whom consider it a terrorist organisation. Its mode of operation, based on severe violence, may be an upgraded form of what groups such as al-Qaida engage in but it is ultimately familiar. It also fits within the type of “evil” stemming from the Middle East that the western media have been covering for decades – violent Islamic extremism. It is much more comfortable to fall back on familiar tropes that require little explanation than to explore the nuances of a different type of oppression, such as a brutal regime engaged in mass slaughter and starvation of its own populations, especially when this regime tries to sell itself as the best guarantee against extremism in Syria.
And here lies the heart of the issue, which is that the Syrian conflict is proving to be too complicated for a media landscape with a short attention span, and for global audiences with little background in the current affairs and history of the Middle East. It is also a conflict that has been going on for almost five years, generating media fatigue.
What is needed is not spontaneous panic that highlights crises then promptly dies down, but sustained, active focus on the multiple dimensions of the conflict beyond the problem of Isis, and a commitment to seeking to report facts that take us out of our comfort zone.
Posted by Tony at 7:46 AM