Emirati fighter pilots are taking part in an international operation also involving British, French and US forces in support of renegade Libyan General Khalifa Haftar against rival militia groups in eastern Libya, leaked air traffic control recordings obtained by Middle East Eye reveal.
MEE has previously reported on the presence of UAE personnel in an international operations room at the Benina air base in Haftar-controlled Benghazi but the new tapes offer the first confirmation of the presence of the Gulf state’s pilots in the skies over Libya as well.
In one audio file an Emirati pilot is heard relaying coordinates to a Libyan officer in the operations room. He is then told to “check for movement” because they "don't want to waste any bombs”.
The exclusive comes as Haftar’s forces were reported on Monday to have seized a third oil terminal in the east of the country on behalf of the Tobruk-based House of Representatives (HoR), a rival administration to the UN-backed Government of National Accord (GNA) in Tripoli.
The advance by Haftar’s forces was condemned by the US, France, the UK, Germany, Italy and Spain in a statement calling for an immediate ceasefire.
Yet pilots and air traffic controllers speaking in Arabic and American-, British-, French- and Italian-accented English can be heard in the latest batch of tapes, confirming the international nature of the air operation in support of Haftar’s campaign to gain control of eastern Libya from groups he has declared to be “extremists”.
In July, MEE revealed the involvement of US and British pilots in the operation but the latest batch of recordings shed more light on the UAE’s involvement, with Emirati pilots using the call signs Hassan, Shihab 11, and Shihab, 12. 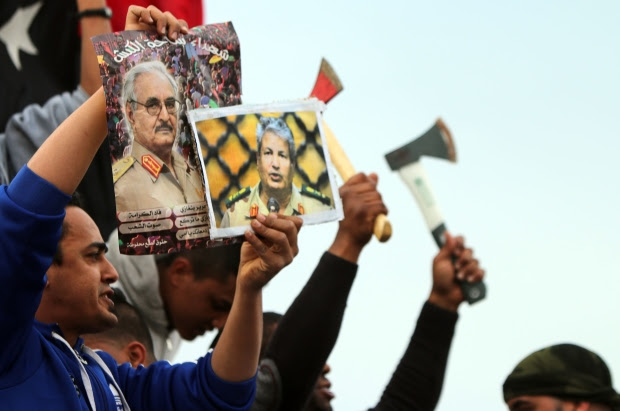 A Libyan man holds a picture depicting a portrait of Haftar in a demonstration marking the fifth anniversary of the Libyan revolution in Benghazi, 17 February, 2016 (AFP)
In one audio file an Emirati pilot is guided to a “target.”
“Your entry is going to be at the front which is going to be just as you go right again, go right… ok… stay on that target, stand by for update,” he is told by the operations room.
The Emirati pilot is then heard relaying coordinates to a Libyan officer in the operations room, before being told: “Stay on the target and let’s just check it out because we don’t want to waste any bombs for any movement on that target… check for any movement, if there’s no movement then we’re not going.”
Another conversation then takes place between the two men in which the pilot relays fresh coordinates.
In another audio file an Emirati pilot is heard asking for permission to land at Benina, which is considered to be Haftar's most important military facility.
Many of these files sound like routine air traffic control room communications – numbers, call signs, complaints about malfunctioning radios and back-and-forth confirmations.
But by piecing together certain details, such as the temperature measurements read aloud in the leaks, MEE believes the flights took place between March and early May this year between 2200 and 0500 hours.
Frequent trips are also made to and from LGSA – a NATO airbase on the island of Chania, Greece, north of Libya.
In July, MEE revealed how air strikes in support of Haftar had targeted a fish market in Benghazi and a group called the Shura Council of Benghazi Revolutionaries (SCBR), an amalgamation of several Islamist and militant organisations.
But the group is not aligned with the Islamic State (IS) group and the air campaign being run out of Benina appears to be primarily directed at Haftar’s rivals, rather than at IS which holds territory in central Libya.
The UAE has long been suspected of carrying out military operations in Libya as part of its increasingly interventionist foreign policy in the wider Middle East.

“It comes as no surprise to me because the UAE has already conducted ai rstrikes in Libya in Tripoli in 2014,” said Libya specialist Mattia Toaldo, a senior policy fellow at the European Council on Foreign Relations. “There were several rumours about the air strikes carried out in Ganfouda in Benghazi recently.”
In August 2014, the UAE was accused of bombing Tripoli and killing at least 18 militants battling for control of the capital’s airport. The UAE feigned surprise, but it is believed the attack was launched from an Egyptian military base in Siwa, a desert oasis close to the Egyptian border with Libya.
“Emirati involvement has always been high, both in warfare and in providing weapons,” Toaldo said.
The UAE have been busy arming themselves in recent years. Between 2006 and 2010, the UAE imported 3.9 per cent of the world’s arms – a figure that increased to 4.6 per cent between 2011 and 2015. Last year, the UAE made up 8 per cent of total US arms exports.
Last April, the UAE donated a number of armoured personnel carriers to the Tobruk-based HOR government and its military wing, the Libyan National Army that Haftar leads.
Haftar was a key military figure in Gaddafi's army, but was exiled to the US and returned during the 2011 revolution to try to oust the long-time leader. He has been accused of having links to the CIA, of having presidential ambitions and, according to the Economist, is "often considered a spoiler of efforts to unify the country".
“He’s a figure that’s extremely divisive and unlikely to be palatable to any groups around the negotiating table for a unified Libya,” Christopher Davidson, author of After the Sheikhs: The Coming Collapse of the Gulf Monarchies and reader in Middle East politics at Durham University, said of Haftar. “As far as the United Arab Emirates is concerned that therefore is the ideal kind of figure to be backing.” 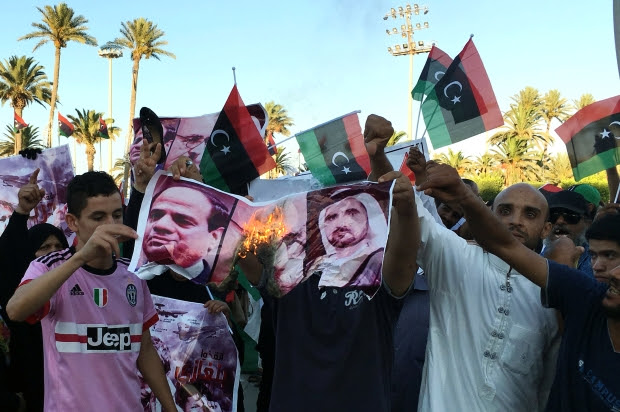 Libyans wave their national flag and burn portraits of Egyptian Sisi and Dubai Shiekh Mohamed Bin Rashid al-Maktoum during an anti-Haftar protest in Tripoli on 5 August, 2016 (AFP)
The repeated audio leaks are especially damaging for the international parties involved because of Haftar’s refusal to support the UN-backed unity government in Tripoli and because he has been fighting groups that are not IS, nor even IS-aligned.
Just as IS has exploited the chaotic situation to bolster its presence inside Libya – turning Gaddafi’s home city Sirte into a training camp for its militants - Haftar appears to have exploited concerns about IS to secure foreign backing.
Two years ago, Haftar launched Operation Dignity, centred primarily around Benghazi. He subsequently allied with the HOR government, but despite his claims to have "liberated" Benghazi earlier in 2016, violence has continued to rage.
Since Operation Dignity was launched, there have been numerous reports that he receives support from foreign powers, notably Egypt and the UAE, which are thought to be responsible for night-time air strikes on sites controlled by Islamist-aligned forces.

Davidson told MEE: “We have to careful not to fall into the trap of assuming states like the United Arab Emirates, and Qatar for that matter, are pursuing independent foreign policies of their own… these are key US allies in the region.”
He claimed that a unified national Libyan government wouldn’t necessarily be in US interests, saying a strong central government “may for example not open up its economy and its oil in a way the United States wants it to.”
“Much better if a pro-Western government can’t form in Tripoli is perhaps a more fragmented state, and that’s perhaps why we’re seeing on the ground partners like Haftar, with his ground forces, and in the air partners like the United  Arab Emirates, essentially carving out a sort of ultimately pro-US enclave in eastern Libya,” Davidson said.
Toaldo disagreed completely, saying that “especially for the US and some European countries their credibility is on the line and if the UN-backed government fails, it is also a failure for their policy.”
Davidson downplayed the inter-Gulf rivalry in Libya between UAE and Qatar, saying “far too much is made of this in terms of these are independent states and they have been backing different sides.” 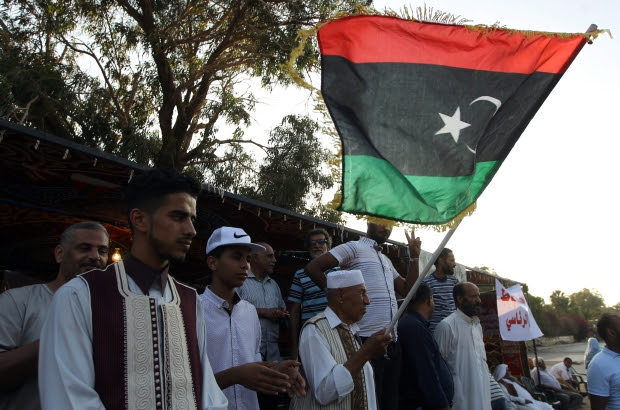 A Libyan protestor waves his national flag during a pro-Haftar demonstration in Benghazi on 5 August, 2016 (AFP)
“We’ve got two reactionary, counter-revolutionary camps in the region,” he said. “In Libya’s case of course we’ve got a very living, breathing example of this where we’ve got two of the US-backed allies serving as regional proxies on different sides of the same conflict. But both of course ultimately undermining a proper cohesive Libyan state that could represent all peoples in the country.”
The other US-backed ally Davidson was referring to was Qatar, but Toaldo thinks there is a clear asymmetry in Qatar and the UAE’s involvement in Libya.
“Qatar has been delivering some weapons to the other side, but its role cannot be compared to the Emirati or Egyptian role on Haftar’s side. One usually draws the symmetry that one side is supported by Egypt and the UAE, and the other side by Turkey and Qatar.
“But there is no such symmetry, we haven’t seen shiploads full of weapons for Qatar’s allies in Libya while we have seen shiploads full of weapons for Haftar coming from the UAE and Egypt,” Toaldo said. “There is no parallel with Qatar or with Turkey.”
As an example of the UAE’s deep involvement in Libya, both experts pointed to the scandal involving the UN’s envoy to Libya, Bernardino Leon. Last year, the envoy had corresponded in secret with Abu Dhabi while attempting to negotiate an end Libya’s civil war, with the leaked emails showing he was taking the Emirati position despite his role demanding neutrality.
The Guardian also reported that Leon was also due to begin a new $46,000 per month job directing the Emirates Diplomatic Academy at around the same time.
“They’re very much playing a spoiler role in the formation of a Libyan state, as far as I can see,” Davidson said of the UAE’s involvement in Libya.
Posted by Tony at 7:22 AM