The Syrian government is failing to provide letters of permission to allow UN aid convoys to travel to besieged cities, in clear breach of the US-Russian ceasefire agreement, the UN special envoy for Syria has said. 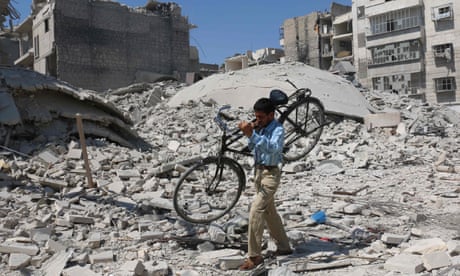 Read more
Staffan de Mistura also said the intended delivery of aid into eastern Aleppo, subject to a different permission regime, was also being blocked by hurdles put in place by the Syrian government and opposition fighters.
The delivery of aid is a precondition of the survival of a cessation of hostilities that came into effect on Monday and is designed to lead to unprecedented joint Russian-American action against terror groups inside Syria.
De Mistura insisted the Russians were as disappointed as the UN at the “deeply regrettable” refusal of the Syrian government to grant letters of permission in line with the agreement. He said he had been given fresh assurances by the Russians at a meeting on Thursday morning that the absence of the permission letters was a very severe disappointment, but he did not specify what pressure the Russians were placing on the Syrians to abide by the agreement.
Hundreds of trucks were ready to be loaded, he said, and an opportunity to deliver aid and help solidify the ceasefire was being wasted. The UN has said it cannot cross front lines or checkpoints without Syrian permission.

Everything you need to know about the ceasefire agreed between Russia and the US that is due to start at sunset on Monday
Read more
The separate blockage over eastern Aleppo has left 20 UN trucks that travelled from Turkey into a buffer zone waiting for the past 48 hours for UN agreement that it is safe to travel along the Castello Road, the main supply route into the divided city, where 250,000 people are desperate for food and fuel.
Jan Egeland, head of the United Nations humanitarian taskforce for Syria, said the trucks were still in the buffer zone and “could go on a minute’s notice”. De Mistura said the aid could not move into Syria’s second city before the Castello Road route had been fully secured.
The Russian-American agreement states trucks should be allowed to travel into eastern Aleppo without the need for written permission from the Syrian government. The Syrian government involvement is limited to being informed of the details of the aid being delivered, and details of what had been delivered.
In addition, as part of the agreement, regime checkpoints on the Castello Road should be withdrawn, and opposition forces inside the city’s east should not seek to block the delivery. “The trucks are ready and sealed, and the agreement is that once they move they will not be harassed and they will not be investigated and they will be moving along that road,” De Mistura said.
There have been reports that some opposition fighters are rejecting the delivery of the aid on the basis that it rejects the terms of the broader Russian-American agreement, including the plan to target fighters from the former al-Nusra front. The US says al-Nusra is linked to al-Qaida and is a legitimate target alongside Islamic State. But other groups in eastern Aleppo are reluctant to abandon al-Nusra.
Under the ceasefire plan the Russian and Americans are supposed to create a joint centre to agree legitimate targets to attack by air. The Syrian air force would then in effect be grounded in those specified areas.
Despite the problems, De Mistura insisted the Russian-American agreement “is and remains a potential game-changer”. He said it was too much to describe it as a cessation of hostilities, saying instead it had produced a reduction of violence, adding that “by and large it is holding and is, in fact, substantial”.
Posted by Tony at 7:18 AM