Twenty trucks are not being allowed to enter the beseiged city in spite of ceasefire agreement, says United Nations envoy


Even though eastern Aleppo is desperately short of food and fuel, the UN supply convoy has not been allowed to move. Photograph: Uncredited/AP
Link


The first serious hurdle since a ceasefire in Syria came into effect on Monday has emerged after the UN said the regime was not giving permission to allow 20 UN aid trucks into eastern Aleppo.
UN special envoy Staffan de Mistura said the ceasefire agreement signed last week clearly stated that the government should simply be notified of aid entering the city.
As many as 20 trucks are ready to move and the agreed procedure is that the government is given details of the content of the trucks. Syrian government permission or inspections by its officials should not be required.
De Mistura said “the trucks are not moving” and implied the Syrian government was in breach of the agreement by refusing to allow unhindered access. “We need to do more homework,” said de Mistura.
He urged the eastern Aleppo council to drop any preconditions for the delivery of the aid. Nevertheless, he claimed the first 24 hours of the ceasefire had seen a significant drop in violence. “Calm has prevailed,” he said. 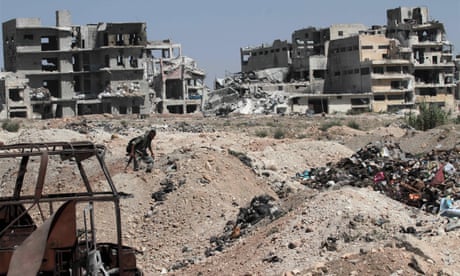 Read more
His remarks will be taken as a coded warning to the Russians to use their influence with the Syrian government to allow the aid trucks into eastern Aleppo on the terms agreed last week after marathon talks between Russia and the US in Geneva.
De Mistura insisted the process for eastern Aleppo was different from the rest of Syria where formal letters of authorisation are required before aid can be delivered. For months, the UN has faced a daily battle to wrest such permissions from the government in a bid to lift the sieges of Syrian towns.
In a statement, the Syrian government warned it would not allow Turkish humanitarian aid into the besieged city of Aleppo without its permission.
At the same time, opposition groups objected to the Russian presence along the Castello Road, the main supply route into the divided city, where 250,000 people are desperate for food and fuel. Under the agreement, the Russians are supposed to take over some of the checkpoints on the Castello Road.
De Mistura said the council should drop its preconditions for aid delivery.
A senior US official said neither Syrian government nor Kurdish opposition forces had pulled back from the Castello Road route into eastern Aleppo and that Washington was doing all it could to ensure the UN convoy safe access.
“We have spent much of today pressing the Russians and, through the Russians, pressing the regime. The UN wanted to make sure the trucks go through unhindered by the regime and unthreatened by the opposition. And we hope to get that done today,” he said.
“If an opposition group decides it doesn’t want to part of the cessation and wants to carry out attacks on the regime, then they take themselves out of the cessation of hostilities.”
Earlier, Russia claimed it was abiding by the ceasefire along with the Syrian government, but said the US government was not acting to rein in its client groups, citing 23 different violations of the terms of the ceasefire.
“Syrian government troops have completely stopped firing, with the exception of areas where Islamic State and Al-Nusra fighters are active,” said senior Russian military officer Viktor Poznikhir in a televised briefing.
“Unfortunately, the same cannot be said for armed units of the moderate opposition controlled by the US. After the start of the cessation of hostilities by this morning, 23 instances of firing on residential areas and government positions were registered.”
The ceasefire agreement for Syria, hammered out between Moscow and Washington, came into force on Monday evening. If it holds for seven days, it is designed to lead to unprecedented joint operations by Russia and the US against the twin targets of Islamic State and the Jabhat Fateh al-Sham terrorist group, formerly known as al-Nusra Front. The Syrian government air force would be grounded and debarred from attacking Al-Nusra, the US government insists.
Seeking to address confusion over the role of the Syrian air force under the US-Russian deal, another senior US official said: “For the time being, until we get seven continuous days of reduced violence, the only legitimate targets for anyone– Syrian, Russia or the US – are Nusra and Isil [Islamic State]. After that seven days, when the joint implementation centre [JIC] has been established, the regime air force will no longer be able to hit Nusra Front or opposition areas.”
But he noted that the regime had previously conducted airstrikes against other opposition groups or civilians under the pretext of targeting the Nusra Front. “We do need seven days of reduced violence. If that happens again during this period, we will not get to the JIC.”
As many as 20 opposition groups have said they will not accept the ceasefire, claiming there is no clear mechanism for punishing breaches. Some are wary of breaking with the former al-Nusra group.
But Anas al-Abdah, the president of the Syrian National Coalition, speaking in London, said he believed the ceasefire would be accepted by most rebel groups.
He said: “I think all our troops will go away from Nusra especially in seven days’ time because then Russia and the US [will be] co-operating and Nusra becomes a target like Isis. So our advice to all the troops on the ground is that they make sure they stay away from Nusra as soon as possible.”
In televised briefings from various locations around war-torn Syria, Russian military observers said that rebel violations had taken place in the provinces around Aleppo, Latakia, Damascus, Hama, Idlib and Daraa.
A Russian military officer said that “new violations” had also occurred around the ravaged city of Aleppo during the day.
As the televised briefing cut to a military monitor by the key Castello Road into Aleppo, which has been under Syria regime control, gunfire broke out and the Russian officer dived for cover.
Posted by Tony at 7:25 AM