Chaos in the White House: 'There's never been anything like this'

After the fastest, most furious week yet for the Trump administration, America’s elder statesmen say they have never seen such turmoil or ineptitude

When press officers at the White House glance up from their desks, they are constantly reminded of their boss’s big day. On the wall, in thick dark frames, are photos: Donald Trump taking the oath of office, giving a thumbs up at his inaugural address, bidding farewell to Barack Obama, waving to the crowd during his inaugural parade, dancing with his wife at an inaugural ball.
Walking by last Monday, Trump gestured towards an image of his inauguration crowd – a point that still irks him – and told reporters there would soon be an official statement about the future of his national security adviser, Michael Flynn.
Trouble was, an hour earlier, his adviser Kellyanne Conway had appeared on television declaring that the president had “full confidence” in Flynn. Soon after, Trump’s press secretary, Sean Spicer, read a statement that said “the president is evaluating the situation”. Six hours later, Flynn was gone.
It was the fastest, most furious week yet for an administration that, like a runaway train, has Washington and America’s elder statesmen shaking their heads, declaring that they have never seen such turmoil or ineptitude.
“Our government continues to be in unbelievable turmoil,” Gen Tony Thomas, head of the military’s special operations command, told a conference last week. “I hope they sort it out soon because we’re a nation at war.”

Our government continues to be in unbelievable turmoil. I hope they sort it out soon because we’re a nation at war


Some of the malaise can be attributed to the growing pains that plague any new administration. Some is said to be down to the factional struggles, imported to the White House from Trump’s businesses. And much is believed to be on the shoulders of the capricious, egocentric, volatile president, the first in US history to have been elected with no political or military experience.
Yet both Trump and his supporters deny the dysfunction, pointing to executive orders, a supreme court nomination and the scrapping of a Pacific trade deal at breakneck speed.
“Don’t believe the main stream (fake news) media,” Trump tweeted Saturday morning. “The White House is running VERY WELL. I inherited a MESS and am in the process of fixing it.”
Sleeping just four or five hours a night, Trump has operated at a manic pace that has made the world’s collective head spin. He had an angry phone call with the prime minister of Australia, had a Twitter spat that convinced the president of Mexico to cancel a meeting, and consulted the prime minister of Japan about a North Korean missile launch in full view of dinner guests at his Florida country club, Mar-a-Lago. He approved, over dinner, a commando raid in Yemen that resulted in the death of a navy Seal and an eight-year-old girl. 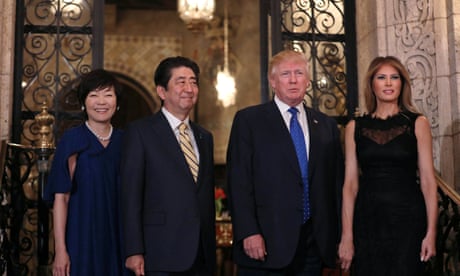 Read more
At home, he was caught on live television making a false claim about his electoral victory, press releases have been littered with spelling mistakes, and the president has fought Twitter battles with everyone from senators to Arnold Schwarzenegger to a department store that dropped his daughter’s products.
Then there were the White House contradictions around the abrupt departure of Flynn, who misled the vice-president over his conversations with the Russian ambassador. Then Trump’s pick for labour secretary, Andrew Puzder, withdrew his nomination after facing questions over his personal background and business record.
Not even in his fourth week, there was the president’s ban on travelers from seven Muslim-majority countries, an order widely denounced and sowing disarray and demonstrations at airports. Trump sacked his acting attorney general for refusing to defend the ban, attacked the courts for pausing it to weigh its lawfulness, and insisted this week that it was “a very smooth rollout”.
“This administration is running like a fine-tuned machine,” he said at a rambling, impromptu press conference.
That characterisation has provoked scorn. “From what I can tell, it’s non-functional,” said Rick Tyler, a political analyst. “It’s not firing on all cylinders, and the timing is off, and the transmission won’t engage.”


The executive order, Tyler noted, “created havoc and turmoil. The communications team are incoherent, inconsistent and contradictory to what the president says.”

Read more
Bob Shrum, a Democratic consultant and strategist, called the president’s defenses “preposterous”. “It’s like a car where none of the gears work and you’ve no idea if you’re going at 90mph or 30mph and you’re just careening. It doesn’t remotely compare with anything I can think of. There’s never been anything like this.”
One Republican with ties to the White House blamed growing pains, from Trump’s lean campaign to the staff of the federal bureaucracy.
The Trump administration has also decided to vet potential members for any criticism of the president during the campaign. On Thursday, a political appointee at the Department of Housing and Urban Development was fired after it was noticed that he had written a critical opinion column about Trump in October.
But operations have also been hampered by competing interests and seething mutual suspicion. Media reports describe paranoid staff using a secret chat app that erases messages as soon as they are read. Trump’s inner circle includes Conway; chief of staff Reince Priebus; senior advisers Trump’s son-in-law, Jared Kushner, 36, and Stephen Miller, 31; and chief strategist Stephen Bannon, the former Goldman Sachs executive who has likened himself to Thomas Cromwell in the court of Henry VIII.
Senator John McCain, the Republican nominee for president in 2008, told reporters this week that the “whole environment is one of dysfunction in the Trump administration”.
“Who’s making the decisions in the White House? Is it the 31-year-old? Is it Mr Bannon? Is it the chairman of the joint chiefs of staff? I don’t know.”


The default answer could still be Priebus, who, as chief of staff, would traditionally act as gatekeeper to Trump. But his boss is anything but traditional, and Priebus’s establishment influence is countered by two ideologues, Bannon and Miller. Bannon, previously head of the rightwing Breitbart News, has been described by Democrats as a white nationalist and is seen by many as the true power behind the throne.
Last week, Bannon and Priebus gave a joint media interview to deny rumours of a rift. But Tyler said: “There’s no clear chain of command. They can’t tell who’s in charge.
Were the chief of staff in control, Tyler said, Priebus would have fired Flynn. “If Priebus and Bannon are doing PR to show how well they got on, that shows Priebus is losing. He is the chief of staff, so he shouldn’t need to say he’s meeting with Bannon, who ought to be a subordinate.”
Bannon’s allies, meanwhile, continue to rise in prominence. Sebastian Gorka, a deputy assistant and former editor for Breitbart, has become a vocal surrogate in a series of TV and radio interviews, telling the BBC this week that Trump’s press conference performance was “fabulous”.
Miller, too, earned Trump’s praise and widespread scorn for his zealous defense of the president and for peddling a baseless claim about phantom illegal voting. “He says things that would make movie villains blush,” Tyler said. “You could not script this stuff.”

He says things that would make movie villains blush. You could not script this stuff


The problems have been amplified by Senate Democrats doing their utmost to drag out the confirmation process on many of Trump cabinet choices, leaving many executive agencies with few senior staffers.
Trump is not the first president to hit early turbulence, and Bill Galston, a former adviser to Bill Clinton, recalled that “hardly anyone” of the new president’s staff in 1993 had been in the White House before.
“That created all sorts of problems. The simple fact of not knowing how the machinery operates is already a huge problem.”
Before too long, he said, Clinton recruited the Hill veteran Leon Panetta and David Gergen, who had worked with the administrations of Richard Nixon, Gerald Ford and Ronald Reagan.
“You need people there who know how overwhelming it is to be in the White House with ‘incoming’ coming at you from all directions,” Galston said. “You need to have a sense of all pieces of the government. It’s not as harmonious as conducting an orchestra. It’s like juggling knives and swords.”
But Galston, a senior fellow at the Brookings Institution thinktank, acknowledged that the Trump administration was not normal. “I’ve consulted many people in town about analogies and comparisons and nobody can come up with any. Our seismographs are broken.
“We appear to have a president who cannot distinguish chaos from order,” he continued. “There are amateurs doing a job that only professionals can do, and even then often not successfully.”
In contrast, Trump’s allies contend that, for a non-politician learning on the job, he is doing well and playing the media like a fiddle. 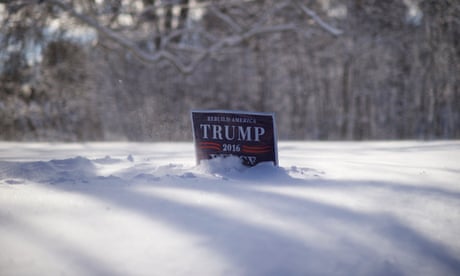 Read more
“It’s like the beginning of any administration,” said Christopher Nixon Cox, who is well acquainted with Bannon and other members of Trump’s inner circle. He compared Trump’s first month to Clinton’s, observing that critics also called those weeks “a disaster”.
“Every administration has its palace intrigues,” Nixon Cox said. “It’s hard to say he has any more or less. Given that we have social media and he’s a social media president, it could be we’re just more aware of what used to be kept behind closed doors. There will be good days and bad days but it’s way too early to say it’s going to go off the rails.”
Cox, a financial adviser and grandson of Richard Nixon, added: “Fundamentally, he’s going to be judged on the economy and whether he keeps peace around the world. I think it’s going to be a big success. We have to give him time.”
Tom Stewart, a member of Trump’s national security advisory council during the campaign, said that the president was “cunningly” manipulating the media, so that “his strong cabinet will have a chance to make some meaningful reforms”.
Grover Norquist, president of Americans for Tax Reform, said Republicans were making good progress on their conservative agenda. “The press and a lot of observers in Washington DC like to stop and look at a car accident and they miss that the traffic is continuing to drive past at 50mph,” he said. “Things are moving forward, largely on track.”
Nevertheless, as Trump enters his second month, there will be many praying for a steadier hand and fewer tweets ending with exclamation marks.
“This can’t just stand,” said Rich Galen, former press secretary to the 44th vice-president, Dan Quayle. “It was kind of fun in the beginning watching the kids run around and bump into each other. Now they’ve got the keys to the car and it’s dangerous. Someone has to go in and get their arms around this.”
Posted by Tony at 8:57 AM