The Middle East 'peace process' was a myth. Donald Trump ended it

"I’m looking at two-state and one-state, and I like the one that both parties like.” With these words at a joint press conference with Benjamin Netanyahu, Donald Trump may have finally dispelled the already receding mirage of any just solution.
Trump was clearly seeking to please his guest, spurred by the zealots in his government, four of whom, Public Safety Minister Gilad Erdan, Education Minister Naftali Bennett, Sports Minister Miri Regev, and Deputy Foreign Minister Tzipi Hotovley, just publicly came out against creation of a Palestinian state.
For decades, Israeli governments, pursuing the colonization of the entirety of “Eretz Israel,” have systematically destroyed the prerequisites for a solution involving a contiguous, sustainable, sovereign Palestinian state with Jerusalem as its capital. Nevertheless, the myth that a real Palestinian state is on offer, and that there actually is a genuine “peace process,” endures as one of the greatest examples of magical thinking in modern times. 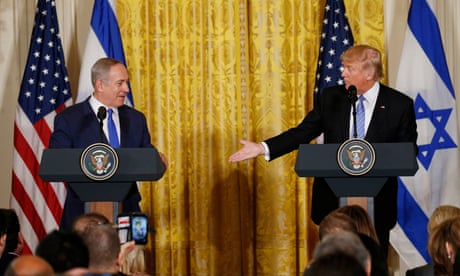 Read more
That myth has been crucial for the continuation of Israel’s permanent occupation and unending colonization of the West Bank and Arab East Jerusalem, shielding it from any serious international pressure.
The final interment of the already moribund “two-state solution” would force all concerned to face what is obvious to any honest observer. For decades, an imposed reality of one-state – the only sovereign entity enjoying total security control – has existed between the Jordan River and the Mediterranean. This one state is Israel. Irrespective of the label one uses for it, this is the only outcome that this Israeli government will accept, whatever subaltern, or helot, or “autonomous” status it deigns to allow the Palestinians.
Netanyahu did not mince words while standing next to Trump. He said that in any peace agreement “Israel must retain the overriding security control over the entire area west of the Jordan River.” He has long stated that he would only allow the Palestinians a “state minus;” that most Israeli settlements must remain in place; that all of Jerusalem belongs to Israel alone; and that Israel must keep 50-60% of the West Bank including the fertile Jordan River Valley. 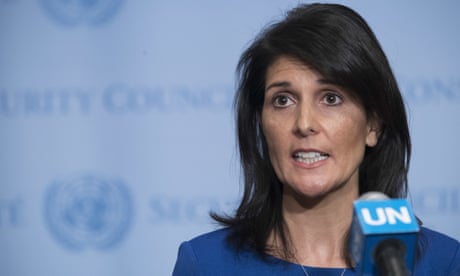 US ambassador to UN contradicts Trump's position on two-state solution

Read more
It matters little whether this travesty is called a one-state or a two-state “solution,” or whether the Palestinians get the right to fly a flag over such a pitiful Bantustan.
The Trump-Netanyahu press conference, and the Senate confirmation hearings for David Friedman as ambassador-designate to Israel, give us a very clear picture of how much the Israel-United States relationship has changed since January 20, 2017.
American presidents since Clinton have insisted on a Palestinian state, have condemned settlement expansion, and have tried to rein in the most egregious excesses of the Israeli government, while financing and defending at the UN the very activities they supposedly opposed. These feeble positions are now eroding.
Having just cast doubt on the two state solution, Trump stood by complaisantly while Netanyahu laid out preconditions universally recognized as deal-breakers for the Palestinians: besides permanent Israeli control of their “state,” he demanded recognition of Israel as a Jewish state, a designation that no other country is required to accept, and something Israeli itself has not formally adopted. Similarly, while Trump asked Israel to “hold back on settlements a little bit,” his administration has not responded to the massive settlement expansion announced by the Israeli government in recent weeks. 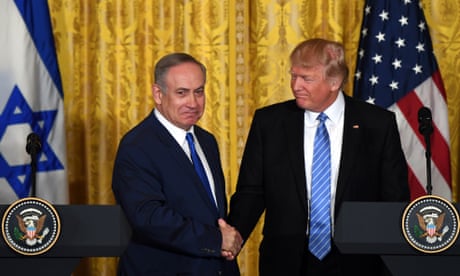 Read more
In Friedman’s prepared testimony, clearly scripted by Trump administration handlers, he aligned himself closely with the largely false claims made the previous day by Netanyahu: that the Palestinians have refused to recognize Israel, or to renounce terrorism, and that they pay killers of Israelis. In fact, the PLO recognized Israel and renounced violence decades ago.
The families of the 35,000 Palestinians killed by Israel since 1967 do receive compensation, including some who have engaged in violence against Israel and its military occupation, but that very total, many times larger than the number of Israeli soldiers, settlers and civilians killed, helps to explain the violence. This is the cost of an occupation whose very existence Netanyahu and Friedman deny.
As Netanyahu put it while standing alongside Trump: “Jews are called Jews because they come from Judea. This is our ancestral homeland. Jews are not foreign colonialists in Judea.” This is perfectly in line with the views of Friedman, who has raised millions of dollars in tax-free donations to settlements built on stolen Palestinian private property in “Judea.” Clearly, the Trump administration has moved the goalposts on Palestine, tilting even further in the direction of the most extreme government in Israel’s history.
In this brave new world, it is more urgent than ever for the Palestinians to overcome their crippling internal divisions, reject the pressures of the external powers that have helped to keep their national movement fragmented, and produce a clear strategy for a future of complete equality between Palestinians and Israelis. Perhaps Trump has provided the opportunity for them to lay out what a truly just and equal one-state, or binational, or confederal, or two-state solution would look like.
In any case, only a complete break with the failed strategies of the feeble leaderships in Ramallah and Gaza can provide a genuine alternative to the grotesque future of unending dispossession and oppression that Trump and Netanyahu envision for them.