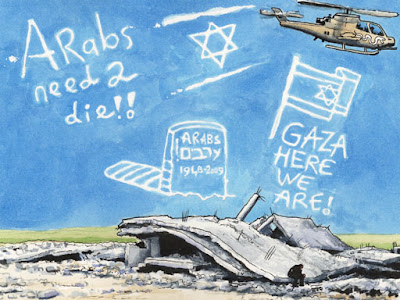 (Click on cartoon by Steve Bell, The Guardian, to enlarge)

"28/01/2009 A painful reminder for the Israeli aggression remained evident in Gaza in the form of blatant, racist graffiti sprayed on houses' walls by Israeli occupation soldiers.

Residents of the Zeitun neighborhood who returned to their homes once the offensive in the region was over discovered that their walls had been sprayed with slogans such as "Die you all," Make war not peace," "Death to Arabs," "Arabs must die," and "One down, 999,999 to go."

Some of the graffiti was sprayed on the ruins of the homes of the al-Samuni family, who lost dozens of its members during the war.

In response to the report, an Israeli occupation army spokesman claimed: "This is not how IDF soldiers are educated. This goes against the IDF's ethical code. The matter is being investigated and those responsible for it will be severely reprimanded." "
Posted by Tony at 3:25 AM