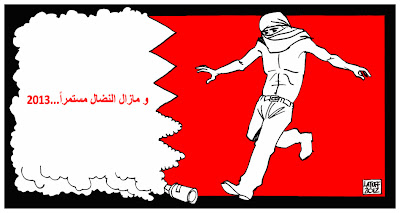 "EARLIER this month, Aqeel Abdul Mohsen, 19, was shot in the face for protesting against Bahrain’s government. He was covered in blood, with the lower side of his face blown open, his jaw shattered, and a broken hand hanging awkwardly from his wrist. It’s one of those images that you wish you had never seen, and can never forget.

After more than 10 hours of surgery, and before Mr. Abdul Mohsen regained consciousness, his hospital room was already under guard by the police. Had he been able to speak, he might even have been interrogated before going into surgery. Others have lain bleeding without medical attention while government security agents asked questions like: “Were you participating in a protest? Who else was with you?”

Bahrain, a small island nation off the coast of Saudi Arabia, has been ruled by the Khalifa family for more than 200 years. It is also home to the headquarters of the United States Navy’s Fifth Fleet, which patrols regional shipping lanes, assists with missions in Iraq and Afghanistan and monitors Iran as tensions in the region mount.

The oppressed people of Bahrain joined the Arab Spring soon after the fall of President Hosni Mubarak in Egypt. With newfound hope, Bahrainis took to the streets on Feb. 14, 2011. Rich and poor, Shiite and Sunni, liberal and religious, they felt what it was like to speak freely for the first time in the capital, Manama, at a traffic circle with a pearl monument at its center. The Pearl Roundabout came to symbolize the Bahraini revolution.

this is a great site.i am also glad to visit this site.