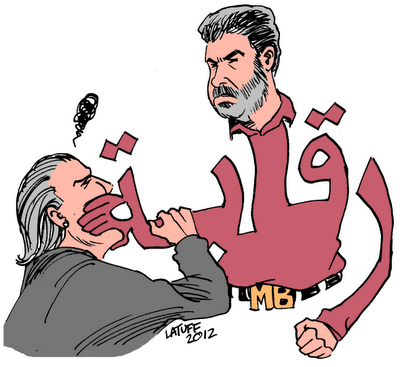 "Some Egyptian diplomats and media personnel have complained that they are being pressured by their bosses into refraining from criticising Egypt president Mohamed Morsi.

Opposition forces have frequently accused Morsi of attempting to curb freedoms since the influential Muslim Brotherhood group propelled him into office in Egypt's first freely contested elections earlier this year.
“I was summoned into the office of the assistant (foreign) minister; he said we were all partners in making the (January) Revolution a success and now we should be sensible to help the president deliver the hopes and dreams of the Revolution," said a young diplomat about what he considered as an explicit warning by his boss.

"He added a few incoherent words about the national role of the foreign service, its independence and so on; then he asked me to be ‘careful’ and not to confuse my role as a diplomat with that of an activist."
According to this diplomat, who asked for his name to be withheld to spare the disclosure of the identity of his boss, other young diplomats were given the same warnings.

“One of them was told that his overt opposition to the president would undermine his chances to go a good post and another was told that the minister (of foreign affairs) is so angry with his ministry being looked at as disloyal by the president,” the same diplomat added.
During the past few weeks, some diplomats have declined to bow to orders issued by Foreign Minister Mohamed Kamel Amr to promote the president’s political choices, Ahram Online has learnt......"
Posted by Tony at 5:44 AM

These programs have been structured in a way to provide general medical education as well as specific physical
therapy courses. Moreover, once you start disliking your partner,
even the smallest of their mistakes seem blunders
to you and ultimately it would led to differences between both of you.
Whether your goal is weight loss, fitness, overall good health, or proper nutrition, the modern
physical therapist is qualified to conduct an overall health evaluation so they
can customize a program that is appropriate for
your current health status.
Also visit my web site comorbid depression and anxiety when and how to treat