Senior Syrian official in US and co-operating with intelligence agencies


Guardian understands that US intelligence officials helped Jihad Makdissi to flee, though details of journey are unknown 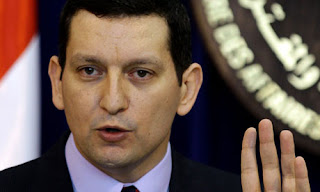 "The Syrian government's former spokesman, Jihad Makdissi, is co-operating with US intelligence officials who helped him flee to Washington almost one month ago, the Guardian understands.

Makdissi became one of the most prominent regime defectors in late November when he left Beirut after first crossing from Syria. The Guardian reported at the time that he had fled for the US, possibly in return for asylum. This has now been confirmed.


The latest development comes after almost a month of debriefings, which have helped intelligence officials build a picture of decision-making in the inner sanctum of the embattled regime......"
Posted by Tony at 11:21 AM