In his statement via Twitter, Latuff condemned the opression practiced against artists and journalists in Egypt. "Solidarity with cartoonist Doaa El-Adl who is charged with critising Islamists," he said.

Latuff drew the veiled Egyptian cartoonist holding her sharpened pencil like a spear to defend her from the attack by an Islamist, which Latuff drew waving his sword angrily at the young artist. "She is being harrassed by Islamists," he added. 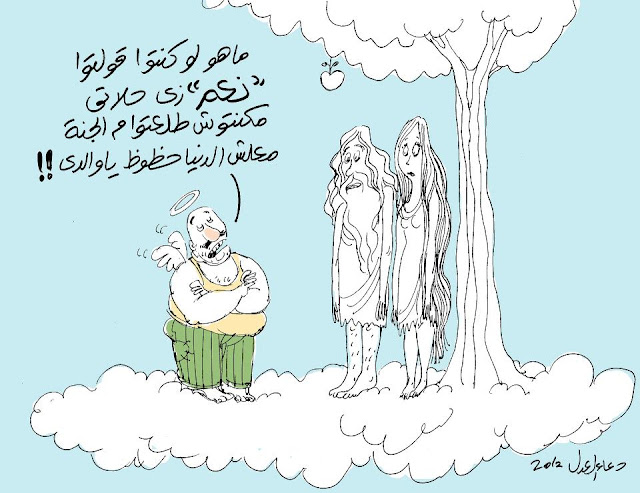 Published in Al Masry Al Youm on 20 December, El-Adl portrayed Adam and Eve standing under the tree after they were kicked out of heaven because of their vote in the referendum.
Next to them is a happy angel telling them in Arabic, "If you had voted yes in this referendum the way I did, you would have enjoyed heaven." El-Adl's recent piece had followed another with an Islamist inside the poll box kicking out votes against the constitution......"
Posted by Tony at 11:12 AM

"Islamophobia" is now used pretty much as the Zionists use antisemitism to smear all opponents.

Why not deal with the issue at hand, which is the intolerance of Islamists to free expression?