Are Israel and the U.S. Becoming Fascist States? 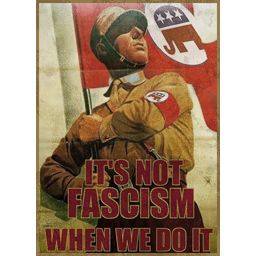 "......The only area in which Israel and the United States are demonstrably not fascist is their avoidance of dictatorship, though even that is not as clear cut as it might be. The United States has, to be sure, two major parties that alternate in power, but both are wedded to a similar statist agenda, which is particularly evident in the area of foreign policy, where there is a national consensus in support of aggressive militarism. The concept of the unitary executive, embraced by both Democrats and Republicans, is intrinsically dictatorial in nature and there are legitimate concerns that another major terrorist attack inside the United States could well tip the balance to presidential rule by fiat with a complaisant congress, media, and supreme court following along behind. Israel likewise has a number of viable political parties, but the movement politically speaking has been to the right and one might argue that the national consensus is clearly hard right wing with Likud dominant. The only question decided in elections is just who the other players might be in the government coalition and lately they have been even more extreme than Likud.

So it would appear that the answer to the question whether Israel and the U.S. are developing into fascist-style states would have to be a qualified yes, meaning that they are not quite there yet but all the indicators are pointing that way....."
Posted by Tony at 7:53 AM