One million Syrians in need of food aid: U.N. 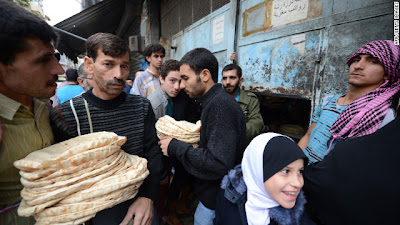 "(Reuters) - About one million Syrians are going short of food, most of them in conflict zones, due to government restrictions on aid distribution, the United Nations said on Tuesday.

The U.N.'s World Food Programme (WFP) is handing out rations to about 1.5 million people in Syria each month, still short of the 2.5 million deemed to be in need, WFP spokeswoman Elisabeth Byrs said.
Bread and fuel particularly are in short supply.

The WFP is unable to step up assistance as only a handful of aid agencies are authorized to distribute relief goods in Syria, where more than 60,000 people have been killed during 21 months of conflict.
"Our main partner, the (Syrian Arab) Red Crescent, is overstretched and has no more capacity to expand further," Byrs told a news briefing in Geneva.

Long lines in front of bakeries are now normal in many parts of Syria and there are reports of shortages of wheat flour in most parts of the country due to damage to mills, most of which are located in the embattled Aleppo area, she said......"
Posted by Tony at 7:15 AM