Canadians on hunger strike in Egyptian jail claim they were beaten 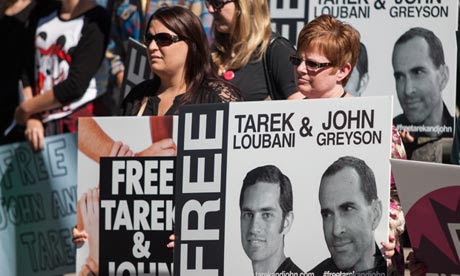 Supporters of John Greyson and Tarek Loubani call for their release at a protest in Ontario, Canada. Photograph: Mark Spowart/Demotix/Corbis

"Two Canadians on hunger strike inside an Egyptian prison have been beaten during their six-week-long detention, the pair have said in statement smuggled out of their jail cell.

Filmmaker John Greyson and medic Tarek Loubani were arrested during disturbances in Cairo on 16 August, and detained without charge ever since. The case has become a cause célèbre in the west with actors Alec Baldwin and Charlize Theron among thousands calling for their release. But little was known about either the circumstances of their arrest or their treatment inside the notorious Tora prison south of Cairo.

In their statement, posted on the website of a friend, Greyson and Loubani said they were arrested after watching a pro-Morsi protest near their hotel that turned into Egypt's fourth state-led massacre since the overthrow of Mohamed Morsi in July. Loubani and Greyson were on their way to Gaza, where they planned to train Palestinian doctors, but had been held up in Cairo because of the political upheaval there.

The pair say that once the shooting started Greyson began to document the massacre, while Loubani treated some of the wounded – and that both witnessed the deaths of around 50 unarmed citizens. They do not say exactly where they were, but it is likely to have been at or near the al-Fath mosque – a building where medics treated injured Morsi supporters, and which later came under siege from soldiers and policemen.

Leaving the site in the evening, the pair say they stopped to ask for directions at a checkpoint. "That's when we were: arrested, searched, caged, questioned, interrogated, videotaped with a 'Syrian terrorist', slapped, beaten, ridiculed, hot-boxed, refused phone calls, stripped, shaved bald, accused of being foreign mercenaries," their 600-word statement said.

"They screamed 'Canadian' as they kicked and hit us. John had a precisely etched bootprint bruise on his back for a week."

After being arrested, Loubani and Greyson said they were taken to Tora prison on the outskirts of Cairo, where they have been held without charge ever since. They were kept for several weeks in a cockroach-infested cell with 36 other people. Now sharing with six other detainees, the pair have been on hunger strike for nearly a fortnight in order to draw attention to their cause.

"We deserve due process, not cockroaches on concrete," their statement ends. "We demand to be released."

Greyson is the director of several feature films and a film professor at a Canadian university, while Loubani is an emergency room doctor who has been spent time in Gaza.

Egypt's prosecutors continue to refuse to say on what charges the pair are being held, and have denied several Guardian requests to interview them in prison.

They were among dozens of journalists to be arrested or assaulted in Egypt this summer, as suspicion from Egyptian civilians and officials of foreigners – and in particular foreign media – peaked. Greyson and Loubani are likely to have attracted more suspicion than most because they lacked accreditation from Egypt's press centre, carried video evidence of extreme state wrongdoing, and were on their way to Gaza – a place associated in the minds of many opponents of Mohamed Morsi with the Muslim Brotherhood.

Thousands of Egyptians also remain in jail after a series of arbitrary arrests this summer – many of them uncharged. They include al-Jazeera's Abdullah al-Shami and Mohammed Badr, and Ahmed Abu Deraa, one of the few reporters based in Egypt's lawless Sinai peninsula. Abu Deraa faces a military trial for reporting on alleged army abuses in its counter-insurgency campaign in the region."
Posted by Tony at 8:03 AM