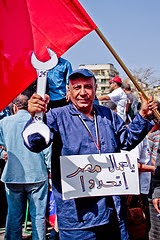 "CAIRO, Oct 1 2013 (IPS) - Egyptian workers who mobilised during the 2011 uprising that toppled the regime of Hosni Mubarak have used the past two and a half years to organise into unions, press for labour reforms, and strike for better wages and working conditions.
But they face an uphill battle against a state that continues to restrict labour freedoms and to promote Egypt as a cheap-labour, business-friendly destination.

“Nothing has changed,” says journalist and labour activist Adel Zakaria. “The government is still not willing to give workers their rights… and overlooks labour violations under the pretext of attracting investment.”

“The military and feloul (remnants of the old regime) have worked to keep workers from exercising their rights, including the right to organise into unions or strike,” says Ramadan. “They have claimed that strikes are hurting the economy, but it is not for workers to forfeit their rights in order to protect the interests of business tycoons.”"
Posted by Tony at 4:06 AM