Sudan protesters call for president Omar al-Bashir to step down 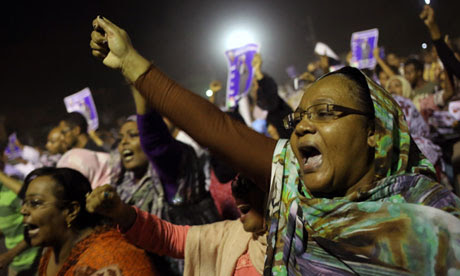 Sudanese anti-government protesters chant slogans during a demonstration in Khartoum on Sunday. Photograph: Khalil Hamra/AP
"Thousands of Sudanese protesters have taken to the streets of the capital, Khartoum, chanting "freedom" and renewing calls for their longtime autocratic president to resign after dozens of people were killed in a week of demonstrations prompted by austerity measures.

The government, which has imposed a media blackout, moved to appease the rancour with cash, saying it would distribute money to half a million families to offset higher fuel and food prices in a country where nearly half the population lives in poverty.

The street demonstrations, which began after subsidies were lifted last week, have been the most widespread in Sudan since Omar al-Bashir seized power 24 years ago.

Waving pictures of protesters who died, thousands of people held a memorial on Sunday night for Salah al-Sanhouri, a demonstrator shot on Friday during an earlier protest in Burri, an old Khartoum district.

Women called for the end to the regime and chanted "freedom, peace and justice".

Residents cheered on the marchers from rooftops while nearby security forces were stationed in pickup trucks carrying mounted machine guns near the spot where al-Sanhouri was shot.

"The protests will continue and will reach a general strike. This is our aim," said Ghazi al-Sanhouri, a nephew of the dead protester. "We will keep uncovering the regime's brutal tactics in suppressing the protests by killings and atrocities."

Al-Sanhouri's father, Moudthir al-Reih, said: "This regime will come to an end … God willing it will be over."

Public discontent had been growing over failed economic and political policies that led South Sudan to break off and became an independent state in 2011, taking approximately three-quarters of Sudan's oil production with it. Critics also blamed Bashir for draining the country's coffers by battling armed rebel movements on three different fronts.

The unrest began in the city of Wad Madani, south of Khartoum, but quickly spread to at least nine districts in Khartoum and seven cities across the country.

The crackdown on thousands of protesters has left at least 50 dead, according to international rights groups. Doctors and activists put the death toll higher, claiming it stands at more than 100. The government has acknowledged 33 have died, including police officers.

In a latest blow to freedom of the press, Sudanese authorities also forced the country's largest daily newspaper, al-Intibaha, to stop printing, according to the paper's website. The country's largest paper is owned and run by an uncle of Bashir, Al-Tayab Mustafa. Mustafa could not be immediately reached.

Several dailies came under pressure to depict demonstrators as "saboteurs". The government also closed the offices of Gulf-based satellite networks al-Arabiya and Sky News Arabia. Several newspapers were ordered to stop publication while others stopped voluntarily to avoid government pressure.

"If the revolution is created by media, we have to be serious in dealing with it," he said from New York, where he was attending the UN general assembly.

Diaa Eddin Belal, editor-in-chief of al-Sudani newspaper, said editions of his paper were confiscated and they have been ordered to stop printing three times since Wednesday. Back to work on Sunday, Belal said that in one incident on Friday the papers had been on their way to distribution centres when he received a phone call from police telling him that there would be no papers that day.

"The government feels that its own existence is endangered and the press is playing a role in influencing public opinion … they want papers to turn into official gazettes that reflect only [the government's point of view with no criticism or negative feedback," he said.

In a move aimed at pacifying a frustrated public, the government said on Sunday it would distribute one-off payments to families in need, raise the minimum wage and boost public sector salaries.

The official Suna news agency reported that the minister of social solidarity, Mashair al-Dawlab, ordered 500,000 families to be given 150 Sudanese pound (£13) aid packages in early October. It also quoted the deputy finance minister as saying the public sector salary increases would start at the same time.

Meanwhile, Sudan's main labour union said a rise in minimum wages promised since January would be implemented in the next two days.

Still concerned about lingering protests, however, the education ministry said on Sunday that schools would remain closed until 20 October. Schools have been closed since Wednesday after high school students led protests against Bashir in different districts of the capital."
Posted by Tony at 3:49 AM