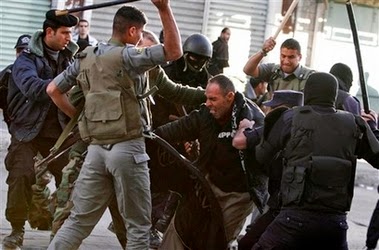 Amnesty International has urged the Ramallah-based Palestinian Authority, run by de factoleader Mahmoud Abbas, to drop criminal charges against four Palestinians arrested during a peaceful protest in support of the boycott, divestment and sanctions (BDS) movement.
The four men, Zaid Shuaibi, Fajr Harb, Fadi Quran and Abd al-Fatah Hamayel, who are due to appear in court this week, were violently attacked by Palestinian Authority police and intelligence men during a 12 April protest at the Al-Kasaba Theatre in the occupied West Bank city of Ramallah.
The protest was against a performance by a dance group that had performed in Israel the previous day. Earlier this month, Human Rights Watch also condemned the mistreatment and prosecution of the men who have come to be known as the “BDS Four.”
“Multiple witnesses gave consistent accounts of the police using unnecessary and disproportionate force against two men who were involved in the peaceful protest at a theater in the West Bank city of Ramallah, and two other men and a woman who tried to help them,” Human Rights Watch said. “Police detained the four men overnight, and they were charged the next day with ‘disturbing the peace’ and ‘provoking a riot.’”
Amnesty’s statement this week (full text below), which further details the circumstances of the violent arrest, should be seen in light of Abbas’ recent decision to sign the UNCovenant on Civil and Political Rights among other international human rights treaties.
The Abbas authority’s prosecution of the BDS activists indicates that the signing of these treaties was an empty gesture aimed at impressing an international audience and was not intended to actually protect and secure the rights of Palestinians living under joint Israeli occupation and Palestinian Authority rule.
The PA crackdown against BDS activists must also be seen in light of Abbas’ high profile opposition to the boycott of Israel, a position that has been warmly welcomed and frequently cited by Israel advocates.
Abbas was recently praised by senior US official Martin Indyk for ongoing collaboration between PA security forces on the one hand, and the Israeli occupation army and Shin Betsecret police, on the other, in spite of the breakdown of US-sponsored “peace talks.”
In April, the Palestinian Human Rights Organizations Council strongly condemned the violence and arrests of the activists and the PA’s violations of civil rights and freedom of expression.

AMNESTY INTERNATIONAL
PUBLIC STATEMENT
Index: MDE 21/003/2014
25 May 2014
Palestinian Authority: Drop criminal charges against peaceful activists, investigate police violence
Amnesty International is urging the Palestinian Authority (PA) to drop the criminal charges against four activists from the Boycott, Divestment and Sanctions (BDS) movement and to ensure an independent and impartial investigation into their alleged ill-treatment.
PA police officers and men in civilian clothes attacked and arrested the four BDS activists during a peaceful protest in Al-Qasaba Theatre in Ramallah on 12 April 2014. The four men, Zaid Shuaibi, Fajr Harb, Fadi Quran and Abd al-Fatah Hamayel, were detained in the police station in downtown Ramallah where they were allegedly subjected to ill-treatment.
Zaid Shuaibi told Amnesty International that he and his fellow activists entered the theatre to hold a peaceful protest against a show by a dance group which had performed in Israel the previous day. They said that, before the show began, Zaid Shuaibi stood up and expressed his opinion, and that of his fellow activists from the BDS movement, by explaining why they were against the show. Zaid Shuaibi told Amnesty International that he did not call for any action to be taken against the show nor did he insult anyone, but simply expressed his opinion that the performance violated the cultural boycott of Israel.
Minutes after Zaid Shuaibi spoke, he was approached by a few men in civilian clothes, one of whom, according to Zaid Shuaibi and another witness standing very close by, ordered Zaid Shuaibi and his fellow activists to keep quiet and leave the theatre, threatening to beat him up if they did not do so. The men in civilian clothes did not identify themselves or present Zaid Shuaibi with any indication that they were law enforcement officers. Not knowing who they were, Zaid Shuaibi did not obey the order. Subsequently, when a uniformed policeman asked him to leave the theatre, he did so without resistance. Despite this, the policeman grabbed Zaid Shuaibi by his neck in a violent manner and one of the men in the civilian clothes punched him on the back of the head.
Zaid Shuaibi told Amnesty International that, as soon as he was out of sight of the crowd and cameras in the theatre, the men in civilian clothes, as well as police officers, began to beat him up and continued to do so until he was put into a police car outside the theatre. Fajr Harb, Fadi Quran and Abd al-Fatah Hamayel were arrested for protesting against the beating of Zaid Shuaibi and were put in the same police vehicle as him.
All four men were taken to the police station in downtown Ramallah and were denied access to lawyers. During their detention there, they said that they witnessed the police beating other detainees and were pressured to sign a statement in order to be released, conditions which they described as threatening. When the men refused to sign the statement they were kept in detention and presented the next day to a judge, who read their charges to them in court. This was the first time the men were allowed access to their lawyers. The four were charged with criminal offences set out in Jordanian Penal Code No. 16 for 1960, including “disturbing the peace” and “disturbing public order”, but were released, pending a court hearing scheduled for 28 May 2014.
Amnesty International emphasizes that peaceful expression and protest must never be punished as criminal offences and that imprisonment is always a disproportionate restriction on freedom of expression. Furthermore, the reported treatment of the four men once in custody has undermined their right to a fair trial and raises concerns that they are being punished for their political protest. We urge the PA to drop the criminal charges against them and to ensure an independent and impartial investigation into their allegations of ill-treatment.
Posted by Tony at 7:51 AM