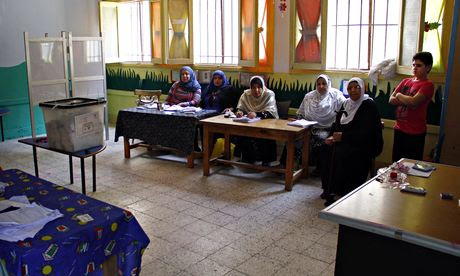 Election workers wait for voters at a polling station in Suez. Photograph: Ahmed Abdel Fattah/AP
The decision to extend Egypt's presidential run-off into a third day has seriously harmed the credibility of the poll, one of the election's main international observers has claimed.
The election was scheduled to end on Tuesday night but officials extended it by 24 hours amid concerns about a lower-than-expected turnout.
Democracy International, a US-based firm with 86 observers currently in Egypt, said the extension "raises more questions about the independence of the election commission, the impartiality of the government, and the integrity of Egypt's electoral process."
It said it had withdrawn its short-term observers, though other international monitors including the EU said they would continue as normal.
Egypt's electoral commission cited a heat wave on Tuesday as the reason for extending the process, with millions said to have been put off voting by temperatures as high as 42C.
But a wave of panic among television hosts and businessmen partial to the election's presumptive winner, the former army chief Abdel Fatah al-Sisi, suggested another reason: a disappointing turnout.
The extension followed the government's last-minute decision to make Tuesday a public holiday, and a decision by the owners of Cairo's most famous mall, City Stars, to close it early to encourage shoppers to vote instead.
"She should get shot," shouted a popular pro-army talkshow host, Tawfik Okasha, imagining a hypothetical housewife who had used the holiday to shop instead of vote. He then added: "She should shoot herself."
Sisi's campaign publicly condemned the election's extension, and he is still expected to win handsomely. In the last three days of reporting, the Guardian has only met one voter who would admit to supporting Sisi's opponent, the workers' activist Hamdeen Sabahi.
But a low turnout would undermine the Sisi campaign's claims that he is backed by an overwhelming majority of voters.
It is unclear to what extent the turnout was affected by a boycott by theMuslim Brotherhood, whom Sisi removed from power last summer, and by secular activists, who say fair elections are impossible amid an ongoingcrackdown on dissent. It is just as likely that many voters stayed away out of indifference to a political process that has included seven elections and two overthrown presidents since 2011 while leading to poorer living standards.
"People don't feel any elections have made any difference," argued Ahmed Hassan, 27, a dentist who said he would not bother to vote. "I'm not boycotting, I just don't care. There's no point. They've proved that our involvement is not important."
Hassan laughed at the suggestion that an extension was needed to allow more people to vote. "It's hilarious. They're supposedly extending it for a third day to accommodate the crowds, but in fact it's the opposite."
At nearby polling stations in schools in Dokki, west Cairo, the empty playgrounds suggested Hassan had a point. "What low turnout?" deadpanned Amira Mohamed, a 31-year-old accountant and Sisi voter as she left one deserted station. "It's been very crowded."
The police captain overseeing proceedings agreed. "It's a good idea, this extension," said Captain Mohamed Mahmoud. "It gives another chance to the people who didn't have time to vote before."
But the silent playground behind him hinted at a different reality. Amira Mohamed was one of only four voters (all for Sisi) in 20 minutes.
Across town at another empty polling station, another Sisi voter was more frank. "Whoever wants to vote would have done so already," said a 70-year-old film director who gave her name as Mona.
Official turnout figures have yet to be released, but it is unlikely that they will end up lower than the percentages from Egypt's other elections since 2011. Even in the 2012 presidential elections, which were conducted in a freer environment and followed a far livelier campaign, the turnout was only 51.9%. Two years on, anything approaching that figure might be considered respectable.
But Sisi and his supporters may still be alarmed that the turnout has not matched their optimistic forecasts. In an interview conducted in the days before the polls opened, Sisi said he hoped for a turnout of 40 million to show that "there is a consensus on a national level" – an ambitious figure that would far outstrip turnouts in other post-2011 elections.
Mostafa Bakry, a loudmouth pro-Sisi TV personality, expressed amazement that this week's turnout might not have matched the 40 million protesters whom Sisi loyalists like to claim marched in favour of the field marshal at the end of last July.
"What happened?" wondered Bakry, perhaps contemplating for the first time that his previous estimates of Sisi's diehard support base might be have been too high.
Yasser El-Shimy, an Egypt-focused academic at Boston University, said the panic stemmed from fears that Egypt's new authorities might not achieve as popular a mandate as Mohamed Morsi – the man Sisi ousted last July – obtained in the 2012 elections.
"A low turnout runs contrary to all the narratives about the overwhelming popular support not just for the removal of Morsi but also for the crackdown that ensued against political opponents from all stripes," said El-Shimy. "This would make for a legitimacy deficit, just as the new regime was hoping to use this election to cement its claim to rule."
Asked to comment on Democracy International's claims, a spokesman for Egypt's foreign ministry stressed the impartiality of the electoral commission, and referred to the commission's statement that cited the heatwave as a reason for extending the vote.
Posted by Tony at 6:57 AM