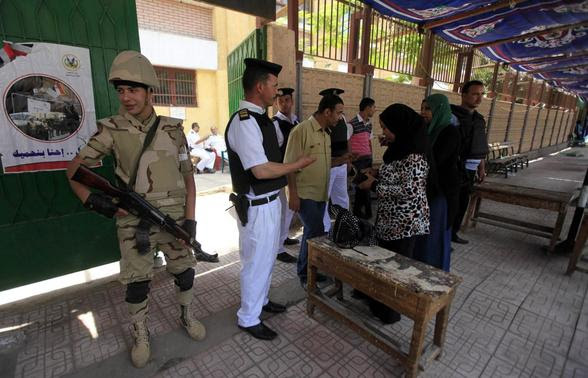 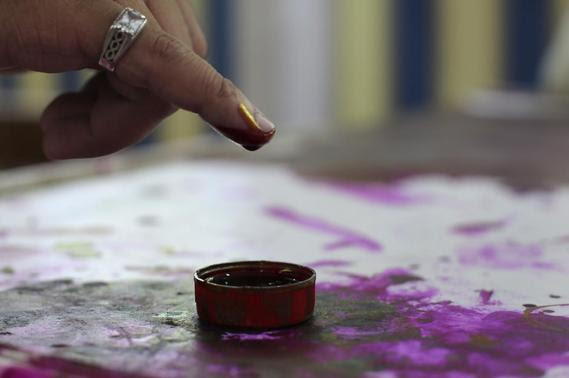 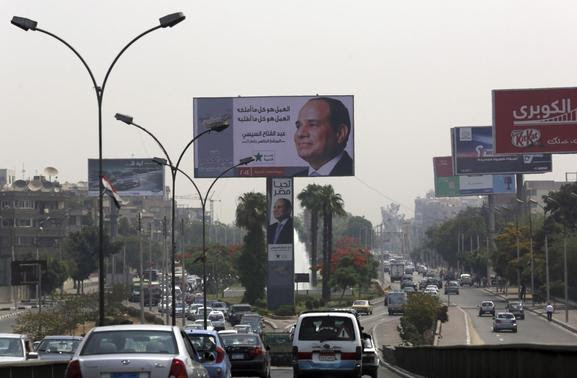 1 OF 4. Voters present papers at a polling station in the El Sayda Zeinab area on the third day of voting in the Egyptian presidential elections in Cairo, May 28, 2014.
CREDIT: REUTERS/AMR ABDALLAH DALSH

(Reuters) - Egyptians cast their votes in a presidential election on Wednesday that is certain to install former army chief Abdel Fattah al-Sisi as president, but his call for an overwhelming mandate did not appear to have been heeded by voters.
Tareq al-Shibl, a member of the election committee, was quoted by al Ahram, a state-run newspaper, as saying that more than 21 million people voted, or nearly 39 percent of an electorate of 54 million.
That would be less than the 40 million votes, or 80 percent of the electorate, that Sisi had called for last week.
However, a Western diplomat following the vote put the turnout at between 10 million and 15 million votes, which would equate to between 19 and 28 percent of the electorate, much less than the official projection.
The counting of the votes started late on Wednesday, a few minutes after the ballots closed. So far Sisi is in the lead, according to local TV coverage of the counting.
The lower turnout figure threatens to undermine Sisi's credibility as leader of the Arab world's most populous nation.
It would also suggest that he had failed to rally the support he hoped for after toppling Egypt's first freely elected president, Islamist Mohamed Mursi, following street protests last year.
A tour of Cairo polling stations on Wednesday saw only a trickle of voters. The same pattern emerged in Egypt's second city, Alexandria, Reuters reporters said.
In a country polarized since a popular uprising toppled Hosni Mubarak in 2011, the lower than expected turnout was linked to political apathy, opposition to another military man becoming president, discontent at suppression of freedoms among liberal youth and calls for a boycott by Islamists.
The two-day vote was originally due to conclude on Tuesday but was extended until 9 p.m. (1800 GMT) Wednesday to allow the "greatest number possible" to vote, state media reported.
"The state searches for a vote," said a front-page headline in privately owned Al-Masry Al-Youm newspaper.
ELECTORAL PROCESS
The Democracy International observer mission said the decision to extend polling raised questions about the integrity of Egypt's electoral process.
“Last-minute decisions about important election procedures, such as a decision to extend polling by an additional day, should be made only in extraordinary circumstances,” Eric Bjornlund, president of Democracy International, said in a statement.
Sisi's campaign posted pictures of long lines of voters, some waving Egyptian flags and holding posters of Sisi. "Come out and raise the flag of your country," it said on Facebook.
A 45-year-old Cairo shopkeeper, who gave her name as Samaa, said at a polling station in downtown Cairo she was supporting Sisi. "Our country can now only be handled by a military man, we need order."
But no long queues could be seen. An army officer reading a newspaper outside the same Cairo polling station said: "You want to speak with voters? Do you see any voters? I don't know why they're not coming, maybe they reject politics."
Khaled Dawood, a liberal activist, accused the electoral commission and the government of running a chaotic election.
"The feeling is that the result is known in advance and this kind of festival they were creating for Sisi backfired because people no longer buy into this propaganda.
"People in Mubarak's day did not participate because they knew that their vote wouldn’t make a difference and that is what is happening now," he said.
Despite an official campaign to bring out more voters, Egyptians, many opposed to Sisi, gave various reasons for their lack of enthusiasm.
The Muslim Brotherhood, believed to have one million members, has rejected the poll, describing it as an extension of the army takeover. The group, loyal to Mursi, was outlawed by the military as a terrorist group and saw around 1,000 members killed in a security crackdown.
"Holding these elections is null and void under the military coup ... It cannot be legitimized by elections or in any other way," said Muslim Brotherhood member Mohamed Abdel Hafeez.
Young secular activists, including those who backed Mursi's ouster, had become disillusioned with Sisi after many were rounded up in the security crackdown that also restricted protests.
"The low turnout is a slap in the face for Sisi. I hope he now sees that he only has the votes of old women and men but not us, the youth, who are the majority in this country," said Mohamed Ahmed, 26-year-old employee in a private firm in Cairo.
MORE AUSTERITY
Since he gave a series of television interviews, many Egyptians feel Sisi has not spelled out a clear vision of how he would tackle Egypt's challenges, from widespread poverty to an energy crisis and an Islamist insurgency.
Some Brotherhood supporters felt emboldened to speak out, feeling vindicated by the lower turnout.
"Now I can say I am a Mursi supporter," said Ahmed Ali, a 28-year-old Cairo shopkeeper.
Unlike the previous election which brought Mursi to power and was contested by a dozen candidates, Sisi faces only one rival: leftist Hamdeen Sabahi, whose campaign rejected the extra day of voting.
The justice ministry said Egyptians who did not vote would be fined, and train fares were waived in an effort to boost the numbers. Local media loyal to the government chided the public for not turning out in large enough numbers, and Muslim and Coptic Christian religious leaders also urged people to vote.
In the Sinai, where Egypt's most dangerous militants are based, gunmen killed an Egyptian soldier, security sources said.
In an eastern district of Cairo, gunmen opened fire at an electricity station in what the electricity ministry called a terrorist attack.


Egypt is suffering from almost daily power cuts as it faces a massive energy crunch.
Posted by Tony at 12:28 PM