Egypt accused of coverup over police killing of unarmed protester 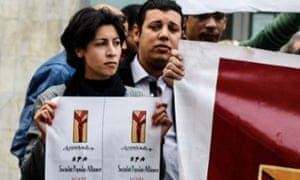 Shaimaa al-Sabbagh, a poet and activist, moments before she was shot at a protest in downtown Cairo. Photograph: Mohammed El-Raaei/AP


Egyptian prosecutors have been accused of two separate coverups after announcing that a policeman would face only a manslaughter charge for the notorious killing of an unarmed female protester earlier this year, and that no official would be prosecuted for the deaths of at least 19 football fans in stadium violence that occurred a fortnight later.
Shaimaa al-Sabbagh, a poet and activist, was killed as she attended a demonstration in downtown Cairo in January, leading to international and domestic outrage after footage and photographs seemed to show her being shot in cold blood.
Prosecutors on Tuesday said the police officer would face the lesser charge of “shooting that led to death” – an accusation akin to manslaughter – sparking accusations of a coverup.
Sabbagh’s fellow protesters will be tried with organising an illegal demonstration, although initial investigations into their involvement in her murder have been dropped.
In the same announcement, prosecutors said police were not to blame for the deaths of Zamalek SC supporters in a stampede outside a football ground in February. Video footage showed the incident began after police fired teargas into an alley in which hundreds of fans were tightly packed.
In a statement, the state prosecution claimed the banned Muslim Brotherhood caused the deaths in collaboration with the fans themselves “as part of its attempt to bring down the country’s pillars of stability”.
The statements outraged government critics, who see them as the latest in a series of coverups that allow the police to avoid being held accountable.
Azza Matar, a member of Sabbagh’s political party who accompanied her body to the morgue, said: “It’s impunity, another way of [achieving] impunity. The videos show clearly the officer in charge pointing at Shaimaa and seconds later we can hear the shot. This is a joke.”
While thousands of civilians have been killed on dozens of occasions since the 2011 revolution, few police officers have been prosecuted for their role, and only one has been given a lasting conviction.
Matar added: “If officers are held accountable it will set a precedent. And they don’t want that. We would have to go back to [investigating] the deaths of people in the revolution and they will not open that door.”
A survivor of the Zamalek footballing disaster also criticised the failure to prosecute police officers for their involvement. Saad Abdelhamid, 27, a salesman, said: “They are cooking the case and acquitting the killer for, what, the 50th, 100th, 1,000th time? The regime has stayed the same since January till now, acquitting its repressive self from any security, criminal or political responsibility for any event.”
The group’s Egypt spokesman, Mohamed Elmessiry, said: “The decisions by the public prosecutor today in the cases of Shaimaa al-Sabbagh and the Air Defence stadium are completely disgraceful.Amnesty International also contrasted the impunity usually afforded the police with the draconian sentences meted out for similar charges to hundreds of opposition members in the past 18 months.
“Egypt’s criminal justice [system] is dysfunctional, biased and cannot be relied upon any more as a means to achieve justice. Since 3 July [2013, when current president Abdel Fatah al-Sisi deposed his predecessor] hundreds of activists have been sentenced to death or given life sentences based on scant and flimsy evidence in deeply flawed trials. At the same time the judiciary appears to be doing its utmost to cover up and clear security forces of any criminal responsibilities.”
In a third controversial case on Tuesday, prosecutors claimed that a well-known activist who was allegedly tortured to death by police in February 2013 had died in a car accident.
Spokesmen for the Egyptian government deny any judicial impropriety, and have frequently praised “the independence, fairness, and transparency of Egypt’s judiciary”.
Posted by Tony at 4:25 PM