Can anyone stop the killing in Syria?

As the last five years have shown us, the bloodier the change, the worse the outcome. 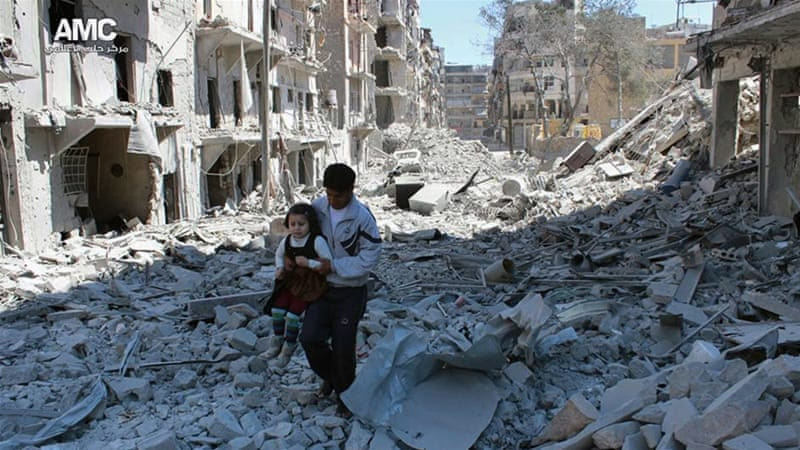 
Perhaps I should have seen it coming. I didn't. I was dumbstruck. To explain the effects of psychological violence on Syrians, a Syrian scholar gave us an example during the "Conference on Violence and Politics in Contemporary Arab Societies".
It's a "personal anecdote" he said, as he moved closer to the microphone. "When I told my sister that she must find a way to escape, she said she wouldn't/couldn't move an inch after the beheading of my nephew as he tried to escape the violence."
As the words echoed in the room, I couldn't tell if I heard right until I looked at the sympathetic faces around me. In retrospect, the revelation was as sobering as it is shocking.
Most of the academics, intellectuals and journalists who gathered here in Tunis this week, have had first hand experience with violence. Iraqis, Algerians, Libyans, Palestinians, Egyptians, and others shared similar insights, shaped in no small part by a bitter dose of realism. They prescribed remedies to the imploding situation in the region (which I will discuss separately), but no one had illusions about the monumental challenges ahead. Not even the Tunisian attendees.
Not least for Syria and Syrians.
Unlike those Arab intellectuals, who are mindful of human suffering, the regional and international leaders involved in Syria have proven to be either terribly insensitive or outright psychopaths. In other words, they clearly don't care how their policies harm ordinary people.
Saving Assad
The choice was clear from the outset: sacrifice Assad to save Syria, or sacrifice Syria to save Assad. The regime embraced the latter to preserve itself and more than 100,000 Syrians died in the process. No regrets, no hesitation. None whatsoever.
When it failed, Iran and its Lebanese ally, Hezbollah stepped in to save the Assad regime, and in the process another 100,000 or more died. No worry, no sorry. None.
As that effort also failed, and the regime continues to bleed, Russia has stepped in under the same pretext: Only by saving Assad could the Islamic State of Iraq and the Levant (ISIL) be defeated and Syria saved, contends President Putin.
So, will 100,000 more Syrians die to show that Assad can no longer rule over Syria?
Filling the void
Ever since President "No Drama" Obama decided to back off from his threat to hit the Syrian regime following its use of chemical weapons, the American president has argued, rather poorly, that it was in Syria's best interest not to interfere; that outside involvement was no remedy for the country's civil war.
But instead of putting the US' weight behind a political solution, he chose to start a long-term bombing campaign against ISIL - 6,000 sorties and counting. To no avail, alas. In the process, ISIL has become an alibi for who's who to interfere in Syria as long as they steered away from the regime.
Related: Cameron's refugee calculation
And Syria, Iraq, and the entire Middle East region re-emerged as the landscape for a renewed so-called "war on terror", where the US led the way and Assad, Rouhani, Sisi, and Abbadi are privileged members.
Russia saw an opportunity and stepped in rather aggressively to reshape the scramble for Syria.
Is Moscow acting unilaterally to take ownership of the Syrian regime? Is it complicit with Iran to expand its influence in the region? Or, is it coordinating its actions with Washington to pave the way for a political solution?
Bad to worse
Russia could be taking the military lead in order to spearhead a diplomatic process that bridges the Iranian-American divide over Syria; one that phases out Assad but preserves the regime (along with the Russian-designated "healthy" part of the opposition) under its tutelage. Lacking any credibility among Syrian opposition, if Russia has such wishes, they could prove mere wishful thinking. That is unless the commitment to remove Assad & Co is ironclad.
RELATED: Syria war exposes the failure of power games
Russia could also be trying to phase out Iran or partake in its influence over the Syrian regime following the signing of the nuclear deal. If it's true, Moscow will discover, sooner rather than later, that it can't succeed where Tehran has already failed. In the process, many more will die in vain.
(Speaking of another Afghanistan might be premature, but then, who could have imagined we would be here five years ago?)
Lastly, Russia might also be taking advantage of Western indifference towards Syria by aligning their strategies with Tehran in support of the Syrian regime. Such scenario will prove most costly to Syria and Syrians as the country continues to fall apart.
Which of these scenarios is most plausible is unclear. But if US leaders continue to play innocent (read stupid) and Europeans continue to play catch up, Russia's foul play is sure to pave the way for another bitter and bloody chapter in Syrian history.
Tunis to Syria
It's clear at this point in time that there are no good options for Syria; that the sweetest among all plausible scenarios is bitter. But the record also shows that quick and peaceful transition as here in Tunisia has proven the least costly among the Arab nations, while on the other hand, the protracted and violent change in Syria is deadly and destructive.
Indeed, the last five years of turmoil, like the previous 50 years of dictatorships, have taught us that the bloodier the change, the worse the outcome, and the longer the wait, the more complicated the change.
Marwan Bishara is the senior political analyst at Al Jazeera.
Posted by Tony at 7:13 AM