A large convoy of Russian vehicles was reportedly on the move through central Syria on Wednesday, sparking new claims that renewed Russian support for the ailing Assad regime could lead to Moscow effectively running the war.
Syrian opposition groups claimed the convoy contained Russian troops who were heading for the outskirts of the country’s third city, Hama.
The armoured trucks and personnel carriers had moved south from Latakia, on the Mediterranean coast, where Russian forces have expanded the city’s airport runway and built additional hangars to house jets and transport planes that had begun arriving in early August.
“They were heading south around mid-morning. There were lots of trucks,” an opposition source said.
Separately, the citizen journalism project Bellingcat said on Wednesday that photographs of a Russian communications-jamming vehicle in Latakia region proved that a military buildup was under way.
“Newly published images showing a Russian R-166-0.5 (ultra) high-frequency signals (HF/VHF) vehicle driving through Syria’s coastal region now leaves little to no doubt on Russia’s intentions in Syria,” the report said. “The R-166-0.5 provides jam-resistant voice and data communications over a long range, enabling Russian troops to communicate with their bases in the coastal strongholds of Tartus and Latakia while operating far inland.”
The moves have come at a critical time for Syria’s leader, Bashar al-Assad, whose forces have, since early 2013, increasingly ceded control to its regional allies, led by Iran and Hezbollah. While Russia has been a strong political ally of the Syrian regime, its military support had mostly been limited to selling weapons and sending advisers.

“The west has been expecting players such as Russia to one day see the light and to change their posture,” said regional analyst for the International Crisis Group, Peter Harling. “But their stance has been consistent. They have been gradually escalating their support for the regime for some time.But with Syrian forces now in control of around a quarter of the country and unable to claw back losses at the hands of opposition groups and jihadists, the regime’s patrons have sharply stepped up their roles in recent months. In Damascus and in neighbouring Beirut, the boosted Russian role is seen as fortifying a swathe of the country from Latakia to the Golan Heights, which is labelled “the Useful Syria”.
“Politically, their support has been there from the beginning, but they have come to do more in the security and military sphere because the regime is eroding and this is showing increasingly. Iran don’t want to step things up further at a sensitive phase with the Americans. Hezbollah is in full deployment mode and can hardly do more.”
Hezbollah, the Lebanese militant group, whose stated goal is to oppose Israel, has sent an estimated several thousand fighters into Syria, where they are leading the Syrian army in numerous parts of the country. It is heavily deployed in the town of Zabadani, between the Lebanese border and Damascus, where the Islamist group Ahrar al-Sham, a powerful arm of the Syrian opposition, is trying to hold its ground.
Russia’s increased activity comes amid a flurry of diplomatic moves surrounding the future of Syria and international efforts to tackle the Islamic State jihadist group, which controls much of the country’s east, as well as western Iraq. In recent weeks, Moscow has hosted Saudi leaders and sent its own officials to Riyadh, while at the same time trying to rally Iran, Europe and the US to its cause. 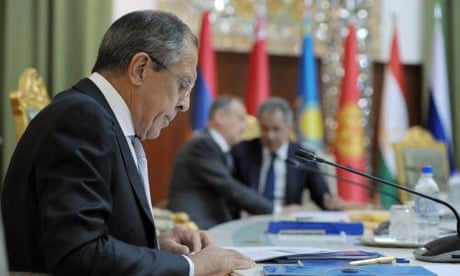 Russia proposes talks with US military over Isis situation in Syria

Read more
On Wednesday, US secretary of state John Kerry said that his Russian counterpart, Sergey Lavrov, had proposed talks between Russian and US military commanders to minimise potential clashes in a region where both forces are operating.
“The whole package is being presented by Putin as part of a global and regional endeavour to stop IS,” said Middle East analyst and associate fellow at Chatham House, David Butter. “And, as such, it should provide the basis for cooperation between Russia, the US, the Europeans and the Arabs.
“Putin has been talking a lot to Arab leaders (Sisi, Mohammed bin Zayed, and King Abdullah in Jordan), perhaps dangling the idea that Russia and the Arabs can work together to dilute Iran’s interest and destroy IS, while keeping the Assad issue vague. The Saudis have made clear they are not buying this.”

“They are doing more than supplementing the Syrians,” said a senior western official in London. “They are taking over the air war for them. The Syrians are not good at attacking ground forces.”Moscow, in July, sent six fighter jets to the Syrian government, which it said would replace Syrian air force jets shot down during the war. However, US and British officials say there is strong evidence that the revamped Latakia base will be used to ready Russian fighters for combat over Syrian skies.
The Russian intervention comes at an especially complicated time in Syria’s civil war. Battle lines between the regime and a largely homegrown opposition have remained mostly static around Damascus and Aleppo, but have been fluid elsewhere.
At the same time, Isis has continued to make inroads in the west and centre, Syria’s Kurds have seized much ground in the north as they have battled the jihadists, and Turkey has launched a bombing campaign inside Syria against both groups. Meanwhile, Britain and France are mooting joining a US-led air coalition inside Syria.
Meanwhile, Syrian opposition groups have been pushing towards the Latakia coast. “(Russia’s) first task is to make sure that the Idlib-based rebels do not make it to Latakia,” said Butter. “If rebels make it to Latakia, Tartus would come under pressure, and Russia would probably have to give up its naval access/base/facilities there.”
Russia has maintained a naval base and intelligence post in Tartus, north of Latakia, for almost 50 years. Its existence has been seen as a raison d’etre for Moscow’s staunch support of the Assad regime throughout the war.
However, senior Russian officials have repeatedly told counterparts in the Arab world that their stance stems largely from the US-led intervention in Libya in 2011, which Moscow saw as a trick and a threat to its influence.
“They are very much disrespectful of the regime as a partner and an ally,” said Harling. “But they completely share its view of the war’s cause and structure. They are anti-Islamist, anti-west and anti-democratic.
“They have been fighting a Cold War on their own, which naturally they have been winning in different ways. It plays well at home, where people have nothing but nostalgia to cling on to. They position themselves as standing up to western designs, as exemplified by Syria, and are saying to the region itself that [they] are a power to be contended with.”
Posted by Tony at 7:54 AM