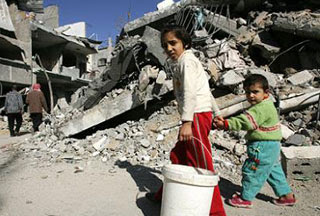 By Chris Hedges
Posted on Nov 7, 2011
"Editor’s note: Truthdig columnist Chris Hedges, an activist, an author and a member of a reporting team that won a 2002 Pulitzer Prize, wrote this article after he was released from custody following his arrest last Thursday. He and about 15 other participants in the Occupy Wall Street movement were detained as they protested outside the global headquarters of Goldman Sachs in lower Manhattan.
Faces appeared to me moments before the New York City police arrested us Thursday in front of Goldman Sachs. They were not the faces of the smug Goldman Sachs employees, who peered at us through the revolving glass doors and lobby windows, a pathetic collection of middle-aged fraternity and sorority members. They were not the faces of the blue-uniformed police with their dangling cords of white and black plastic handcuffs, or the thuggish Goldman Sachs security personnel, whose buzz cuts and dead eyes reminded me of the East German secret police, the Stasi. They were not the faces of the demonstrators around me, the ones with massive student debts and no jobs, the ones whose broken dreams weigh them down like a cross, the ones whose anger and betrayal triggered the street demonstrations and occupations for justice. They were not the faces of the onlookers—the construction workers, who seemed cheered by the march on Goldman Sachs, or the suited businessmen who did not. They were faraway faces. They were the faces of children dying. They were tiny, confused, bewildered faces I had seen in the southern Sudan, Gaza and the slums of Brazzaville, Nairobi, Cairo and Delhi and the wars I covered. They were faces with large, glassy eyes, above bloated bellies. They were the small faces of children convulsed by the ravages of starvation and disease.
I carry these faces. They do not leave me. I look at my own children and cannot forget them, these other children who never had a chance. War brings with it a host of horrors, including famine, but the worst is always the human detritus that war and famine leave behind, the small, frail bodies whose tangled limbs and vacant eyes condemn us all. The wealthy and the powerful, the ones behind the glass at Goldman Sachs, laughed and snapped pictures of us as if we were a brief and odd lunchtime diversion from commodities trading, from hoarding and profit, from this collective sickness of money worship, as if we were creatures in a cage, which in fact we soon were...."
Posted by Tony at 4:30 AM