Syria: Crimes Against Humanity in Homs 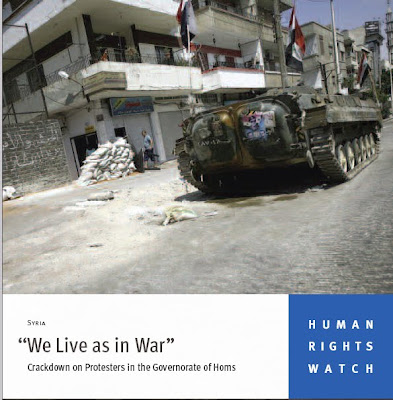 "(New York) – The systematic nature of abuses against civilians in Homs by Syrian government forces, including torture and unlawful killings, indicate that crimes against humanity have been committed, Human Rights Watch said in a new report released today. Human Rights Watch urged the Arab League, meeting in Cairo on November 12, 2011, to suspend Syria’s membership in the League and to ask the United Nations Security Council to impose an arms embargo and sanctions against individuals responsible for the violations, and refer Syria to the International Criminal Court.
The 63-page report, “‘We Live as in War’: Crackdown on Protesters in the Governorate of Homs,” is based on more than 110 interviews with victims and witnesses from Homs, both the city and the surrounding governorate of the same name. The area has emerged as a center of opposition to the government of President Bashar al-Assad. The report focuses on violations by Syrian security forces from mid-April to the end of August, during which time security forces killed at least 587 civilians, the highest number of casualties for any single governorate.Security forces have killed at least another 104 people in Homs since November 2, when the Syrian government agreed to the Arab League initiative for a political solution. Arab foreign ministers will meet in an emergency session on November 12 to discuss Syria’s failure to comply with the Arab League initiative.

“Homs is a microcosm of the Syrian government’s brutality,” said Sarah Leah Whitson, Middle East director at Human Rights Watch. “The Arab League needs to tell President Assad that violating their agreement has consequences, and that it now supports Security Council action to end the carnage.”

Homs has emerged as the most restive governorate in Syria since anti-government protests erupted in mid-March. Human Rights Watch documented dozens of incidents in which security forces and government-supported militias violently attacked and dispersed overwhelmingly peaceful protests. A woman who participated with her 3-year-old son in a protest in the Homs neighborhood of Bab Dreib on August 15 described how they came under attack....."
Download the full report (PDF, 790.94 KB)
Posted by Tony at 3:51 AM