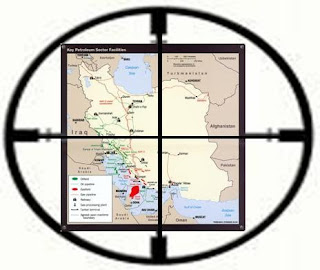 Tehran in the crosshairs
by Justin Raimondo, November 09, 2011
"If you wade through the International Atomic Energy Agency’s much-awaited report [.pdf] on Iran’s alleged pursuit of nuclear weapons technology – a fate I wouldn’t wish on anyone – what you’ll find is a studious ambiguity. “May,” “might,” and “could” are words that modify practically every assertion of Iranian perfidy.....
What jumps out at the careful reader of the IAEA report is that there is nothing concrete involved in this nefarious plot: only hearsay descriptions of blueprints and computer models, including various publicly available scientific studies authored by Iranian scientists. According to Khan, what was transferred to the Iranians was know-how: theoretical knowledge and contacts with suppliers. Yet throughout the IAEA report, although there are plenty of instances where Iran is alleged to have sought this or that dual use component, we are never told if they actually succeeded in procuring the item. While the report attributes its information to “Member States,” why will I not be surprised if this “intelligence” comes from the same folks who brought us the Niger uranium forgeries?
Although there is no smoking gun, the injection of the A.Q. Khan network into the propaganda mix at this level is a relatively new development, one that links the latest Enemy of the Moment (Pakistan) with longtime-favorite Iran. Why not kill two birds with one stone? .....
In the context of the long propaganda war the neocons have been faithfully waging over the past decade or so, we’re five minutes to zero hour.
The key to understanding the fraud at the heart of the IAEA report is the first paragraph of the summary:
“While the Agency continues to verify the non-diversion of declared nuclear material at the nuclear facilities and LOFs declared by Iran under its Safeguards Agreement, as Iran is not providing the necessary cooperation, including by not implementing its Additional Protocol, the Agency is unable to provide credible assurance about the absence of undeclared nuclear material and activities in Iran, and therefore to conclude that all nuclear material in Iran is in peaceful activities.”
Translation: the Iranians have no suitably enriched fissile material – but because they won’t surrender their sovereignty and allow us to occupy their nuclear facilities at will, there is no “credible assurance” of this. Iran is guilty, and must prove its innocence: that’s what the justice of the West means in the context of its relations with Iran."
Posted by Tony at 4:24 AM